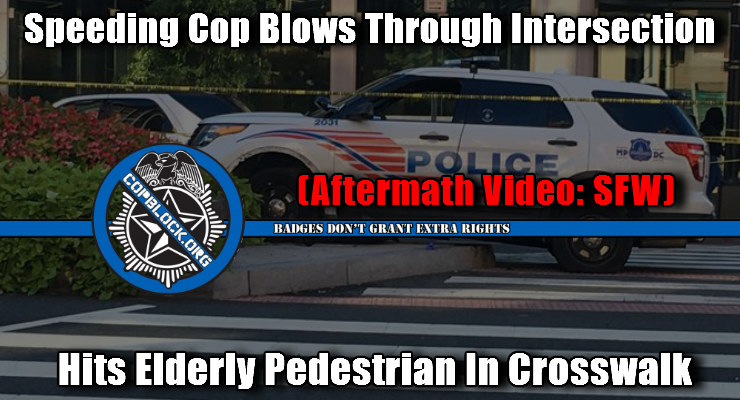 A pedestrian was struck by an on duty Washington D.C. Metropolitan Police Department Officer (MPD). Witnesses say the officer was ‘traveling at a high rate of speed’ when he drove through the intersection and struck the elderly man. The pedestrian, who was crossing the in a crosswalk, was critically injured and taken to a local hospital. His condition has since improved somewhat, and has been upgraded to ‘serious’.

The officer claims he was injured as well, as he ‘heroically swerved’, trying to miss the pedestrian, and hit a curb. He too was taken to a local hospital. The officers ‘injuries’ were not life threatening. According to one witness on scene, “the cop was flying down the road, swerved to try to miss the pedestrian, hit the curb and then hit (the victim) on the right side”.

Another witness said the Officer’s SUV was heading south on Connecticut Avenue NW with its lights and siren on when it collided with a male pedestrian crossing west to east on L Street.

“The impact was huge,” said Joan Maher, a nurse from Bethesda who witnessed the crash. She said that the impact sent the police vehicle into the concrete median and flower bed.

D.C. police could not say how fast the police car was traveling. Another interesting tidbit – the MPD does not have any information about the accident on their website or Facebook. Even though they’ll report on the most mundane incidents, it’s seems that when an officer critically injures a pedestrian, it’s not worth reporting on.

I wonder if the police officer will be charged for speeding and injuring a pedestrian? In similar articles, I’ve written about police officers hitting and killing pedestrians. Some were speeding at night, with no lights or sirens – and none of them were charged. Even the officer who was traveling at over 100 mph wasn’t charged in the death of a pedestrian. Why? All of the pedestrians that were hit/killed were not in a crosswalk.

So, I can’t help but wonder, what kind of excuse will the police come up with on this case? For more information on the examples I listed above, please read the following articles: