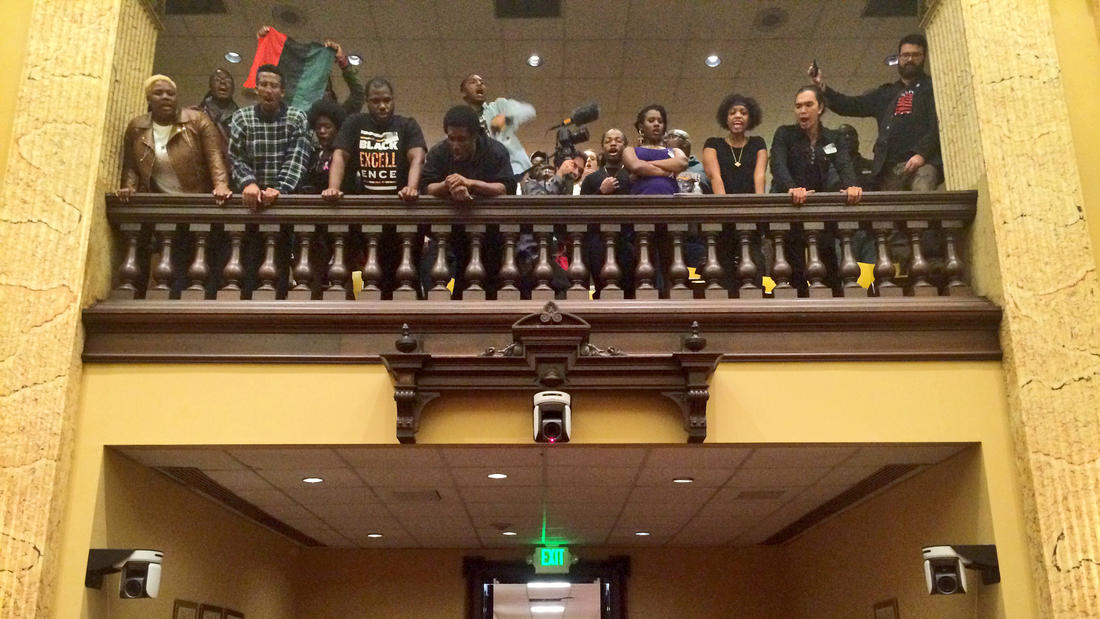 A group of anti-police brutality activists have occupied the city hall in Baltimore. The activists are part of a coalition of Baltimore area groups called “Baltimore Uprising.” This coalition includes (but is not necessarily limited to) members of Youth as Resources, Leaders of a Beautiful Struggle, The West Coalition, City Bloc, Baltimore Algebra Project, Baltimore Bloc and Black EXCELLence.

Members of the Baltimore Uprising Coalition entered the Baltimore City Hall Wednesday during a city council hearing to over whether Interim Police Commissioner Kevin Davis should be appointed permanently to that position. About three dozen people remained on the balcony after his appointment was approved by the council. As of 12:15 AM Thursday, at least 30 coalition members continued occupying the city hall building.

According to the Baltimore Sun:

Protesters at one point disrupted the hearing, chanting “No justice, no peace! If we don’t get it, shut it down!” and “Stop the vote! Stop the vote!”

The council’s appointments committee nonetheless approved his appointment, which will now go before the entire City Council next week.

Protesters remained on a balcony overlooking the hearing room after other attendees were led outside. A police spokesman said late Wednesday that 35 protesters were still inside City Hall, and police were monitoring the situation. About five protesters left City Hall around 12:15 a.m. Although police have not attempted to physically remove the protesters yet, they have prevented them from accessing the bathrooms and not allowed food or water to be brought in to the occupiers in order to force them to leave voluntarily. The power has also been turned off to prevent the protesters from charging their phones, cameras, and other electronic equipment preventing them from maintaining contact with the outside world or documenting what is happening on the inside of the city hall.

The activists involved in the occupation have issued several demands, the primary one being a meeting with Commissioner Davis and Baltimore Mayor Stephanie Rawlings-Blake.

Via Telesurtv.net other demands include:

The activists also have several specific policy demands, including that the commissioner implement stricter rules of engagement for police and that the city allocate US$20 million toward education. A total of 19 demands are laid out in an open letter to the mayor that was posted on Tumblr (also see the letter below).

Some of those demands have been conveyed, via Twitter posts:

Immediate concerns: 1. We need food & water 2. We need to piss & shit 3. We need the power back on #baltimoreuprising #occupycityhall

The irony of denying @BmoreBloc @bccbloc food, water, and electricity; so many communities in Bmore are denied those basic necessities too

The letter, which was posted to Tumbler, below contains statements from the Baltimore Uprising Coalition concerning the reasons behind the occupation and the list of demands to end the occupation voluntarily: