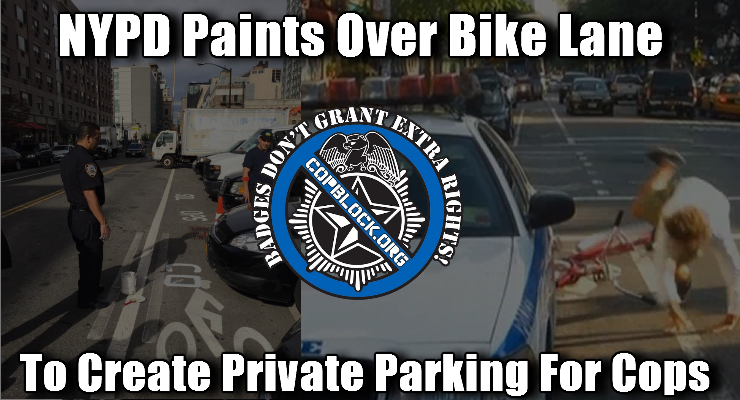 When a cop doesn’t like something, say a law that designates a bike lane in NYC, they simply ignore it by parking in the bike lane.

In the escalating ‘war’ between the NYPD and cyclists, police have stooped to a new low. On October 14, NYPD officers were caught painting over the lawfully designated bike lane. Why? It seems the NYPD officers are either too fat or too lazy to park in legal parking spots.

Though this isn’t your typical article about the violence committed by police, it is a perfect example of ‘cop logic’.

Take Cop Block Journalist Kelly Patterson, for example. He was arrested and charged for vandalism for chalking the sidewalk outside of police station.  Though Kelly used washable chalk, chalk that will disappear when it rains, he was  accused of two counts of “graffiti/defacing property”causing damage between $250-5000 and two counts of “conspiracy.”

More recently, Brian Sumner was arrested for the unthinkable crime of free speech by chalking a police memorial in Fresno. He was charged with vandalism of less than $400. If there is one thing police do not like, is someone who expresses their frustration with police like Brian did, under their 1st Amendment right to free speech.

Another example of the polices’ double standards is the arrest and conviction of Ademo Freeman. Along with several other CopBlocker’s, he was arrested for chalking a police station – again, with non-permanent, washable chalk. Ademo was sentenced to 60 days in jail for freedom of speech.

In closing, I’ll ask just one question: How is it that officers from the NYPD can illegally paint a public road, so they can illegally park in a bike lane, which illegally removes a cyclist’s right to ride in a bike lane, then arrest anyone who dares chalk a sidewalk with a message that’s critical to the police? Maybe someone out there understands cop logic better than I do (JC)?

Update: On a lighter note, the law-breaking NYPD officers were reportedly butthurt after being forced to remove their illegal markings. Unfortunately, the ‘holier-than-thou’ officers are still illegally parking/blocking the bike lane.