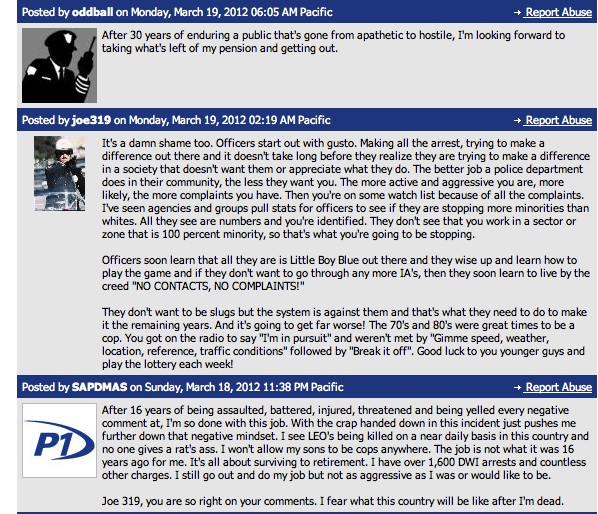 A PoliceOne.com article was the topic of a post submitted to CopBlock.org recently. The author was pointing out comments, in defense of an Orlando officer who slammed a woman to the ground, in the post and while grabbing a few screen shots I noticed another interesting trend. Several officers (only LEO’s are allowed to post to PoliceOne.com, yet the comments are public – for now) commented about quitting their job or getting out soon.

To be honest, I was smiling as I read the comments by LEO’s discussing the troubles of the job, to the point that quitting – or hoping to make retirement – as their only option. No, I was not smiling because these officers seem to be at their limit, trapped between wanting to protect people and government politics. I smiled because officers are starting to get sick of their professions and this is a necessary step. Step two is when they realize who caused the problem, which I’ll discuss below, and three is when they act toward the solution, hence ending the problem.

As you’ll see in the screen shots below, the LEO’s give several reasons as to why they want to leave law enforcement and how it’s changed. Some hold water, yet, point the finger/blame in the wrong direction and others have completely misguided view of the issues plaguing policing today.

Joe319 just realized he’s “trying to make a difference in a society that doesn’t want them or appreciate what they do.” Oh poor Joey, have you ever asked why that is? Why don’t people appreciate an officers job like they did in the past? Do you blame people or the job for this change of view towards LEOs?

Joe goes on to say the “better the police department does in their community, the less they want you.” Really? I think when Joe says better, he means arresting more people (even though most aren’t violent and the victim is commonly the statet), buying more toys and hiring more police buddies. The only time I’ve heard of a police station being shut down was when the cops tried to frame the Mayor, who then – in retaliation – fired and disbanded the whole department. I’m sure most police departments increase their number of arrest, amount of revenue and total budget each year. Sure there are sad Super Trooper type stories about a station or two being shut down but the reality is that police state is booming. After all, Keene, NH is getting a BEARCAT – + $300,000 to the police!

After going on to defend racial profiling Joe gives us some insight into the mentality of a police officer employed by the government. He says, “NO CONTACTS, NO COMPLAINTS!” claiming this to be a LEO creed. I can’t blame Joe or other LEO’s having this moto but the solution is simple. If Joe319 wants to open his eyes… moving on. This earlier statement by Joe talks about the computer age ruining his career. I disagree with Joe, it’s not computers that are hurting your career. It’s the boss, it’s your orders and the LEO’s mindset of “I’m just doing my job” without question. A large number of people don’t like what they pay you to do to them.

The government has you and your co-workers doing things that most would say is morally wrong for an individual to do. For example, telling people what they can or can not put in their bodies is wrong, no one has that right. If I went up to someone and stopped them from buttering some bread (because butter is bad for you) most would say I’m crazy and call the police. Yet, there are tens of thousands drug raids on people’s homes and no one says, “Wait a minute, this is messed up.” If it’s wrong for the individual to do then it’s wrong for the police to do it as a group.

Yes Joe, cameras and computers help hold you accountable but they also protect you – after all, police had the camera first – but don’t blame the camera for telling it how it is, LEO’s are violating people’s rights on a daily basis, but there is a solution and it’s not too late.

Here Smeared1 talks about how dangerous a LEO’s job is and how he can’t wait to hit 25 years, then get the hell out. Claiming to have “defended himself more times than he can count” I can’t help but ask, “Is Smeared1 a DEA, Narc or war on drugs cop?” If so can you really blame people for defending their property? How do they know if you’re a criminal or a ‘righteous’ cops?

Is there a difference between a robber and the police? Both damage your property to gain access to your house. Both seek to take some or all of your property. The only real differences are that if you shoot the robber you’ll most likely be a hero – depending on what state you live in – but if you shoot the cops, 10 more will empty their clips in you. The other difference is one group claims to have a right to do this while the other knows they’re simply stealing from you.

Do you really believe the government – something that is created by people and nothing more than an idea – gave you the power to break into people’s homes in order to keep them safe?

Smeared1 then complains that “our word doesn’t cut it anymore.” HA! I wish that were true. Sure, cops (at times) are held accountable for their job and more so than 20 years ago, but it took huge technological advances to make that happen and even still officers get away with wrongful acts all the time. For every officer that is caught how many (like Atkins) get way?

Then, taking it even further Smeared says, “Innocent until proven guilty does NOT apply to Cops.”

I almost fell out of my chair reading that.

My last court hearing was for using Chalk on a police station and unlike these cops, I was sentenced to the maximum punishment – 1yr in jail and $1248 (I was never offered a plea deal, most likely because they know I won’t take one, nevertakeaplea.org). Yet, four officers can beat up a guy and never face criminal prosecution at all, in fact, not only did the police department clear their own of wrong doing but the Attorney General backed them as well.

Yeah, I think Sapdmas sealed up the dumbest comment ever award with this.

Sapdmas is trying to make you believe that for 16 years they’ve allowed themselves to be “battered, injured, threatened” and yelled at? And ‘this crap’ (the video of an officer throwing a woman to the ground face first) furthers his “negative mindset.” Like he needed help with that.

So I must ask.

Who would tolerate what Sapdmas claims policing to be? Especially if they saw “LEO’s being killed on a near[ly?] daily basis in THIS country and no one gives a rat’s ass.” Which is absolutely false, according to this link, 23 officers (including jailers, park rangers and more) have died in the line of duty this year – leading cause, traffic accidents at 5.

This means Sapdmas is either an absolute liar or the dumbest cop in the country. Working for low wages while being assaulted and fearing death everyday… I mean seriously, just quit ASAP? Go work in a factory buddy, you could get paid the same and not be bullied, as you claim.

The smartest thing stated by Sapdmas is that he’s not encouraging his children to be LEO, thankfully, considering Sapdmas seems to prefer aggression over peaceful persuasion. “I still go out and do my job but not as aggressive as I was or would like to be.” Really? How much more aggressive can police be?

LOL, oddball you do realize that the “apathetic” and/or “hostile” people you speak of are also the ones who pay your salary, provide the department’s funding, that pays for all those cool toys police have. One day those who pay for your salary and benefits might stop, or maybe a large number will. At that time, everything you’ve worked for will be lost, you’ll have no pension because people will refuse to pay you.

Which brings me to my conclusion.

All these officers are either upset with the system, the public’s reaction to the system or a mixture of both. Either way, they also fail to make the connection between their complaints and the reason a solution is so difficult under the circumstances today, the government. I am not a cop hater, I care deeply for all people, and if cops really wanted to do good. The first thing they should do, IMO, is stop working for Uncle Sam.

All of the complaints above, and including those of police accountability activists, would be solved by ending the government’s monopoly on protection.

Joe319 would then be free to start his own protection agency, responding to customer feedback and needs. He would no longer have to worry about lame duck chiefs or anyone else forcing their political agenda into his profession. His business would succeed or fail on his choices alone.

Smeared1 thinks all cops are guilty until proven innocent and feels his record of honorable protection work should speak for itself. I agree, a good reputation will go a long way in business. Maybe teaming up with Joe319 – to offer more protection services – would be ideal for the both of you. Smeared1 stated he doesn’t work without a camera, something I as a potential customer would appreciate, which is a great start for a business offering to protect others.

Maybe Sapdma would join Joe319 and SMeared. Seems he’s skilled in protecting travelers and could head the division of “officers” that are contracted to protect private roads. As I’m sure private business (in this case road owners) would have speed limits, drunk driving restrictions and others rules that would need enforcing. (and every business would need some sort of protection)

I know this sounds similar to what ya’ll do now and it is. The major differences, and there aren’t many, is that you’ll be paid directly by people who either want and need your business to protect their investment. And if you or your business owner decide to start violating people’s rights then they’ll stop paying for your service. Then you and the boss will be out of a job. That’s how you gain accountability, by allowing people the freedom to choose their own form of protection and to withdraw their funding if they so wish.

And to the LEO’s out there who think I’m crazy, that privatization can’t possibly work, fine. You’re free to think what you want. Just remember that your boss, the government, is trillions of dollars in debt. If you don’t believe privatization is the solution, I hope you’re thinking of something because this bubble is about to burst. What happens when your government check is no good?

That’s why I can’t blame LEO’s for losing faith in your job, and I hope more do, the government has really screwed us all here. It’s time we fire them and conduct ourselves via consensual interactions.