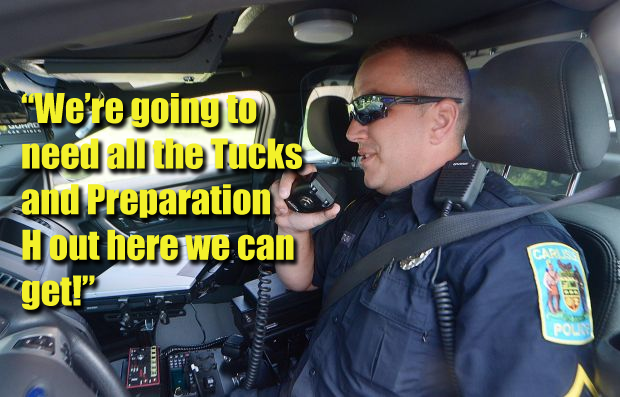 Did you know that October is National Bullying Awareness and Prevention Month? Many police agencies have bullying prevention events and messaging throughout the month, which is odd since they are typically the biggest bullies in the town (yes,it’s The Onion, but with more than a grain of truth). But this year, things were a little different in Fairfax County. This year, residents gave one of the local police unions a lesson about bullying that they are not soon to forget.

It all started Tuesday night when Fairfax Fraternal Order of Police Lodge 77 president, Brad Carruthers, posted this screed on Facebook:

Oh, the unbearable butthurt of being a police officer! Quick! Pass the Preparation H! We’ve seen cases of police officers being all bent out of shape over Black Lives Matters displays previously. Widespread butthurt broke out over a Dunkin Donuts worker (the betrayal!) writing it on a coffee cup. I also recall seeing reports of tender backsides over a person in some reality TV show wearing a BLM t-shirt this past summer. While Carruthers said the sign was “disturbing and disappointing,” “slap in the face ridicule,” and blasted Cox Farms for making police officers “the target for almost everything they do” and being “constantly questioned by the public and the media without the benefit of all the facts,” he stopped short of saying the local family business was supporting the murder of police officers. However, that was a torch that Fairfax FOP’s members and supporters were happy to pick up and run with as they left a flurry of 1 star reviews on the Cox Farms Facebook page.

One person even left a veiled threat about throwing bricks through windows and having the police take their sweet time responding to the call if the owners reported it.

Northern Virginia Cop Block and another accountability-focused organization, SURJ NoVA, shared the posts to our respective social media outlets early Wednesday morning. The response was swift and immense, and this time the community stood by a business under attack and stood up to police bullying.  Hundreds of people took the Fairfax FOP to task for attempting to slander and bully a local business for exercising their freedom of speech and for spreading false info about the meaning of Black Lives Matter.

Below is a sample of the astute commentary submitted to the original Fairfax FOP post and also a Washington Post article; They reveal a public that is absolutely fed up with a police department that protects unfit officers and fights release of information regarding officer-involved shootings tooth and nail. In attempting to sanction Cox Farms for a sign he interpreted as “inflammatory,” Carruthers unwittingly exposed himself and Fairfax FOP members to the same scrutiny and criticism he had hoped to silence. But wait, there’s more! Midway through the morning, someone from Cox Farms left a comment on the Fairfax FOP post:

So the Fairfax FOP initiated boycott of a business over a sign that was actually in a private residence.  Is this the kind of “baseless criticism and judgment” Carruthers had accused Cox Farms of?

In interviews with reporters, Carruthers took turns first toning down his rhetoric by saying police support Black Lives Matter, and then deliberately associating the nonviolent movement with violence against police officers.

“Unfortunately that [phrase] has been hijacked by a small group of anti-police individuals. And now when law enforcement views Black Lives Matter we see – in social media and through protests – the violence that is inflicted on law enforcement.” “That’s propaganda being spread in hopes that it will silence the voices of Black people and to heighten the perception that we are threats to be taken down. We are unarmed protesters fighting against police brutality and if that evokes fear into armed, heavily protected police officers they need to find another line of work. It’s not an attack on individual officers; it’s a movement to highlight the structural oppression Black people face in this country.  When Black men, women and children are dying in the street at the hands of a law enforcement officer every 28 hours, when most of the people incarcerated are there for non violent crimes, when a Black boy can be assaulted for using the ATM and for making gentrifies uncomfortable, how can we not begin the conversation on how to eradicate racial bias in our criminal justice system.”

Even the Fairfax County Police Department felt compelled to publicly distance itself:

Fairfax County Police Chief Edwin C. Roessler Jr. said Carruthers had the right to free speech, but was not speaking on behalf of the department. “I’m a neighbor of Cox Farms,” Roessler said. “That sign does not offend me. The sanctity of human life is paramount in our profession.”

By Wednesday evening, Carruthers could no longer take the heat. He removed his original post on the Fairfax FOP Facebook page (we saved a copy), and put up another one whining that it had been misrepresented. He took the time to again slander “Black Lives Matter” as “inciting violence against law enforcement officers,” but didn’t bother to admit he had been wrong or apologize for the backfired boycott attempt. Being a police officer means never having to say you’re sorry.

Ultimately, it was Cox Farms who had the last word by posting a powerful message to their Facebook page that unequivocally supported the philosophy behind Black Lives Matter, and also their support of law enforcement officers in Fairfax:

“We have always believed that we had a very positive relationship with our local police department. We have contracted FCPD officers to provide security for our festival for over a decade. We have supported their fundraising efforts, donated to their Police Unity tour, employed their children, and offered discounts to officers on our Public Servants Weekends. Neither our family nor our business is anti-cop, and we are absolutely anti-violence, against anyone. For this reason, we were especially surprised that the FOP and so many local officers jumped on the call to boycott our business and make such hateful accusations against us via social media.

Valuing Black lives and respecting the lives and work of police officers are not mutually exclusive. Knowing and respecting as many FCPD officers as we do, we’re confident that many on our local police force know and understand this too; after all, how can they serve and protect all members of our community if they do not believe that Black lives matter? We also know that the threatening comments on the original FOB Facebook post (those referencing throwing a brick through the window of our home, or the ones implying that perhaps the police might not respond to emergency calls for help) do not reflect the values and work ethic of the Fairfax County police officers we know and respect…

… As a family, we know that when you’re on the right side of history, love wins. Right now, it means that some people in our community no longer feel comfortable supporting our business, and we respect that. We realize that some police officers no longer feel welcome at our business, and to them, we extend an invitation to dialogue with us about that, or to just come and play with their families. We’re a really fun and welcoming place, and it looks like a great weekend to play at the Fall Festival!”

I know I will be joining the thousands of other people who will be visiting this fine, proud establishment that is not afraid to stand up to bullying and injustice this fall. If you are in the area, I invite you to do so as well.