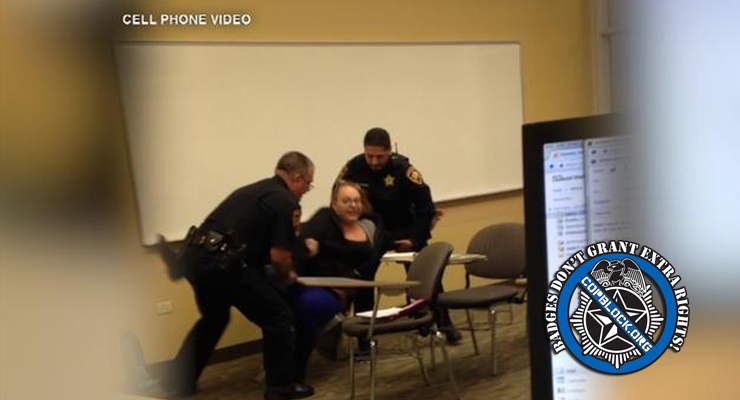 Just when you think that you have seen the end of students being attacked in school by the authority figures there to protect them, we now have yet another lawsuit being filed about a case that surfaced out of a Glen Ellyn, Illinois college.

Jaclyn Pazera of the college of Dupage says she had been outdoors smoking when an officer told her it wasn’t allowed on campus. Pazera took it as a verbal warning and returned to class.
Two officers followed her and said they were arresting her for trespassing.

The video clearly shows Jaclyn the student, being bullied to the point of being on the ground with a knee in her back. When the police approached her there were no negotiations no rationalizations, there was nothing but plain and simple force being used on this young female college student by these two larger men. thank goodness someone had the sense of mind to videotape this encounter, otherwise it could have been so bad for this girl.

The police keep ordering in her to stop resisting. She was clearly never given a chance to even comply. They approached her for the crime of smoking a cigarette. In a world where smoking a cigarette can lead to this type of violence what are we to do? These power hungry Campus cops decided from the very beginning of this situation that it was a chance to flex their power, and they did. They followed this girl whose only crime was smoking a cigarette on campus, back to class and stood over her in an intimidating matter, and ordered her to her feet. This young female college student, understandably shaken, simply said hold on and tried to get the situation to calm down.
These public servants were not going to let any kind of rationality slow them down, as they decided to get physical for no reason, grabbing the girl and trying to rip her out of her seat. As the struggle hits the ground the girl begins begging for them to stop. She pleads with them saying “I will cooperate just please stop”. They chose to respond to her plea with more aggression.

The whole case is similar to what happened in South Carolina a few weeks ago. it shows a scary trend of beatings and violence in schools of all places!

This whole incident happened almost a year ago in December 2014. This is yet another case where somehow the police have figured out a way to silence everyone and cover up video evidence. Why is it that these people with badges can hide even from public scrutiny? How are we ever going to find justice in a system that protects aggressive animals like these?

At least some form of justice is being served here. The reason that we have the video today is because the victim in this case, Jaclyn Pazera, just had all charges related to the case dropped. Not only that, but she has filed a lawsuit against the school and the police employees involved. The lawsuit will maybe help her in a new school, as she was forced to leave Dupage after the incident.

The school is looking into its policies and all officers are still on duty.