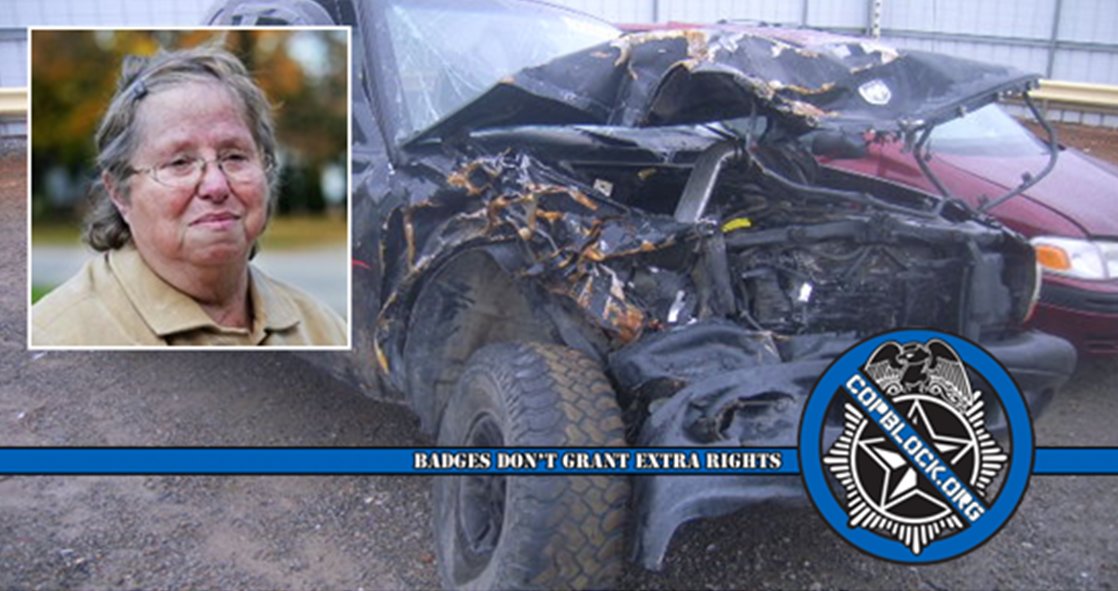 A 75-year-old grandmother was handcuffed and arrested after Milwaukee cops insisted she was trying to cover up for a “mystery man” they said was driving when the woman’s car was hit at an intersection.

Joy McFarlin was going to Potawatomi Casino for bingo and dinner with friends on Tuesday when, eastbound on Wisconsin Ave., she stopped at the traffic light at the intersection at N. 35th St.

When the light turned green, McFarlin says she began making her way through the intersection, but was hit by a car that ran the red light. The collision spun around her late husband’s 20-year-old Dodge Dakota pickup, which ended up on the median.

Because of how the truck was situated, McFarlin was forced to exit through the passenger side. During her escape, a young man showed up to assist her.

McFarlin says the man, who’s name she didn’t catch, helped her across the street to a bus stop shelter where “he stayed with [her] and kept [her] talking because [she] was so shaky.”

After paramedics showed up, McFarlin says the man left before two Milwaukee police officers – one male and one female – approached her in a hateful manner.

As McFarlin was feeling faint and in pain, the paramedics drove her to Aurora Sinai Medical Center, where she says the same two officers followed and continued questioning her aggressively.

“I watch a lot of TV. I know the term. It’s good cop, bad cop. When I thought about it afterward, they both overplayed it,” said McFarlin. “She said things like what are your grandchildren going to think of you. She said there was a video of a black man getting out of the truck, and I was lying. This went on and on. She kept saying I would go to jail for some man.”

McFarlin says there was no black man, but she could not convince the officers that only she had been driving the truck. As a result, the woman says she was handcuffed, led to a patrol car, and taken to the District 3 police station – where she was released from custody after sticking to her story.

“It was as if I had gone into the Twilight Zone,” McFarlin said. “I was so frightened.”

Milwaukee police Sgt. Timothy Gauerke claimed witnesses at the crash scene said McFarlin was lying about being the driver, but as traffic cam video did not capture the incident, she was released without charges.

McFarlin says she thinks witnesses may have erroneously identified the young man that had helped her after the collision as the driver of the truck, but that the officers still reacted unnecessarily.

“That was the wrong way for me to be treated. It should not have happened,” McFarlin said. “I always believed you had to do something wrong to be arrested. I’m too old to be naive, but I really did.”