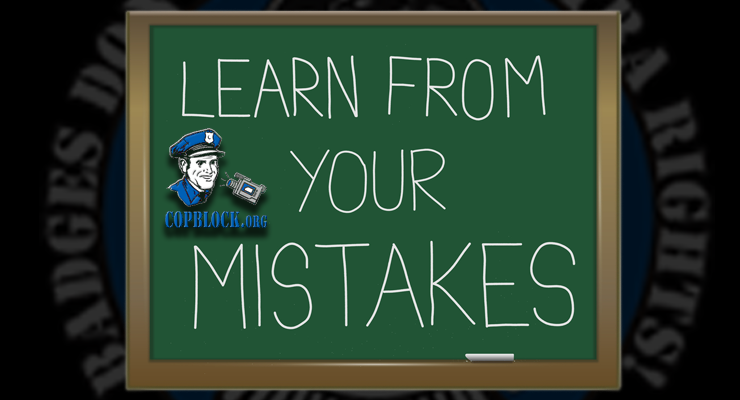 On Friday night I was arrested by the Shawnee, KS police for a “felony warrant” out of Indiana – though they first claimed it was Montana (which I haven’t been to in over 5 years). I figured that the warrant was from Noblesville (IN) and directly related to our chalking of the police department our first night on tour (video we recorded of our police encounter afterwards posted below). Yet, I was shocked to hear that it was a felony because the reason I use chalk is because it doesn’t cause damage. Sure, I’ve been ticketed and even jailed for using children’s chalk in the past (a resisting arrest, for going limp, was part of my sentence, too) but those still aren’t felonies and not extraditable.

Having never faced an extradition before, and being dumbfounded by the felony charge, I requested to be bailed out in order to handle this head on. I also knew that Brian had the same charge but wasn’t arrested with me, so being out of jail wouldn’t leave him with the heavy workload. It’s hard enough to fight your own case but to do both – as fighting any case from in jail is tough – would be a daunting task. I wasn’t aware that the charge was actually a misdemeanor until shortly before being released; that’s also when I was told I would “most likely” see a judge tomorrow. Right after that we were required to lock down because our 45 minute recreational period was up. I went to my cell thinking I guess I’ll be here until I see a judge sometime tomorrow and that I’d call Brian at my next recreational period (4 hours from then) to say such.

VIDEO THAT LED TO MY CAGING:

Then while eating my lunch in my cell the CO came on the speaker and said pack up your stuff. Had I been thinking clearly, which is hard to do when someone opens the door to your cage and says you’re free to go, I would have asked the Sergeant that processed my bond what the charges were exactly and when I’d see a judge next. Knowing the answers now – misdemeanor and the following day – I would have stayed in jail. I now regret the decision I made but will accept it as a lesson learned, so it’s not lost. I hope that others who are reading this don’t find themselves in a similar situation, but if you do here are three things I’ve learned – not only from this case – from being locked up awaiting charges.

I’ve been in a cage far too many times to have let this get to me but I did – plain and simple – and I let the state pull a(nother) fast one on me. Yet, I hope that it can be a lesson for us all here. Know that if you’re going out CopBlocking – or any sort of activism – then you should prepare yourself with these next three tips:

Being jailed can be an overwhelming experience no matter the circumstances, but know your role. Your role was played and ended when you got to jail. At that time you’re going to have to accept that you’ll be there for 3 – 5 days, that people on the outside will do what’s best for you (spreading the word, seeking accountability and your release) and that you should focus on adjusting to (and at times, surviving) jail life. I know from experience that it will be difficult, but trust me, from one activist to another, it’s best this way. The people on the outside can get information from several different people – though it might take days – and they can have many plans formulated and get you many options.

With that being said, yes, I’m free(r) at the moment. I have a court date in Kansas on October 27th but that’s just a hearing to see if Indiana has stopped pouting about chalk (legally, we’ll find out if they have a Governor’s warrant to extradite me). If they haven’t then another hearing will be set and the circus will go on. Brian and I have no intention of ‘running’ from these charges; in fact, we’ll bring them (and our chalk) right back to the police station steps where it all started. “Indiana” (those wearing badges who think they have the right to) just has to come give us a “Bernie Sanders Free” ride back. Until then, remember “Badges Don’t Grant Extra Rights.”

Below are the videos that show our chalking of the Noblesville police department. Was their reaction justified?