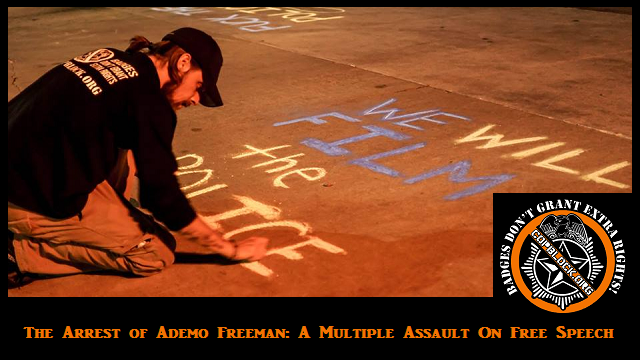 On Friday October 16th, 2015 Ademo Freeman was arrested in the Kansas City, Kansas area on a warrant stemming from a recent event in Indiana. In the video of his arrest the police tell him that the warrant is for felony criminal mischief, although it was later determined that it was only a misdemeanor charge. Questions remain about whether the categorical error of his pending charges at the time of his arrest were a mistake or intentional misinformation. Many questions remain, as the entire thing stinks to highest hell.

The warrant for his arrest was non-extraditable, which means that the Indiana police department that brought the charges had no intention of transporting him back to their jurisdiction if he was arrested outside of it. At the same time, the charges could only be tried in that jurisdiction’s courts. These two items combined mean that the arrest of Ademo in Kansas could not in any way contribute to his prosecution. There was literally no reason to execute this warrant, as it could have no possible legal contribution to the case against him in Indiana. He was jailed for no reason whatsoever.

The warrant from Indiana stems from an incident a few weeks back in which Ademo and fellow CopBlockers chalked the sidewalks of a police station, an action that has been ruled completely legal and protected under the constitutional right to free speech. At the time of the incident, the local be-badged thug-knights were aware of what had happened, gathered information, and presented no indication that they were pressing charges. So when on another stop during the MAC (Mobile Accountabilty for Cops) Tour, he was arrested for an incident that occurred weeks back, it came as a bit of a shock.

The MAC Tour is essentially a travelling activism brigade for bringing awareness to the myriad problems of policing through free speech activities. It is a peaceful enterprise which uses legal and non-violent means to spread the core CopBlock message that “Badges Don’t Grant Extra Rights.” Ademo, Brian, and the many participants along the way are using constitutionally-protected rights to widen the audience of people already becoming increasingly tuned-in to a severe mistrust of police and other authoritarian institutions. So it should come as no surprise that police agencies would take umbrage to this travelling truthsaying and work together to disrupt it wherever they could.

While engaging in a large campaign of free speech activities, Ademo was arrested for a specific action that had happened a few weeks earlier. There is almost no way that the charges against him will stand. In fact, I believe that much was known when the warrant was issued. These charges are not about upholding the law and contributing to the betterment of society. They are about disrupting a massive free speech endeavor by conspiring to falsely accuse him of a crime for an action that was itself a legal free speech act. The police are working together not for the betterment of society, but to target and harass an individual who presents a danger to their unquestioned authority.

Throughout the tour, while engaging communities and LEO’s, the MAC Crew have been asked about their RV when it was not present. This suggests that there is a widespread knowledge of the MAC Tour, as well as its schedule and participants. It seems to me more irrational to suggest that the massive nationwide network of information-sharing police use has not included MAC and Ademo in its missives. Nor does it seem unlikely that further communication and covert planning have accompanied these law enforcement network interactions. In short, it seems likely that the police, like all other individuals or systems, have made plans to thwart the activities of what they see as a danger to their own dominant presence. Unless you have failed biology, history, and psychology epically, you probably understand this.

The arrest of Ademo was little more than a wan attempt to disrupt the activities of the MAC Tour. There was no logical or practical reason that it occurred. It was a falsity based on a falsity, ad infinitum. Which means that Ademo, Brian, and all of the other contributors, participants, and followers are doing something right.

You might force Ademo to alter his timeline, but you will never diminish his determination. Trust me, I know from my own static incursions, and despite that, I love that stubborn motherfucker like a brother. You can attempt to interrupt the MAC Tour and sideline it in every state. In that case he will work harder and smarter. And he will persevere and adapt. You can stall the individual. And you can stall the law and our rights. But you cannot stall the truth. And you certainly cannot stall someone who doesn’t give a fuck about anything you do to him, so long as he knows that what he is doing is truth. And. It. Fucking. Is.

p.s. How much did taxpayers pay to falsely imprison Ademo while violent crimes go unsolved?