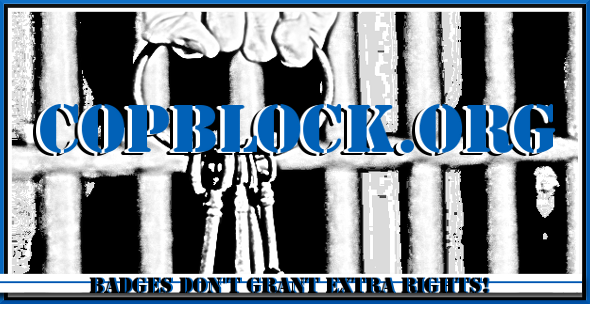 If you are an officer that hands out tickets to other officers, please send me an email. I would love to see the tickets and hear your story. danny@copblock.org.

My Recent Interaction
I was headed out of the store parking lot and saw two KCK police cars pass by. Naturally, being the copblocker that I am, I decided to follow them and see if I could catch them breaking their own laws. Sure enough they both did. As I followed thinking I was recording them I saw one of the officers fail to use his blinker on 3 separate turns and watched the other one make an illegal U turn. Unfortunately I had my phone camera instead of my sony and it in selfie mode. Needless to say I did not capture them breaking the law but rather just caught my pretty face and the passenger side window. Generally when I catch officers breaking their laws I pull over and ask them why they break laws and pass out tickets for the same. These types of contacts go two ways for me. Either an officer will immediately accept or deny responsibility or they just plain ignore me. Ignoring and denying fault will more than likely end with an ear full of my negative unfriendly words instructing you, probably fruitlessly, to obey your own law,. When I approached the officers in the video they just tried to confuse and deny breaking the law. As I was speaking with a couple officers one of them got in their car, pulled around behind me, flipped on his lights, and asked for proof of insurance and ID. Not knowing what I had done I refused. Then he hit me with, “you were using your mobile device while driving”. I responded with “recording you”. Had I known the statute at the time I may have very well spent the night in jail because I would have refused to give them my ID, however I wasn’t fully sure of the statute wording. So when I got home I looked it up and realized I did not break any law at all. Immediately I made this video.

The Judges Ruling
I went to court, pleaded not guilty, and had a trial date set. Upon the trial date three of the four officers showed up to testify against me. The prosecutor pulled me in her office because they were submitting dash cam footage into evidence and were required to show it to me. I watched approximately 10 of the 20 minutes they had and asked the ticket writing officer, who was in the room, and the prosecutor if there was actually anything but the back of my vehicle on the video. Any audio or anything? Nothing? I stopped them and said “sure, submit it if you want.” As we were leaving the office I asked the officer if he agreed and understood I was recording which he answered “yes” to. The judge opened up by asking me if I wanted him to read the statute. My reply, “why yes I would, I would love for you to read the statute to these officers because they do not know their own laws”. After the statute was read the prosecutor asked the officers to describe the contact and what they had seen. Every answer was exactly the same. When the prosecutor got to me I explained exactly what I was doing and where I had begun doing it. She verified with me that I had been recording for quit some time thinking somehow the judge would buy that as being guilty. When it was my turn to question the officers I made it very simple. Was I sending or receiving messages, or was I recording. None could answer the question with certainty. I did bring up the ticketing officers admission and agreement that I was recording when we were in the prosecutor’s office with her as a witness to it, but that was probably irrelevant anyway. The judge looked down at the prosecutor and said “unless you can magically place recording into the text of the statute, not guilty.” She tried to use the words “distracted driving”, but it was to no avail as the judge replied “that’s not in the text of the statute, not guilty”. That was that. Read The Statute Text Here

The officer who made the decision to have me ticketed dropped his head in amazement at the judgement. If he had known his own law he would not have had to drop his head and could have saved myself and the taxpayers a little bit of cash. The officer who had been forced to write the ticket did admit before the judge that he did not use his emergency lights when making the U turn without me having to bring it up.

I have repeatedly asked officers if they know the emergency vehicle laws. Specifically the law that requires they use both audibles and visuals in order to be exempt from certain other laws. When you are pulled over on a road that would otherwise be illegal to park on, the officers are breaking the law. Not only are they breaking the law, but they are causing you to violate the parking ordinances as well. I have asked this question countless times and have only had one officer answer me. Unfortunately he didn’t know the statute, so he pulled the answer from his butt and was wrong. Man how annoying it would be if every time you were pulled over the audibles were constantly running, but hey, it’s the law. I call bullshit on police who think they get to pick and choose what laws they can break and when they feel like breaking them. Most of the time it’s within moments of passing out a fine to you or someone you know. Read The Statute Text Here

Watch These Videos Of Cops Breaking The Law

The Joke Is No Joke At All, It’s A War On The Poor

These victimless crimes are a joke and used purely for revenue generating and fishing expeditions to “further the investigation” and gain access into your vehicle. Typically officers will creatively “ask” questions under guise of a demand,  deceit, lie, and even be friendly. It all comes in the form of a question. The more you answer, the “further the investigation”. Stop answering questions, even to the nice cops. “Nothing to hide” is a terrible reason to answer questions to any cop! See A Lawyer’s perspective. See a Detectives Perspective. In my opinion traffic “violations” are the biggest reasons for “contact” that end in the kidnapping, caging, fining, beating, and death of countless innocent people. It negatively affects the poor. It is a War On The Poor.

Wanna Waste 15 minutes of your time? Well here ya Go!

Yo, Yo, Po, Po, Don’t Enforce Victimless Preemptive Statutes And You Might Earn Some “Good Cop” Points, LoL

I couldn’t tell you how many times I have caught police break their own laws. I personally think these preemptive, victimless crime statutes, laws, and ordinances are not only goofy but harmful to the public’s safety. I would rather not even have to try and hold the conscience of officers accountable for breaking these types of law, but I simply just can’t stand the hypocrisy. Especially when they pass out fines for the same. I would rather they just stop enforcing them altogether. People are capable of making a decision without wheels coming to a complete stop to determine their own safety. If you kill someone because you didn’t stop, well, then you have a victim. You cannot tell me that after a “rolling stop” occurs and no one is killed or there isn’t any property damage that it is worthy for you to get justice against yourself by having someone stop you, take ownership over you, fine yourself $80+, and give it to your government. You cannot tell me that if windows are tinted to a certain darkness and someone somewhere thinks it’s to dark that we should allow ourselves to be fined $120+ and give it to the government as punishment. I know, “if you remove it, there is no fine.” Bull Malarky is his name!!! You are out time. And these days time is very valuable.

Officers, quit enforcing BS preemptive statutes, codes, and ordinances. That might be worthy of gaining some “good cop” points with some. Imagine just solving real crime with victims. Solving murders, catching killers, retrieving property. Don’t get me wrong, I don’t think government should be the employers of “law enforcement” at all. Knowing my “dream world” could never exist due to greed, pride, and collective desire to control everyone, we could at least agree that crime with victims is much different than traffic law. Traffic law itself is more harmful to the public than any of the violations of the traffic laws themselves. It is a war that removes food directly off of your table and we have been trained to think that it is righteous. Quit trying to gain access into vehicles through tag lights, head lights , rolling stops, swerving over the center line a few times when a cops in the rearview, expired tags, no turn signal, etc. You know all the BS ones yourself!

Stop following the order to hand out citations and arresting people for these preemptive victimless statute and “law” violations. You know the truth, it’s BS! It’s more than just doing a job, it’s about having the integrity and character to use those executive positions to make good judgements, right? Ask yourself if this is helping us?  You are hindering us and are another unneeded contributor to the stress of staying afloat most of us are already facing.