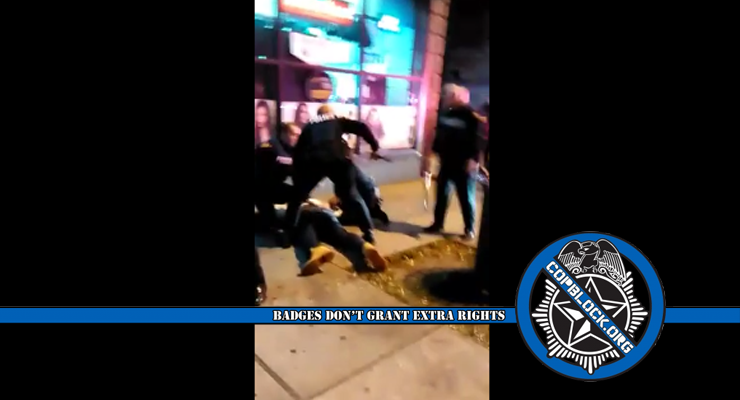 On October 18, 2015 at about 2:30am in Troy NY, A man named Johnny Gill recorded the police. What he recorded is disturbing and violent. In a video he posted to his FaceBook page, you can see multiple Troy PD officers beating people with their night sticks.

“The SLA will not tolerate violent bars that sap city resources,” said SLA Chairman Bradley.  “Unfortunately, as last weekend’s violence wasn’t an isolated incident, the SLA is compelled to take emergency action today to protect the safety of patrons, police officers and residents.”

According to a local news station:

The club was charged with four violations, including assault, failure to supervise, and becoming a focal point for police attention.

Previously, RBC Jazz Club was fined $2,000 for a large fight that occurred on August 18 of this year.

Chief of Police John Tedesco had this to say,

Although its violent footage, the chief says his officers handled it correctly.

This is not the first time Troy PD has pushed to shut down and silence a business. Kokopelli’s had an incident with Troy Police. The owners spoke out about police brutality and this is what they had to say when they closed their doors.

“It is with great sadness that Kokopellis in Troy is closing its doors. 2014 was a difficult year for business within the City of Troy. Kokopellis is NOT closing because the State Liquor Authority is fining them or revoking their license. Kokopellis is NOT closing because the Mayor’s office and city is forcing them to close. Kokopellis is closing as a result of an incident that occurred in January of 2014 in which the Troy Police department brutally… beat a patron for no reason, which caused some up roar from the community. Owners Barry and Joe Glick spoke out against the Troy Police Department for their actions and since that time, they felt they have been targeted and harassed. After being open for a little over 3 years, the owners realize that the emotional support of the community just isn’t enough to sustain business: it takes active presence. There will be some people and businesses that will be pleased with the closing of a fine upscale nightclub; however, the problems that plague the city of Troy are not going to go away because Kokopellis is closed. Businesses in Troy should be working with each other to make the City a better place and that is just not the case. Kokopellis would like to thank all those who continue to support us throughout our existence, and wish the City of Troy, businesses and community… a healthy and prosperous 2015.”

The police are way to quick to escalate a situation. And if anyone records them or a business speaks out about what they are doing they will aggressively go after them as well.

If you feel the police acted inappropriately their contact info is here.