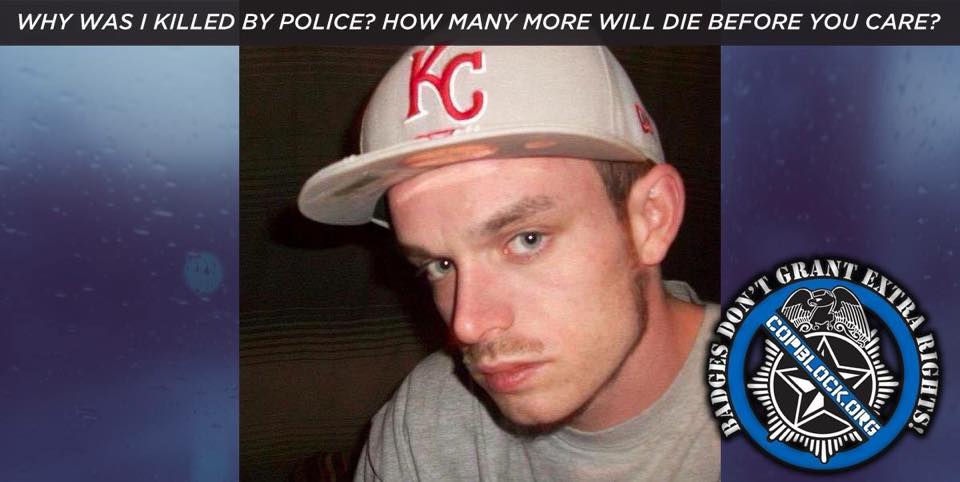 The fatal shooting of Ryan Bolinger by DesMoines, Iowa officer Vanessa Miller has been deemed justified. An internal investigation has concluded which states that Miller acted reasonably when she fatally shot Bolinger, believing her life was in danger when Ryan ‘walked purposefully’ towards her car.

[Read more about the death of Ryan Bolinger and the CopBlock-sponsored protest that followed in its wake.]

The scumbag murder apologist then continues with his heartless, idiotic and immoral rant:

“You have a suspect who has acted erratically and makes an aggressive move toward the officer’s car. The squad car isn’t a magic shield. If the suspect had had a gun, he could have shot her right through the window. Sometimes it is hard for the public to understand what fearing for your life means to a police officer. This isn’t your 4-year-old nephew jumping out from the closet and scaring you. This is a person you don’t know who has been acting erratically and has made a sudden move to your vehicle. So much of what we do as officers on the street has to do with time and spacing. With the distance [of 20 feet], you are better able to assess the threat. That distance did not exist in this case. Some people say she should have thrown the car in reverse. OK, if we’re speculating, let’s say she does that and (Bolinger) has a gun and fires right through the window and shoots her in the head. Or, he falls down under the car, she drives over him. You can Monday-morning quarterback this to death. But the bottom line is none of us were there in that moment at the time. She had a second to decide.”

In his final comment Wingert shows the trademark sociopathic disregard police have come to display for citizens lives by suggesting that the murderer is somehow also a victim of her own crime.

“A lot has been lost on both sides. Parents have lost their son. Children have lost their parents. And there are a lifetime of emotions and memories that can’t be erased. It’s a truly tragic incident.”

Here are a few facts for you.

I don’t give a fuck how Miller ‘felt’. Her emotional state, damaged as it may be judging by her career choice, doesn’t have a single fucking thing to do with anything. You cannot kill people because you have a bad vibe. That is irrational, immoral and against the law. Whatever faulty subjective state Miller was in, there were no objective clues as to any real danger to her. She based her decision to kill a fellow human being entirely on a delusional paranoid state in which she became convinced that locomotion with volition was a credible threat to her life, despite the fact that no rational person could ever make a case that there was a real demonstrable danger present.

Even worse, she got away with it. Absolutely and completely got away with it. One would think that, given her frail emotional state and inability to make rational decisions, she would at least have been charged with manslaughter, or hell, even deemed unfit for duty. Yet the decision by a ‘special’ (rigged) grand jury as well as the results of an internal investigation find not only that she was not guilty of criminal wrong-doing, but any wrong-doing whatsoever. The State of Iowa, City of DesMoines and the DMPD all agree that her actions were not only justifiable but reasonable. If killing someone who gives you the heebie jeebies when they walk towards you is considered reasonable by these agencies, then I cannot imagine how much lower their standards for officer conduct will continue to fall in the future, if that is even possible.

The Bolinger family will still be filing a case against Miller and the DMPD in hopes of getting some justice from a jury of Ryan’s peers, even though the system which supposedly exists to serve and protect people just like Ryan has shown that it has no mercy or regard for individual citizen lives. Since they refuse to address the situation rationally I will address all of the involved parties here.

Special Grand Jury: You are not part of the justice system. You are part of the states apparatus of covering up its own crimes by redirecting them into hidden meeting rooms where the state and it’s agents are always right. You are a fucking joke.

Internal Investigators: You are not investigators. You are a stop-gap measure against real investigations taking place. You are an excuse to let tensions cool so that you can inevitably clear your own department of its own crimes without ever presenting any valid evidence and instead relying on fearmonger-based opinion. You are also a fucking joke.

DMPD: Congratulations. Because not one of you stepped forward to do your job and enforce the law and let your colleague get away with murder, you are all complicit. You may be a nice person who would give their life savings to a homeless person, but despite that you are also a knowing accessory to murder who did not use your power to bring justice. You are not just a joke, but a tumor in the growing body of authoritarian evil that is rapidly swallowing up the last vestiges of reason, freedom and liberty in this country. You are the slaves who use use the whips on the other slaves on the masters behalf and you still sleep through the night. You disgust me.

Chief Dana Wingert: If there is a hell, there will be a special place there for you. Not only are you complicit in covering up the crime of one of your subordinates, but then you have the gall to speak in such nonsensical and dismissive tones. Your officer killed a person and you kick the family while they are down with your absoludicrous statements. I cannot fathom the sort of psychopathic state your mind must exist in that you can so easily do such things. In the realm of humanity where most of us exist, you are no longer welcome. You are a monster and I hope you can find some vestige of salvation before you damn us all alongside you.

Officer Vanessa Miller: You are a murderer. No matter what any special grand jury or internal investigation or your fellow officers or anyone else says, you are a murderer. Because of you a young man is dead, wrestled from his family far too young, and your only excuse is that you got scared by footsteps. No matter what anyone tells you you know deep inside that what you did is wrong. You know your rash behavior was immoral and illegal. You may have escaped consequences from outside, but in your head you will always know what you did and what you are. If that bothers you anywhere near as much as it should, there may be some hope for your soul yet. Murderer.

I deeply regret that my own meager contributions were not able to help bring justice in the death of Ryan Bolinger. I will forever remember him. My heart goes out to all who knew and loved him. May he rest in peace and may those he left behind also find their own forgiveness, peace and hope for a future where deaths like Ryan’s are not only ignored, but not allowed in the first place. May his children not inherit the same world that killed their father then shrugged it off as a reasonable response to some authoritarians wonky feelings.