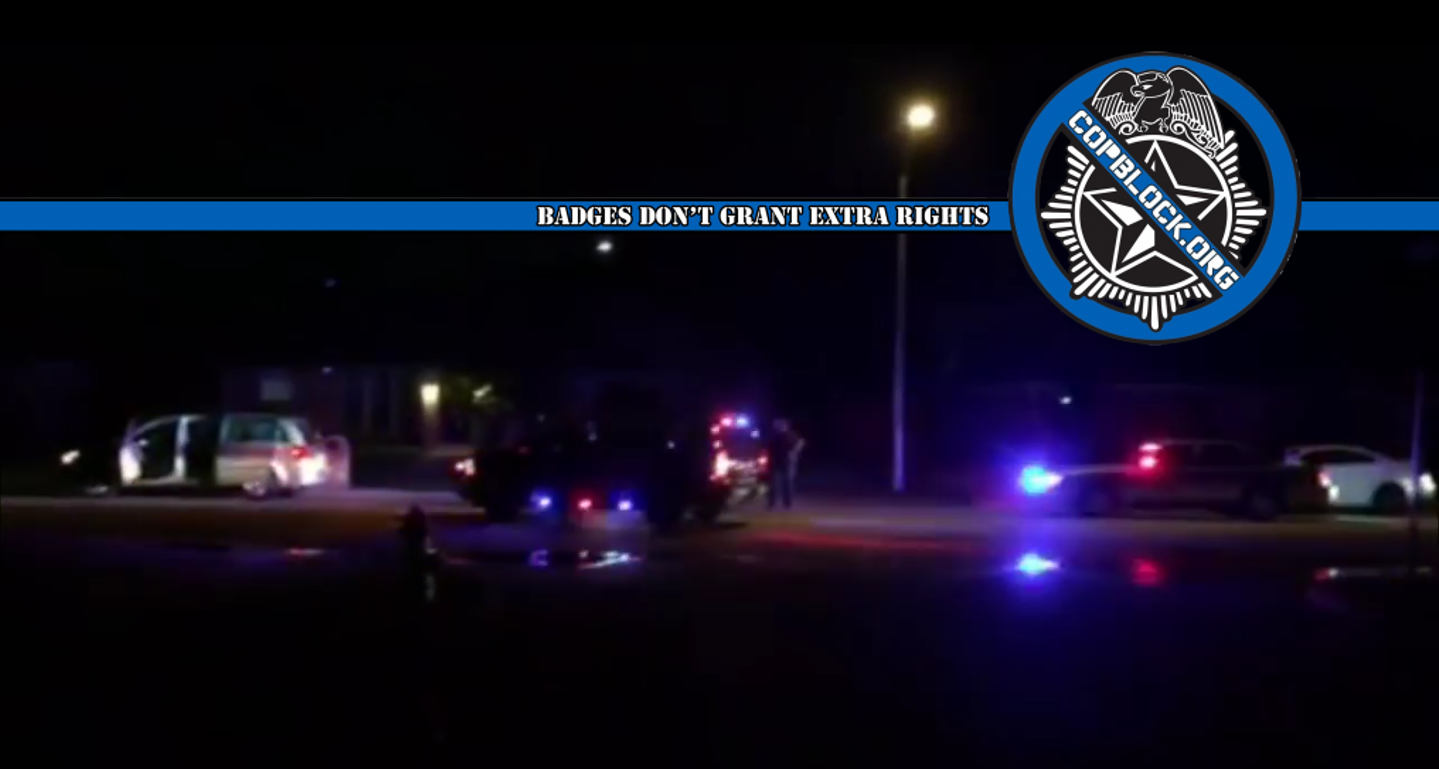 This post and the video below were received via an anonymous submission at the CopBlock.org Submissions Page. Along with the submission the writer stated:

I will be posting more on this subject when I get my phone back (assuming they didn’t kill it), as well as the police dashcam video (assuming they don’t turn up missing).

Thanks for all you guys do!

*Note: Under Texas law (TX Trans. Code 521.025(a)), you are actually required to display a driver’s license upon demand (only) when driving, without any other justification for detainment. However, that doesn’t change the fact that this stop and especially the subsequent arrest was pretty clearly a case of a police officer harassing and retaliating against someone for some arbitrary reason. We started watching our police department after a change in Chief resulted in questionable policies. However, on this night we were just concerned citizens.

As I was leaving, Officer Mershon shined his flashlight in my eyes, blinding me while driving. Driving on, I yelled to him that he didn’t need to do that while I was driving. He got in his car and pursued me, and lit me up after I pulled over about a block from my home. I then turned on the camera on my phone.

He immediately asked for my ID, to which I asked what crime I committed. He said I was “suspicious”. I responded that arbitrary suspicion is NOT justification for requiring ID. After some back and forth, and him trying to come up with other reasons, we reached an impasse.

He arrested me for “failure to present drivers license” claiming that Texas allows him to ID me for anything he wants when driving a car. Not true. I have to commit a traffic offense, and he pulled me over for arbitrary “suspicion”.*(See note above.)

This was nothing more than an another example of cops using their badge as a way to exact revenge on someone who didn’t bow to his uniform. Failure to present drivers license is a citation offense, but he chose to turn the screws and arrest me, impound my car (even though my adult son was there & I live a block from the scene), he didn’t read me my Miranda rights, he confiscated my phone because I exercised my rights to film the stop, and failed to help accommodate me in any way with my disability even though I was suffering a great deal.

I can have this charge dismissed by showing I had a valid ID at the time of stop (which they saw after they took my wallet), and pay a $10 dismissal fee. However, that doesn’t help with the time, pain, cost of impound, cost of loss of phone and information, and especially, the cost of having my rights violated. All because a cop couldn’t handle a citizen that wouldn’t allow him to violate his rights. The thing he swore to uphold and protect.

In the city of Carrollton, Texas, it’s the police department’s world. The citizens are just allowed to live in it……assuming they bow to their badge when demanded.