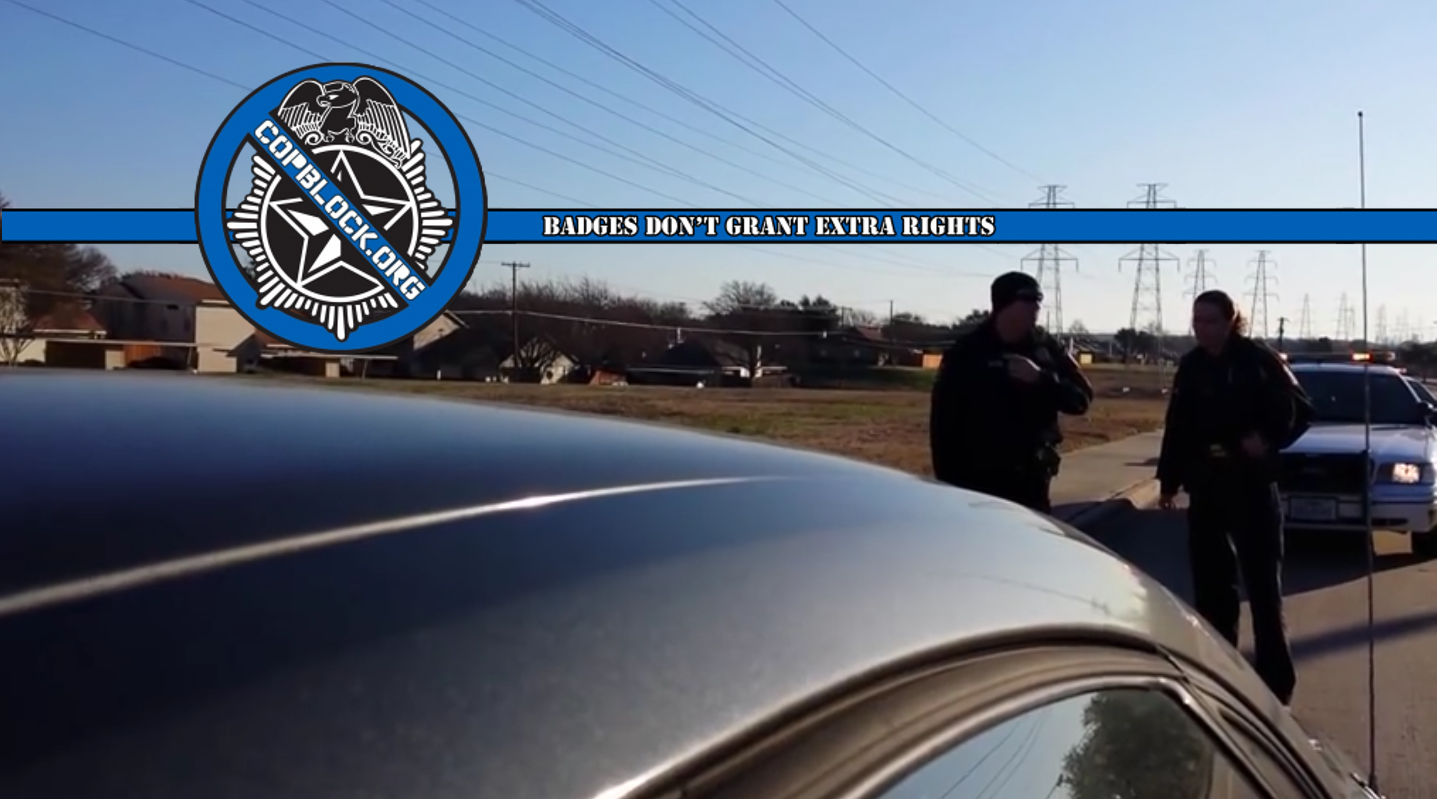 This post and the video below were received via an anonymous submission at the CopBlock.org Submissions Page.

We went to the Carrollton, TX police station to get a few minutes of b-roll footage to start our YouTube channel. We expected that we would be there for just a few minutes, and be on our way. We were on a public street, and in our personal, identifiable vehicle, so its clear we weren’t trying to be stealthy. Also, we had informed the department that we would be filming them regularly, so it shouldn’t have been a surprise.

After just a few minutes, multiple officers loaded up their vehicles to drive across the street and light me up as if I was committing a crime. This was my very first interaction with a cop for anything other than a citation in my life, so I wasn’t as fine tuned as I would have liked. Officers surrounded my vehicle, and two officers started knocking on my drivers side and passenger windows. I opened my window, and the first officer asked what I was doing. I asked if I was doing something wrong, and when she replied no, I refused to respond letting them know I wouldn’t be answering. She went to the back of my car where her sergeant was already in the process of running information on my car, and getting information about me specifically. It was clear he was trying to get something on me so that he could control the situation.

Upon finding no legal reason to control me, he came to my window to ask what we were doing. I remained silent as I had said I would. He asked again, and I remained silent. That’s when the problems really started.

Sergeant Nault then proceeded to look in my car, and asked if my parking brake was set. Now, I’m setting in a long line of employee cars parked along the street, so this was a clear tactic. When he used my parking brake as an excuse to demand my ID, I couldn’t remain silent because he was now using threatening actions. We went back and forth with this, until he finally reached for my door handle under the guise of arrest for not showing my ID. I didn’t take the bait, because a parking brake is not an identifying infraction, and he had no legal reason to demand it. My head blew up because I couldn’t believe he was crossing that corrupt line, and told him he was going to have to arrest me He backed off thinking no one would risk going to jail for a parking brake violation, but I continued to call him on his actions. He finally decided it was best to walk away, but not before putting all my information in the system, and placing a BOLO (be on the look out) on me and my car. Don’t forget, I did absolutely nothing illegal, informed them we would be filming them, and wasn’t trying to hide in any way.

Being an old Texan, I don’t do the “calm citizen” thing very well when someone is trying to screw me over. I treat people the way they treat me. While this officer may appear “polite” on the surface, the fact is, he was trying very hard to violate my rights. Why? Because I was filming a building. If these officers had walked the 30 yards to cross the street instead of driving over, and approaching me like I was a criminal, this video wouldn’t exist. Instead, they chose to approach with intimidation, and surround me. Then to use such seedy tactics to try to circumvent my right to remain silent and not identify myself was the last straw. “Polite” is more than tone of voice. While he didn’t TALK with disrespect, every action he took was disrespectful.