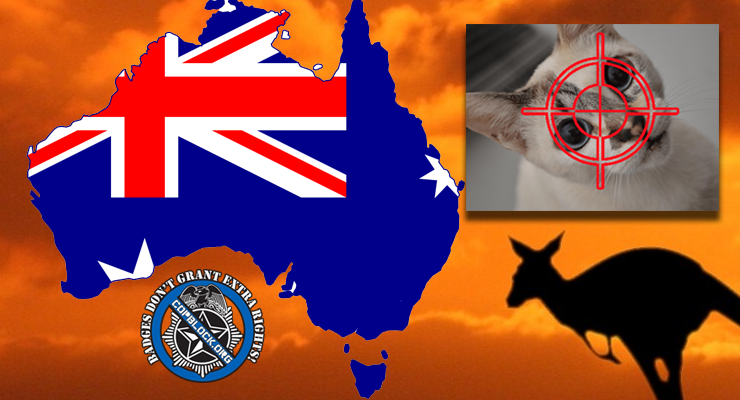 Threatened with the looming extinction of many of its native species, Australia has come up with a plan that is as bold as it is brutal – annihilating feral cats within the next 4 years. The Australian Environment Minister announced, “By 2020, I want to see 2 million feral cats culled, five new islands and 10 new mainland ‘safe havens’ free of feral cats, and control measures applied across 10 million hectares.”

What is the reason for such drastic actions? Cats are estimated to kill 75 million native animals in Australia each day, and nearly 2,000 of the continent’s native species are hovering on the brink of extinction.

To meet their ambitious goal, our Australian friends will need to slaughter 1,305 cats each day between today and December 31, 2019. Obviously, they’re going to need assistance. Thankfully America’s police officers are just the ones to assist with this bloody work. While many workers might balk at the prospect of killing animals seen as loving household companions by many, our cops have a proven track record of serving as unflinching executioners of domestic animals. They could be counted on to easily exceed Australia’s cat culling goals.

Their service to the Australian public would also afford these officers the chance to hone their marksmanship through constant practice, rather than the one to two times some of them go to the range to qualify with their service weapons each year. How quickly the 50% shooting accuracy demonstrated by the average U.S. police officer (which drops to 9% when 3 or more officers are firing in the same incident) would climb as they took down hundreds of fleet-footed felines in the Outback each day!

In addition, the American officers would be able to provide one-on-one communications coaching to their Australian colleagues. American police officers are experts in explaining how unpopular shootings are merely the result of officers following established policy and/or just doing their job.

Lastly, sending US police officers to assist with the eradication of Australia’s feral cat problem would harken back to the country’s noble heritage of importing known criminals to the land down under. Indeed, our officers would be there in 2018 to help celebrate the 250th anniversary of the first convict ships landing in Australia on January 20, 1788.