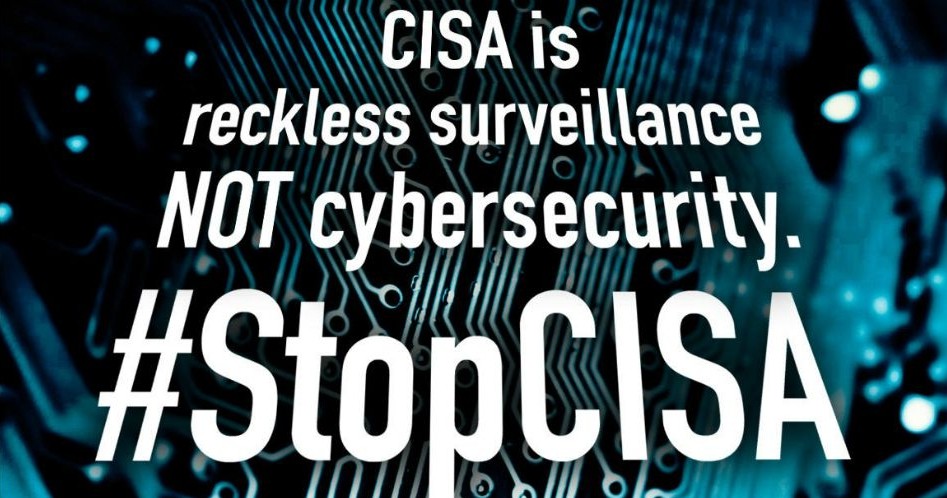 The future of internet freedom hangs in the balance as the Senate is poised to vote on the Cyber-Security Information Sharing Act (CISA).

The bill would give the feds unprecedented and sweeping powers to access and share your personal information in a draconian move that sycophants and government propagandists are attempting to sell to the American people under the auspices of “cyber-security.”

Supporters of the surveillance state are pulling out all the stops and have brought forth multiple bills in the U.S. Congress – including the thrice failed CISPA – in an attempt to consolidate a centralized apparatus that would give tech-companies legal immunity to share a broad range of information about their users with the Dept. of Homeland Security.

CISA would allow DHS to share that information with a myriad of federal agencies including the NSA, Dept. of Defense, FBI, Dept. of Commerce, FCC, Dept. of the Treasury, and others in real time. In some cases, the information could even wind up in the hands of foreign militaries.

This type of sophistry is easily exposed however. CISA would have done nothing to stop the breaches as they were admittedly caused by unencrypted files, poor computer architecture, out of date servers, and employees or contractors clicking on malware links.

Top tech companies like Apple, Reddit, Twitter, Yelp, Dropbox, and Google – along with trade groups like the Computer and Communications Industry Association (CCIA) and the Business Software Alliance (BAS) – have voiced opposition to the bill.

This is not surprising since losing customers concerned about their privacy would decimate those companies’ bottom line. In the wake of the Snowden leaks in 2013, the industry suffered losses not only of trust, but billions of dollars in revenue, some estimates say.

“We don’t support the current CISA proposal,” Apple said in a recent statement. “The trust of our customers means everything to us and we don’t believe security should come at the expense of their privacy.”

In response to industry and public pressure, Sen. Feinstein published a press release earlier this week titled “Debunking Myths about Cybersecurity Information Sharing Act” – which called it “100% false” to believe CISA is a surveillance bill. It’s important to note however, that even DHS disagrees.

In a seven-page July memo, the agency argued that the bill “could sweep away important privacy protections, particularly the provisions in the Stored Communications Act limiting the disclosure of the content of electronic communications to the government by certain providers.”

Additionally, DHS has said it doesn’t even want the power it would be granted under CISA and has chastised the practicality and efficiency of the measure – which by the way, was drafted by politicians and lawyers – not cybersecurity experts, who maintain the bill would basically be useless at preventing online attacks.

“In the event of a cyberincident of some kind, do you really want some centralized entity [like DHS] being the router for everybody?” head of DHS science-and-technology cybersecurity division, Doug Maughan asked at a recent Passcode event.

“Isn’t there a better way for us to share information in a different fashion instead of one organization receiv[ing] it all and then try[ing] to farm it out to everybody else?” Maughan said. “It would seem to me, [that] in a global community, we ought to come [up] with some more technically smart mechanisms for information sharing than a centralized hub.”

You might imagine that with such opposition to CISA, voting for its passage would be political suicide. One finds however, that a surprisingly high number of Senators and Congressional Representatives are supporting the bill. You can find out who is and who is standing against it in your state HERE.

Fight for the future of the internet and put pressure on your elected officials by demanding they preserve online freedom. A protest has been scheduled in Washington D.C. for Thursday at 6:30pm ET for those who want to show they will not take CISA lying down.

If you are in the area, it is superlative that you attend. The event will be held and the corner of 1st St. NE and East Capitol St.. You can RSVP and get further details on Facebook.

Update: CISA has moved forward in the Senate via an overwhelming 83 to 14 vote. The legislation will now go to the House where lawmakers will attempt to reconcile different versions of the bill. We must not let that happen!