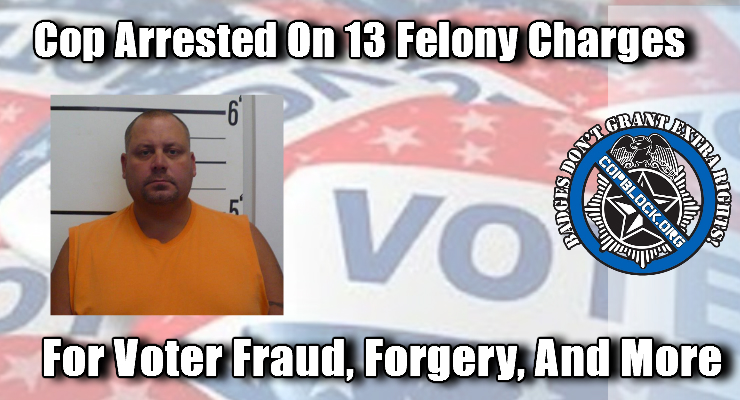 Indiana – A Rising Sun police officer is in custody after being booked on an arrested warrant containing 13 felony charges.

Officer Lowell Ross Colen, 42, is accused of using his official position as a police officer to influence individuals to vote in the 2015 Ohio County primary election.

According to investigators, Officer Colen filled out absentee applications (and ballots), for citizens that were not eligible to vote.

In addition, Officer Colen forged signatures on ballots and absentee applications and turned them into the Ohio County Clerk’s Office. Investigators say that he was wearing his police uniform while committing those felonies. Officer Colen’s charges include official misconduct, ‘ghost employment’, forgery, and voter fraud.

Below is the official ISP Press Release:

In June of this year, Indiana State Police Detectives initiated an investigation into Colen after being made aware of possible criminal activity that took place surrounding the 2015 primary election that took place in Ohio County.  During the investigation, it was determined that Colen allegedly influenced individuals to vote in the Ohio County primary elections. While doing so, he allegedly filled out absentee applications and ballots for individuals who were not eligible to vote in Ohio County.  Colen allegedly forged signatures on some of the applications and ballots and submitted them to the Ohio County Clerk’s Office.  It was also determined that Colen was allegedly in a police uniform and on duty in his official capacity as a Rising Sun Police Officer when some of this activity took place.

110
SHARES
FacebookTwitterGoogleRedditTumblr
DiggLinkedinStumbleuponMailPrint
You Can Support Cop Block by shoppping on Amazon using the banner below:
BANNERS ARE CLICKABLE