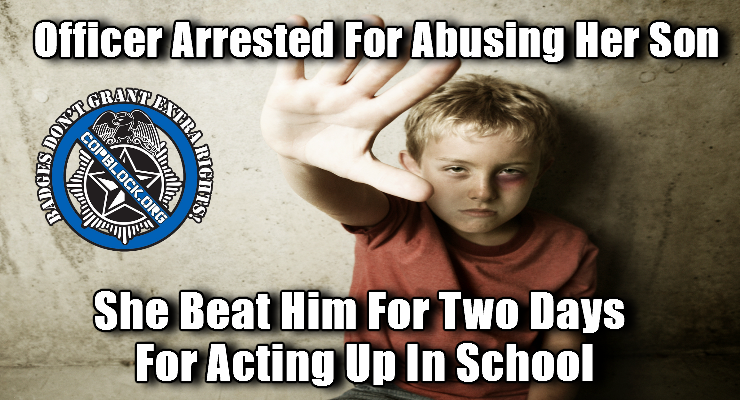 The latest incident of police abusing a loved-one comes out of Jacksonville, Florida. Officer Erica Nicole McRae, a 12 year veteran of the Jacksonville Sheriff’s Office, was arrested for felony charges of abusing her son because he ‘acted up at school’.

Officer McRae beat her child with a plastic clothes hanger so hard, it left bruising in the shaping of the hanger.  Eventually, the hanger broke and the cruel officer simply got another hanger and continued the beating. According to her son, the beatings continued for two days.

The child was injured and scared, and therefore reported the beating to school administrators, who then contacted the police and the Department of Children and Families (DCF). When the young child was examined, the bruising on his arms and legs corresponded to that of a plastic clothes hanger.

At the Jacksonville Sheriffs Office, when a cop is arrested for felony charges, they are NOT fired. Instead, they are given the option of resigning or taking an unpaid leave of absence. The alleged child beating officer, Officer Erica Nicole McRae, has chosen to take unpaid leave. Her child is now living safely away from her, with another relative.

As I have previously reported numerous times, you are up to four times more likely to suffer domestic violence at the hands of a police officer – If you are married or dating one, please seek help. If you are the child of an officer and you are suffering abuse, please seek help immediately.

2.3k
SHARES
FacebookTwitterGoogleRedditTumblr
DiggLinkedinStumbleuponMailPrint
You Can Support Cop Block by shoppping on Amazon using the banner below:
BANNERS ARE CLICKABLE