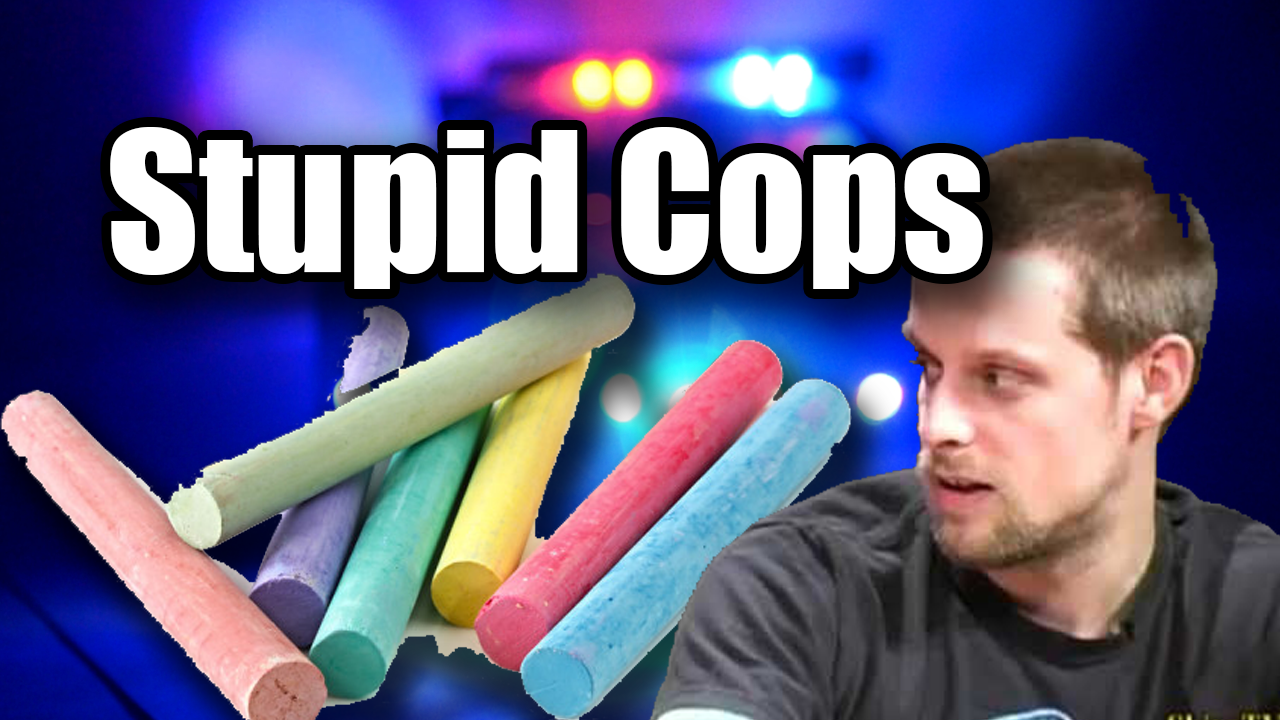 This week several prominent CopBlockers were arrested for peaceful activism. CopBlock founder Ademo Freeman and compadre Brian Sumner were charged with FELONIES for using chalk outside of a law enforcer headquarters. Their charges were later lowered to misdemeanors for alleged “criminal mischief.” Isn’t it convenient that if law enforcers don’t like your message (for example #BlueLivesMurder), they can just kidnap you, put you in a cage, demand money to release you, and claim that your so-called First Amendment “protected” activity is a crime?

“Land of the Free? Whoever told you that is your enemy.”

As if that weren’t enough for an eventful week, three more CopBlockers were kidnapped and caged by law enforcers for more so-called First Amendment “protected” activity: recording on-duty police employees in public. Apparently the people calling themselves the “PA State Police” want to learn the hard way that their badges do not grant them extra rights. They are called “public employees” and not “secret employees” for a reason. In the case of these PA CopBlockers, all video and equipment capturing the arrests were stolen and are being held by those participating in official misconduct. The CopBlockers were wrongfully caged, and now they are wrongfully being denied their property. Boy, isn’t it great that we have these wonderful law enforcers to uphold the law and protect us from extortion, kidnapping, and theft? Oh, wait.

We were joined this week by the entire PA CopBlocking crew. One of them, Scott, has his own YouTube channel called “The Oath Accountability Project.” If your blood pressure is too low, or if you’re just a masochist, be sure to subscribe to him for more videos of law enforcers breaking the oaths they supposedly swore to uphold.

In this episode, we also cover the story of Cindy Hahn, the California woman who was stopped for not wearing a seatbelt and then beaten to a pulp by police on the side of the road while her children watched helplessly from the nearby car. Good thing law enforcers were there to professionally throw their fists on her face “teach” her to wear her seatbelt — otherwise she might have hurt herself! The violence was caught on video by a neighbor who screamed in terror as she watched the local protection racket inflict permanent memory loss and brain trauma on the 40-year-old mother of two.

Finally, some good news: Carl Force, one of the agents who tried to extort the creator of the Silk Road online marketplace, has been sentenced to 78 months in jail. One may wonder whether this punishment is any kind of serious deterrent to official misconduct, or perhaps does this slap on the wrist indicate that the entire “justice” system is comprised of criminals?