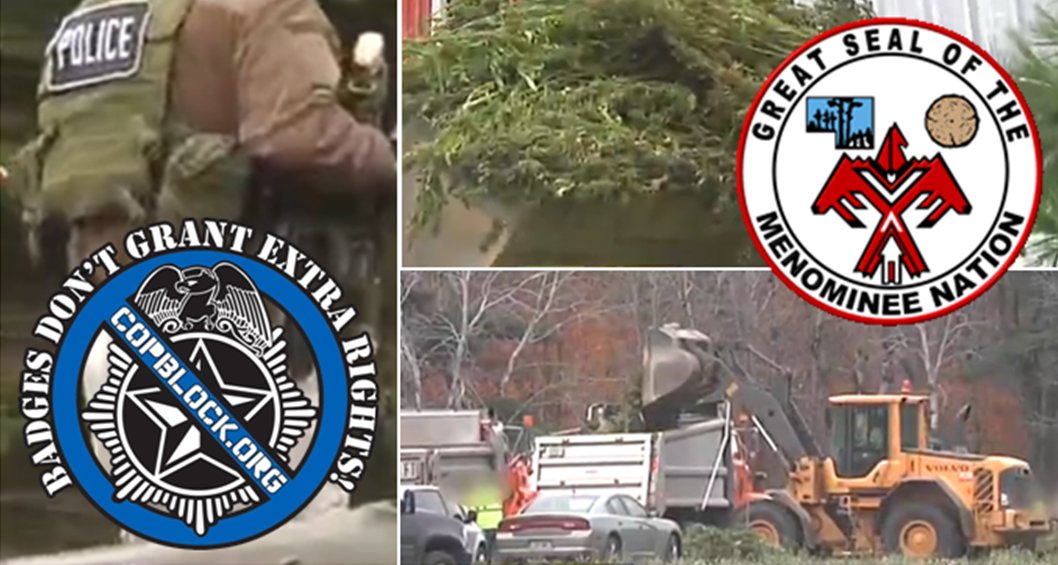 Accompanied by state and local police, undercover and camo-clad federal agents with the FBI and DEA descended on the tribal lands of the Menominee Nation in Wisconsin on Friday, to destroy and confiscate what tribal officials are calling “legal” industrial hemp crops.

Adorned in tactical gear and armed with AR-15s, the drug warriors focused their efforts along County Road M – west of Suring in Menominee County – and utilized front-end loaders and dump trucks to seize over 30,000 plants.

According to the DEA, it was serving a search warrant granted by a federal judge in Green Bay to raid a home, outbuilding, and about 20 acres of tribal land in the County.

No arrests were made but the agency said it was acting off information gleamed from an investigation that suggested people other than Menominee Tribe members were planting and tending to plants in the area.

The seizure flies in the face of a Department of Justice claim made last year that they would no longer go after American Indian tribes growing marijuana on sovereign lands – and even though the Menominee Tribe approved measures to legalize marijuana for recreational and medicinal purposes in August – the operation confirms that federal drug warriors aren’t going anywhere.

Tribal Chairman Gary Besaw said the heavy handed agents “improperly and unnecessarily” entered sovereign lands and destroyed their industrial hemp crop despite the tribe legalizing the cultivation and study of “low THC, non-psychotropic” industrial hemp under an agreement with the College of the Menominee Nation back in May.

In a statement, Besaw said growing the crop “was intended to comply with Congress’s actions in [the] 2014 Farm Bill which recognized a distinction between marijuana and industrial hemp that created an exception to the Controlled Substance Act to allow for growth, cultivation and the study of industrial hemp in certain circumstances.”

He said that the tribes production of hemp was in accordance with the bill.

Marijuana and hemp are both types of cannabis, but marijuana has much higher levels of THC – which gives it its psychoactive effects. Hemp has almost negligible levels of THC and is cultivated for literally 10s of thousands of uses ranging from health products and plastics to paper, clothing, and fuel.

“I am deeply disappointed that the Obama administration has made the decision to utilize the full force of the DEA to raid our Tribe,” Besaw said. “We were attempting to grow industrial hemp for research purposes in accordance with the farm bill.”

Besaw maintains that the Tribe “offered to take any differences in the interpretation of the farm bill to federal court,” and even offered to “destroy certain strains of the industrial hemp crop that [the feds] had identified as problematic,” but said the “offers by the Tribe were rejected in favor of the aggressive unilateral action.”

“Instead, the Obama administration sent agents to destroy our crop while allowing recreational marijuana in Colorado,” Besaw said. “I just wish the President would explain to tribes why we can’t grow industrial hemp like the states, and even more importantly, why we d[id]’t deserve an opportunity to make our argument to a federal judge rather than having our community raided by the DEA?”

Besaw says the Tribe will now sue the federal government over the raid and destruction of the crops.