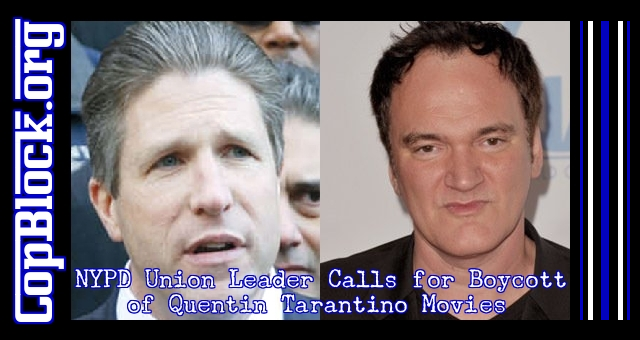 Patrick Lynch, President of the Patrolman’s Benevolent Association and total shit hat, has pleaded with New Yorkers to boycott the films of director Quentin Tarantino. This comes after recent remarks by the cinema mogul suggesting that cops are murderers. Because if there is one thing that Lynch cannot tolerate, it is the truth.

According to NY Daily News:

“It’s no surprise that someone who makes a living glorifying crime and violence is a cop-hater, too,” PBA president Patrick Lynch said Sunday in a statement Sunday.

“I’m a human being with a conscience,” [Tarantino] said according to the Associated Press. “And if you believe there’s murder going on then you need to rise up and stand up against it. I’m here to say I’m on the side of the murdered.”

The remarks enraged Lynch, who noted officers “aren’t living in one of his depraved big screen fantasies.”

Cops are “risking and sometimes sacrificing their lives to protect communities from real crime and mayhem,” the union leader said. He called on all New Yorkers to “send a message to this purveyor of degeneracy” that he should not come to New York to “peddle his slanderous “Cop Fiction.”

Personally, I am not a very big fan of Tarantino. His films are mindless fodder for teenage boys who use the term ‘badass’ way too much. It is masturbatory violence entwined with retro pop culture that fails to intellectually engage or stimulate viewers. And ironically it is chock full of the same kind of plastic machismo demonstrated by cops. The shoot ’em up cowboy crap that fills his movies is exactly the kind of culture police have developed in real life. If anything I would think that these films would be worshiped by police as instruction manuals for being hyperbolized caricatures of bravery and strength. Which is probably the real reason that Lynch, who is just like a mobster out of a Tarantino film, got his feelings hurt when the director hurt his feelings with cop-critical remarks.

Patrick Lynch has a long history of spewing irrational, immoral and inhumane diatribes in the press; and of being a total pouch of peckers. He looks, sounds and acts like you would expect a mafia boss, which is essentially what he is. He makes heavy-handed attempts to appeal to patriotism in order to validate and/or excuse the illegal and immoral actions of the gang of criminals he runs. His denigration and bastardization of the term ‘hero’ is legendary. Lynch is disgusting, creepy, hazardous to humanity and will likely do well in politics someday.

While Tarantino may be guilty of an endless menagerie of repetitive cliches in cinematic format, he is not wrong about cops. Almost 1,000 people have already been killed this year by police in the US. This ranges from some cases of ‘justified’ use of force to blatant murder. Since police know their brothers and sisters in blue have committed these crimes but not had to face justice for them, that makes them accomplices. Thus the label murderers is factual. However, I might suggest that if Tarantino really wants to live in a world without badged killers that he stop glorifying violence to teenage boys who are just as likely to become criminal cops as criminals in the private sector. That tough guy shit is not just harmful to our cultural psyche, but is low hanging fruit that movie-makers with his talents and experience should evolve beyond by this point in their career.

So if you do decide to boycott Tarantino, I hope it’s only because his films are vapid repeats of male stereotypes, and not because some butthurt mafioso kingpin suggested it.