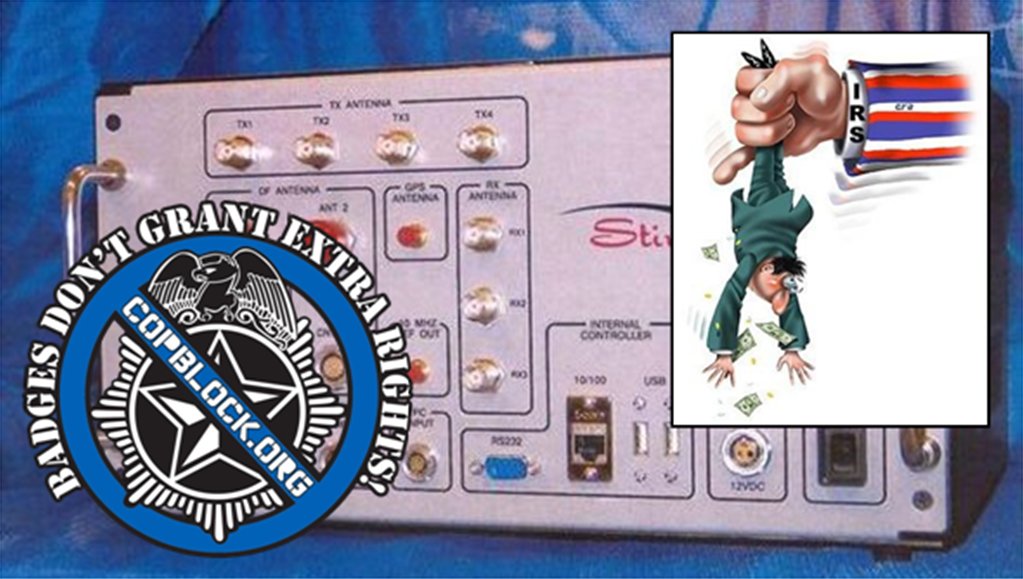 A USA Today investigation published in late 2013 first revealed that police departments across the country were utilizing whats been dubbed a “Stingray.” Stingrays are portable devices that mimic a cell tower and trick nearby cell phones to connect to them.

The Stingray then captures the connected devices’ data, allowing law enforcement to track users’ locations. They can also be used to intercept calls and text messages. Once deployed, the devices intercept data from a target phone as well as information from other phones within the vicinity. They are relatively small and easily transportable.

The ACLU has identified 56 agencies in 22 states and the District of Columbia that own Stingrays, but because many agencies continue to shroud their purchase and use in secrecy, much is still unknown regarding their deployment by law enforcement agencies nationwide.

Federal agencies documented using the devices include the FBI, NSA, DEA, and the U.S. Marshals – who were caught last year routinely attaching Stingrays to airplanes in order to pick up information from thousands of people on the ground. Now, another agency can be added to the list: the IRS.

According to invoices obtained by The Guardian via Freedom of Information Act requests, the federal tax agency purchased Stingrays in 2009 and 2012 from Harris Corporation, one of the primary manufacturers of the devices.

The 2009 invoice is heavily redacted, but the invoice from 2012 shows that the IRS spent $65,652 upgrading a Stingray II to a to a more power version of the technology called “HailStorm,” and spent an additional $6,000 on training from Harris.

Despite the FBI saying earlier this year that search warrants aren’t required to deploy data interception technologies like Stingray in public places, the Dept. of Justice said in September that federal agents must now obtain warrants to use the devices in most circumstances.

Details of how the IRS is utilizing the cell-site simulators are unclear – they have refused to comment on the invoices. Obviously one can speculate however, that the devices are being deployed to serve the agencies prime directive: collecting and pursuing individuals that wish to keep the money that they earn instead of having it stolen to pay for a corrupt government and the horrible “services” they provide.

Interestingly, the invoices show that the Stingrays were purchased at the exact same time the IRS began targeting libertarian and Tea Party groups for intensive scrutiny based on their names and political themes as they were applying for tax-exempt status. The Dept. of Justice said Friday that it is closing its two-year investigation into the scandal without filing charges against Director Lois Lerner or anyone else at the agency.

“The info showing [the IRS] using Stingrays is generally consistent with the kinds of investigative tactics that they are engaging in, and it shows the wide proliferation of this very invasive surveillance technology,” the ACLU’s Nate Wessler said. “It’s used by dozens, perhaps hundreds, of local law enforcement, used by the usual suspects at the federal level, and if the IRS is using it, it shows just how far these devices have spread.”

The Fifth Circuit Court of Appeals however, ruled in 2013 that individuals have no reasonable expectation of privacy over their location data. The decision stated that location data is a “business record” created by private companies with the implicit consent of cellphone users and therefore are not subject to privacy protections.

A ruling last year from the 11th Circuit Court of Appeals however, contradicted that ruling finding that police “must obtain a warrant before collecting cellphone location data.” In its reasoning, the court noted that while the Fourth Amendment has traditionally been applied to physical property rights, it has gradually expanded to protect much more, including electronic communications.

While the 11th Circuit ruling didn’t overturn the Fifth Circuit ruling because of their separate jurisdictions – and while Washington State joined Virginia, Minnesota and Utah in imposing a warrant requirement at the state level for using devices like Stingrays earlier this year – the privacy question is still far from decided across the country.