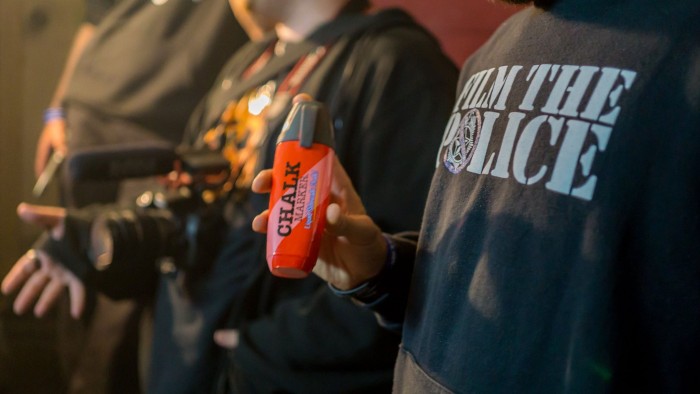 On Monday, October 26th, 2015, Ademo Freeman and Brian Sumner, co-hosts of the Cop Block MAC Tour, were arrested on outstanding bench warrants outside the Noblesville, Indiana Public Safety Building, related to a criminal mischief charge for chalking the same building at the onset of the tour in September.

By now, you may have heard of the MAC Tour hosts’ arrest by police in Kansas on Friday, October 16th on what was initially reported as an outstanding felony warrant from Indiana. The public has since learned the earlier arrest was unlawful, as the warrant issued was for a non-extraditable misdemeanor. Once free from jail the next day, Ademo and Brian decided the best course of action would be to turn themselves in after returning the MAC vehicle to their home base in Ohio.

I accompanied the pair on Monday night, as both had decided relinquishing their freedom would best be done in protest, while chalking the same public building which led to the ordeal.

After driving to Indianapolis to rendezvous with the local Cop Block chapter there, Ademo and Brian stopped at a Wal-Mart to buy chalk, got coffee from a McDonald’s, and began chalking the concrete directly in front of the Noblesville police station. Exercising their free speech to the fullest, the pair wrote messages such as “Bad Pigs Belong in the Pen,” and “How Many Will They Kill Before You Care?” The chalking continued for approximately 20 minutes. Local Cop Blocker Miah Akston filmed the event, seen in video below (skip to 6:45 to see arrest):

At approximately 8:45 pm, the first officer arrived on the scene, immediately asking if the chalking was “the handiwork” of the Cop Blockers. Ademo affirmed he and Brian were indeed the alleged artists, and informed the cop his police department was looking to arrest them. At that point, Ademo was cuffed, then Brian, as an additional four police cruisers arrived to the scene.

The MAC Tour duo was whisked away to jail to be processed, and the Noblesville police proceeded to collect discarded chalk pieces in evidence bags, before deploying a garden hose to remove the free speech messages from the public sidewalk. The cleaning took no more than 15 minutes, as both the liquid and traditional chalk washed away easily.

Arraignment hearings took place the next day (Tuesday), setting bond amounts at $2,000 each, and establishing a pretrial date for Tuesday, December 8th, at 9am. A motion to record the hearing was denied, but it is reported by an activist who attended the arraignment that Ademo and Brian have elected to represent themselves, and will “be giving even more judges even more shit.” Ademo and Brian have requested to NOT be bailed out, electing to remain incarcerated until at least the pretrial date, or if the charges are dropped. However, he has suggested on his Facebook wall to call the jail holding him, or the judge representing their case if you wish to encourage the state to do the right thing. In an earlier blog post, Ademo stated to the public:

At the most we’ll be in jail for 6 months – max sentence – and as soon as we’re out we’ll not only continue the Tour but kick it back off by chalking the Noblesville Police Department. Until then, feel free to call James Baldwin, the Judge in our case or (if you really want to let them know you disapprove) visit the Noblesville Police Department and exercise your first amendment right with some chalk. You never know, you might even be lucky enough to join us in a jail.”

The numbers are as follows:

A chalking protest is being organized by Cop Block activists around the country, and all are encouraged to attend before the pretrial hearing on December 8th, at 7:30 in the morning in front of the courthouse. Click here for the Facebook invite.

Additional information will be posted as it becomes available. For additional photographs, see this photo gallery.