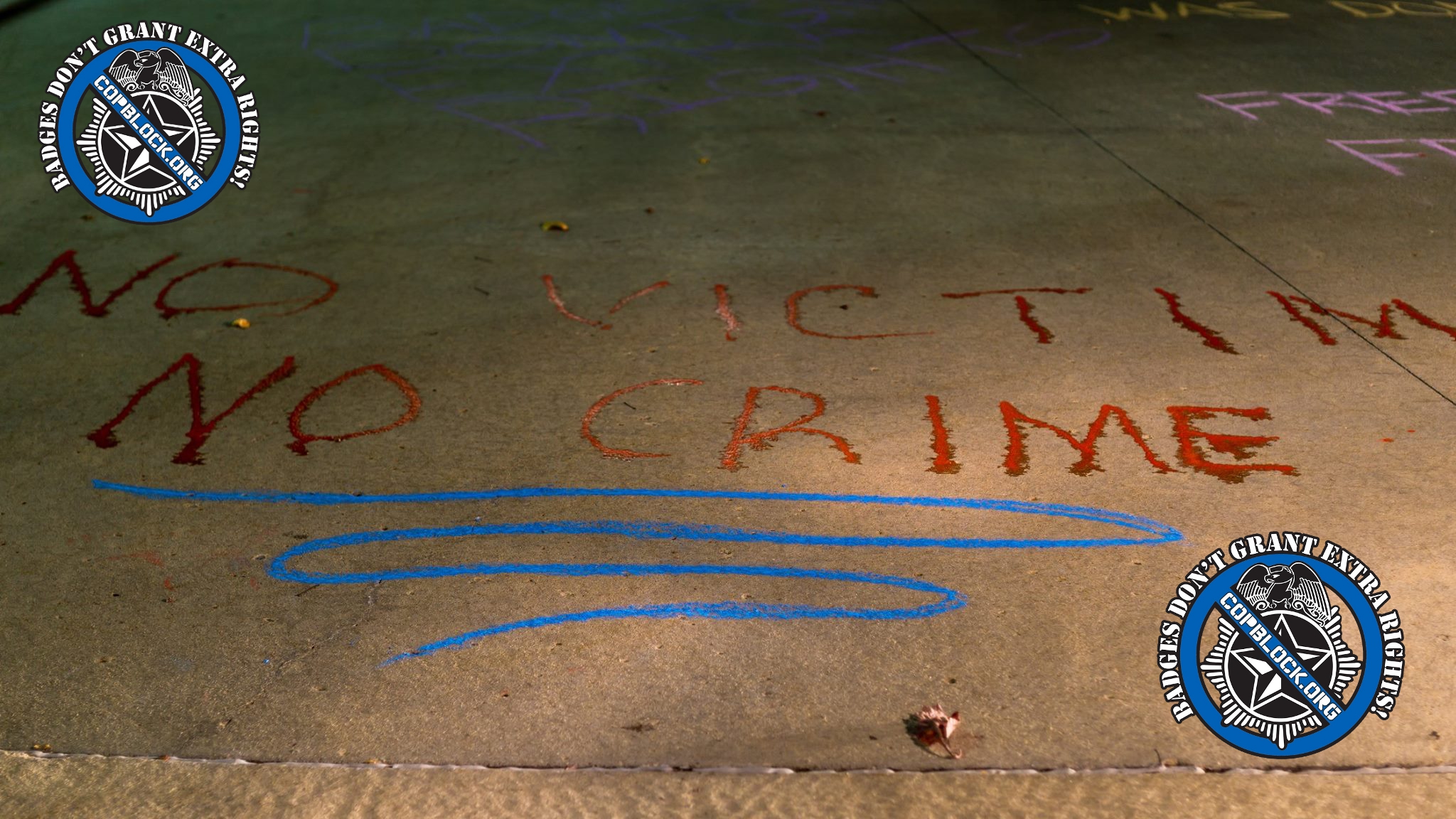 Below are first person accounts of the arrests and the initial court appearance for Ademo Freeman and Brian Sumner. Included below that are the videos of that arrest. See here for the Call Flood Request.

After the arrest in Kansas,  Ademo and Brian decided to avoid any further disruptions to the Mobile Accountability for Cops (M.A.C.) tour by dealing with the warrant issue in Indiana and turning themselves in now. They met up with a local Cop Blocker in Indianapolis and proceeded to gather up supplies and head to Noblesville. At approx. 8:30pm on October 26th, a group of five cop blockers ( including the M.A.C. team) headed over to the Noblesville police station to draw the attention of the local police force by chalking the same place that resulted in the original warrant.

After roughly 20 minutes of chalking and filming, the first signs of police presence were seen. One cop came running out of the entrance to the government offices with a second officer also running around the corner (obviously prepped to bring the ultra violence). Mere moments later, two police cruisers rolled up and more cops where beginning to surround Ademo and Brian. They began questioning the two about who they were and what they were doing, promptly arresting Ademo and seemed almost hesitant to arrest Brian, but ended up doing it anyway. During the arrests, the cops tried desperately to justify themselves and their actions, but could barely hold up against the backlash from Ademo and Brian.

One of the elder cops called out a question of who wanted to take Ademo to jail and one officer literally jumped and skipped at the chance. It was a shameful display. Ademo was the first to be taken across the street and placed in a local pd SUV, Brian wasn’t too far behind. He was taken to a different SUV, but this was a K-9 unit and Brian vocally protested having to ride in that vehicle with the dog. So the officers were just kind enough to put him in a different cruiser. After the M.A.C. crew was taken away, the remaining three cop blockers stayed and talked to the police and filmed them attempting to look professional while putting sidewalk chalk into evidence bags and photographing the sidewalk art. Eventually the police got firemen from the attached fire house to grab a garden hose and start washing off the chalk (which came right off) until they got tired of us filming and told them to just stop. This resulted in some of the officers and firefighters (chalk washers?) questioning why they were just going to leave it.

One of the cop blockers from the night before attempted to file a request to record the court hearing and was denied based on some supreme court ruling saying you cant record shit in Indiana for reasons. Regardless, at 1:15pm, the hearing was getting underway and the M.A.C. team were last to go up on the monitor connected to the local metal rape cage facility. The hearing was really nothing more than to declare bond amounts and ask the defendants if they wanted a lawyer and if they understood their charges.

While the judge was 100% set on not deviating from that purpose, Ademo put on a beautiful display of protest against the charges, the court, and the judge. Brian also questioned the entire farce with some of the best lines of the year (will be heard in upcoming audio recording purchased from the court ). The hearing for them ended without much fanfare and away they went to continue being kept separated and in different “pods.”

There’s been no word as of yet on whether Ademo has talked to anyone, but Brian did get a phone call out to his girlfriend and said he was OK and everything was alright. Their next pre-trial hearing is set for Dec. 8th at 9am. There will be an ALL HANDS ON DECK open carry chalking protest event held that very morning starting at 7am at the police station, court house, and well, the entire town. Then there is another hearing set for January 14th at 1:30pm. Other protests throughout the country are being planned.