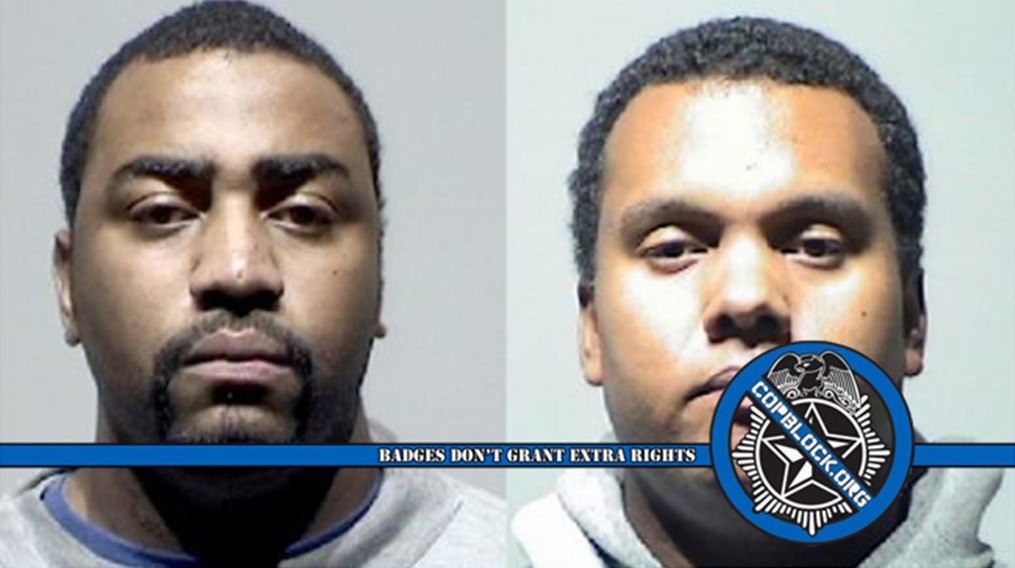 Two Detroit police officers have been suspended without pay after being charged with multiple misconduct and embezzlement counts stemming from incidents that occurred between March 18, 2013, and Sept. 27, 2014.

Tactical response unit (SWAT) partners Charles Lynem and Chancellor Searcy turned themselves in and appeared before a judge on Tuesday.

The Wayne County Prosecutor’s Office said that among the incidents include the arrest of a man at a gas station in the 10600 block of Outer Drive on the night of March 18, 2013, where the cops were alleged to have unlawfully confiscated some cash.

The man was charged for allegedly being in possession of drug and weapons – but the drug charges were dropped. He latter pleaded guilty to carrying a concealed weapon.

“It is alleged that there was a wrongful conduct surrounding the detention, frisk, seizure of property and the arrest of the suspect,” prosecutors said.

In a separate incident, the officers are also accused of fabricating  “the circumstances and documentation” surrounding the arrest of another man accused of carrying a concealed weapon.

That incident occurred on the night of Sept. 27, 2014 in the 8000 block of West Grand Blvd., but the case against the suspect “was subsequently dismissed because of the alleged fabricated circumstances and documentation issues in the case,” prosecutors said.

Searcy was also charged in two other cases – an Aug. 4, 2014 incident where he is accused of stopping a man and unlawfully taking money from him – and an Aug. 10, 2014 incident in which he is alleged again to have unlawfully seized cash.

In those two case, the men filed formal complaints with the Detroit police department, prosecutors said.

“Whenever an officer is accused of criminal misconduct, certainly it is a dark day for the department,” Detroit police chief James Craig said. “I stress that these are allegations. They’re both hardworking people that have been out there serving Detroit, and serving Detroit well.”

“We always take any allegations of misconduct… seriously,” Craig added. “We work for the people, and the people hold us accountable to enforce the law constitutionally.”

Last year – during the time of his most egregious alleged behavior – officer Lynem received a “TOP COPS” award in Washington, D.C., with an honorable mention as part of the National Association of Police Organizations program.

The two cops are scheduled to appear in court on Nov. 3 for a probable cause conference, and on Nov. 15 for a preliminary hearing. On Tuesday, they were each given $10,000 personal bonds for each case they were charged in and pleaded not guilty.