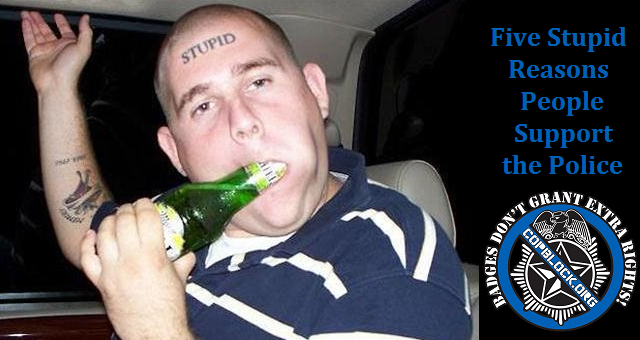 While there are more than just five basic reasons individuals throw morality, compassion and logic to the wind in support of police, these five seem to come up most often with the absolute worst fanatics of force.

When people give as their reason for supporting the police that they have a family member who is ‘on the badge’ you know that you can kiss a rational conversation on the topic goodbye. And while it is quite reasonable to extend your love to a family member despite their poor choices or questionable actions, you do not have to support the choices or actions themselves. Supporting the institution of policing in general because you share familial ties with one of its members is irrational. That would be like saying that you support drunk driving because your uncle Max does it. And saying that he is ‘one of the good ones’ doesn’t make it any less ridiculous. The fact is that the institution of policing is irrational and immoral on so many levels that it cannot be ignored or glossed over so you don’t end up having an awkward Thanksgiving with cop family members.

As I have said in the past, you should be talking to your family members about being a cop. If you love them it is absolutely your duty to, within reasonable limits, attempt to steer them from a career in corrosively inhumane institution. Only through your love might they be able to come to terms with the greater truth of the matter. Coddling those we love from the truth is just as bad coddling ourselves from it for those we love. If you can’t have truth and love simultaneously, you never really had either.

The most fanatic supporters of the state, both left and right, are avid enthusiasts of the Traitorous Critic Fallacy, which according to Wikipedia is defined as:

ergo decedo (Latin for “therefore leave” or “then go off”), short for argumentum ergo decedo, or The Traitorous Critic Fallacy as it’s referred to, means responding to criticism by attacking a person’s perceived affiliation as the underlying reason for the criticism rather than addressing the criticism itself. The critic is assumed an ungrateful traitor, and thus they should stay away from the issue altogether.

It’s categorized as an informal fallacy and a subclass of ad hominem.

Lucky for me, I often face this from both the political left and right.

The rabid right wingers will dismiss any criticism of police by claiming that its cause is ‘libtard bullshit’. The fact that I am not a supporter of the state in any of its equally awful flavors has no bearing on their reality, while they do not seem to be able to understand that my position on policing is based on what actually happens in policing and not as part of some prepackaged ideology I infected myself with in a voting booth. The great irony here is that this persistent attribution error is actually true of they themselves. It is them who believes that their support for the right and hatred of the left obligates them to take on a overzealous support of police. Because mindless support for authority is what ‘less government intrusion’ conservatism is all about, right? The fugk?

The other half of the time I am facing fire from self righteous leftists who think I want to get rid of police so me and my gun-toting survivalist friends can invade the suburbs and pick wives from their choicest females and drag them back to our underground bunker to keep them consistently pregnant and well versed in the Bible. Nevermind that institutionalized inequality was always upheld at the threat of state force, somehow the civil liberties supporters think using that same force to uphold their own political wish-list makes it all okay again. Yet the fact that I think the same cops that evolved from slave bounty hunters and were present at every act of state violence against women, homosexuals, minorities (and other groups left statists pretend to champion) should maybe not exist, somehow could only mean that I just don’t like cops because they threaten the redneck mayhem I would surely sow without them.

Not appeasing either of these groups is it’s own reward. But dealing with their logic is like trying to argue about monsters with a frightened child in the middle of the night. There are no words that directly bypass that kind of stupidity.

Somewhere along the way many Christians completely lost their fucking mind. A religion based around a Jewish dude who had all sorts of issues with authority and was killed by its hand has morphed into a worldview that accepts all earthly authority as infallible, or at least if its skin tone or flag has the right colors. And while I have previously argued that Christian principles are often in direct conflict with the police state, that is not the problem I am pointing out here.

Even if you hold on to some wonky piecemeal Sunday School theology that supports the police no matter what they do, we still have a basic right to freedom of religion. Which means that your religious preference for police should not be forced onto those who do not share your affiliation or views. I myself am a Discordian, but you don’t see me trying to force Catholics to eat a hot dog without the bun on Fridays, as such was the solace of our Goddess Eris on the occasion of the Original Snub. I don’t tell anyone if, when and how to shove wieners into their mouth, and I don’t appreciate it when others try to shove the cop dick in mine just because they find it spiritually appeasing.

#4: The Collapse of Civilization

The paranoid delusions and fear-based logic of these police supporters goes beyond irrational and ignorant into batfuck crazy. “If we didn’t have police everybody would be out in the streets raping everyone else to death and eating children.” According to these people we all desire maximum evil, yet despite these overwhelming urges, manage to keep it together because cops exist. It is a patently absurd world view since most people are intrinsically good, want peaceful and interactions and are willing to stand together when harmful human deviancy does emerge. People do terrible things now and some of those people are the police themselves, who thanks to police, are protected from consequences. Policing is little more than an organized army of sheep suits that wolves wear to prey on sheep under the guise of protecting them.

Yet the simplest argument against the immanent collapse of civilization in the absence of police is the fact that modern policing is only a few hundred years old, while civilization itself emerged thousands of years ago and developed and thrived without it. Given what the fear-based supporters of police believe, one would think civilization could not have occurred and endured without cops, yet that happens to not be the case at all. Cooperation is the glue of civilization, not force. Force is what destroys civilizations, often from the inside out. And police powers are based not on cooperation or mutual consent, but on force. Might makes right. You cannot argue that the weak need protected from the strong and then not expect the even stronger systematic and institutionalized force not to act like predators.

The people who argue that societies can only function when force is institutionalized are the same people who urged the old lady who swallowed the fly to eat a spider, and so on.

This reasoning works in a variety of ways. Some people who use bigotries to support police do so outright, with no qualms about it. Others do it more insidiously, hiding their real reason behind others that are more politically expedient. And a final type does it subconsciously, allowing fears that they refuse to acknowledge outright to guide their support for police. And by bigotry I mean race, class and any other fictitious label we use to make generalized statements and judgements about specific individuals based on the behavior of others we have conveniently shoved into the same categorical oblivion.

If you ever read the comments you have definitely seen the outright bigots cheering on police merely because they enjoy seeing cops cause suffering to members of their hated groups. I am not going to bother explaining why this is illogical, as it goes without saying for most of us. Bigotry is never based on sound reasoning, and so any appeals to the legitimacy of policing based on its ability to appease the hateful is without any intellectual merit whatsoever.

Yet at least they are honest, unlike those who are motivated to support police based on fear and hatred of others, while using pleas to ‘pragmatism’ or some other bullshit reasoning as their supposed basis for support. The upper eschelons of the middle class are quite often guilty of this, who use police to homogenize and gentrify their communities by sicking them on the poor and minorities whose presence they fear and despise. The upper class is entirely guilty of this, yet it is not very metropolitan to admit your prejudices publicly, so they enlist the ignorance and rage of the lower classes to provide a distraction from their own machinations.

Finally there are the unconscious or subconscious bigots. People whose prejudices linger under the surface of their reasoning leading them to simultaneously ignore their own latent hatred and fear while also acting in ways which ultimately endorse a bigoted response that satisfies their inner xenophobe. If the first type of bigot was a known known and the second a known unknown, then this last type is the unknown unknown; and likely constitutes the largest contingent of people who support the police as the thin blue line between US and THEM without fully realizing or admitting to themselves that this is their true motivation. The chief reason so many lives go unexamined is because they fear what they might find within. Yet the overwhelming goodness of these people could serve as salvation from their unwanted fears and hatred if only they would face themselves honestly with the desire to uncover their own imperfections and engage them.

So if you are a police supporter, no matter what reason you tell others that is based on, you at least owe it to yourself to know your true motivations and to be sure that they are logically valid, feasible and morally and ethically acceptable. It is okay to back down at any time, no matter how wrong you were, in order to become a better person. When your guns have innocent blood on them, it is time to stop sticking to them, and to start holding yourself accountable for being a decent person with infinite potential for evolution and growth who refuses to be held down by your own maligned or misguided beliefs.