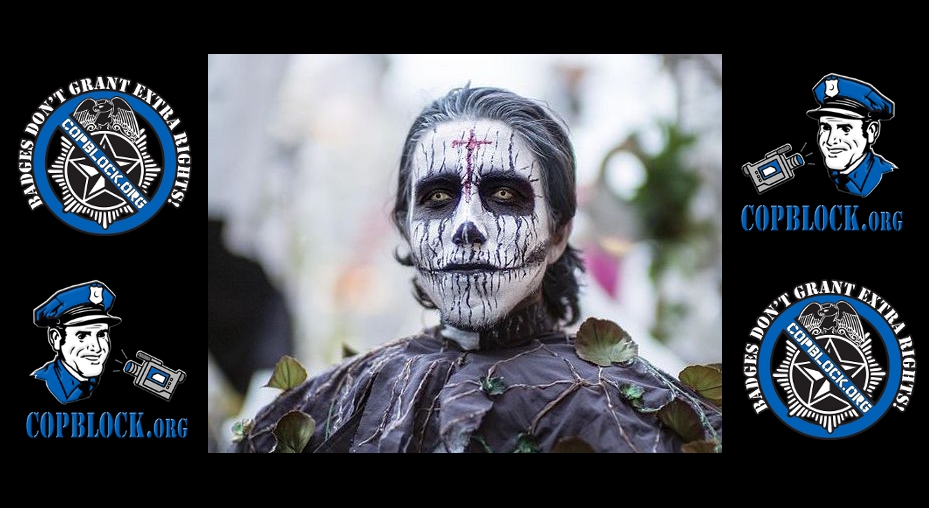 Police nationwide are on alert after the FBI issued a warning that they have received information Anarchist groups are planning to scare children, teens, and possibly even adults on Halloween this year. The FBI has refused further direct comment or to reveal any details about the alleged plans by these insidious Anarchist plotters. However, unnamed sources privy to the information have confirmed that the warnings included discussion of groups that were planning to conceal their identity and roam from house to house, often after nightfall in an effort to hide their movements and surprise their intended victims.

It’s reported that some of them have been waiting all year to partake in these elaborate scare tactics and have gone to great lengths to ensure their disguises are realistic looking and terrifying to innocent children and even squeamish adults. A common theme among these Anarchist conspirators tends to revolve around violence and death based imagery and/or demonic ritualism, although some have also been known to mimic well know celebrities or sports figures. A good percentage of the female Anarchists have also been known to blend sexual themes and even near nudity into their disguises in order to distract and mentally disarm their intended victims.

Unconfirmed but credible reports have also surfaced that these Anarchists groups have formed loose networks and some will be gathering en masse. They may even be offering rewards amongst themselves for those that are most effective at scaring others. In some areas, this will consist of internal gatherings where they will display their disguises to the other members of the group, who will determine the most scary participant utilizing various methods including (but not limited to) via purely democratic voting and a more republican method in which a small number of “judges” are selected and then tasked with the authority to declare a winner. Members who jeopardize the security of the group by showing up without a proper disguise are often denied entry and in some cases even expelled from the group.

Other reports state that plans have been uncovered in which Anarchists intend to turn entire houses into pseudo chambers of horror for people they will lure into them. Often times these houses have faux graveyards, depictions of executions, and intricately carved gourds out front that should serve as a warning to unsuspecting visitors. Once inside, these guests can be randomly terrorized by unknown individuals hiding in dark areas who leap out without warning or mercy. Many younger Anarchists have also been know to spend a large portion of the night traveling from one house to another within their own or nearby neighborhoods. They tend to congregate in packs knocking on random doors and demanding a ransom from residents that answer. Those who ignore or refuse their demands have in the past found themselves the victim of retaliatory acts including (but not limited to) having their cars hit with eggs and/or their trees littered with paper based bathroom products. Although not foolproof, their disguises generally inhibit the identification and prosecution of those that perpetrate such acts of vandalism.

Police departments are taking these warnings very seriously and anonymous sources have confirmed that the FBI reports have classified this as a definitive event that will undoubtedly happen and is unlikely to be prevented. It’s not a question of whether you or someone you know will be scared by these ruthless Anarchists, but how many times it will happen. Many advisers have recommended just cooperating and giving them a “treat” if confronted, rather than risk a costly or embarrassing “trick.”