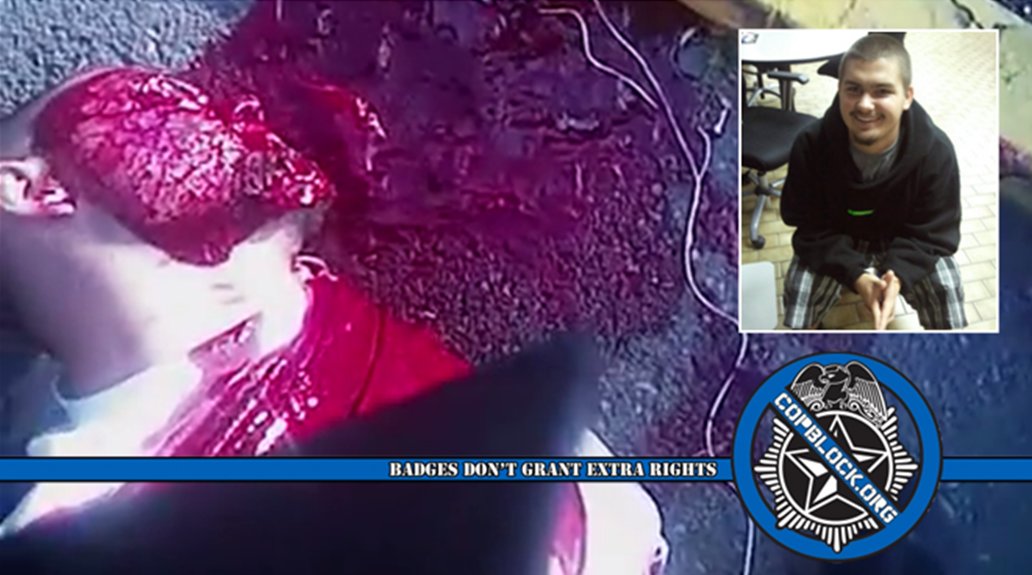 The family of a young man shot and killed by Salt Lake City police in a controversial and gruesome incident caught on video last year has filed a lawsuit against the city and the officers involved.

20-year-old Dillon Taylor, his brother, and a cousin were at a 7-Eleven in South Salt Lake City on August 11, 2014, when cops began searching the area after receiving a call from an admittedly drunken woman – the lawsuit says – which claimed someone was in the vicinity “waving a gun.”

When the three young men exited the convenience store they were surrounded by officers and ordered to show their hands. Two of the men stopped and complied. Dillon, who was listening to music, seemingly did not hear the officers and kept walking until he was shot and killed, his brother said.

The footage, recorded from Officer Bron Cruz’s body-cam, shows Dillon address the officers – with head phones in – and decline to comply with their commands to show them his hands.

Dillon’s brother Jerrail and cousin Adam Thayne were both taken into custody and questioned but neither were charged in connection with the original call police received. Both young men affirmed Dillon simply went to pull his pants up when police opened fire.

“They say they are here to ‘protect and serve,’ its more like ‘shoot and kill’ because he wasn’t a threat,” brother, Jerrail Taylor, said at the time. “He was shot twice right in front of me. There were no guns ever found and there never will be.”

Officials said Dillion had warrants at the time of the incident, which had been processed a week earlier by a judge for violating his probation. Sgt. Darin Sweeten stated, however, that police unlikely knew prior to the shooting.

In the days following the incident, Salt Lake City Police Chief Chris Burbank said releasing the body-cam footage “would be wholly inappropriate…prior to the officer having some due process.”

A short clip showing the events prior to the shooting was released in September, 2014, and the full version of the video was not released until June of this year. The disturbing and graphic footage shows an unarmed Dillon being shot before officer Cruz handcuffs his arms while his lifeless body bleeds out on the pavement.

Cruz had claimed he was afraid Dillon was reaching for a gun in his waistband and feared for his life when he fired the fatal shots. He was cleared of any wrongdoing last year after Salt Lake County District Attorney Sim Gill said the shooting was justified despite the fact that the Dillon was unarmed.

Gill also touted a Utah State Medical Examiner’s Office autopsy that said Dillon had a blood-alcohol content of 0.18 at the time of the incident.

In the lawsuit, filed on Wednesday, family said Salt Lake City, “improperly trained and groomed [officers] through a vicious culture and cycle of shoot-to-kill first, [and] avoid questions and accountability later.”

According to attorneys, they hope to obtain a department training video they believe instructs officers to automatically fear the public and engage in shootings unnecessarily without taking a proper gauge of the situation.

“Officer Cruz was brought up in a system that trained him to view Dillon as a threat and not look at the situation critically and take proper steps,” Attorney Robert Cummings said. “You have average citizens going in and taking on this mentality where they’re willing to abuse their fellow citizens, and it’s wrong, and it’s a systemic problem.”

“They could have deescalated [the situation] so many ways and they didn’t,” Taylor’s aunt Gina Thayne said. “They just shot. They just fired. They took his life.”

Protests, which had been held in Dillon’s honor last year, are expected to resume. Show your support for the young man by visiting the Justice For Dillon Taylor Facebook page and using #JusticeForDillon when sharing his story on Twitter.