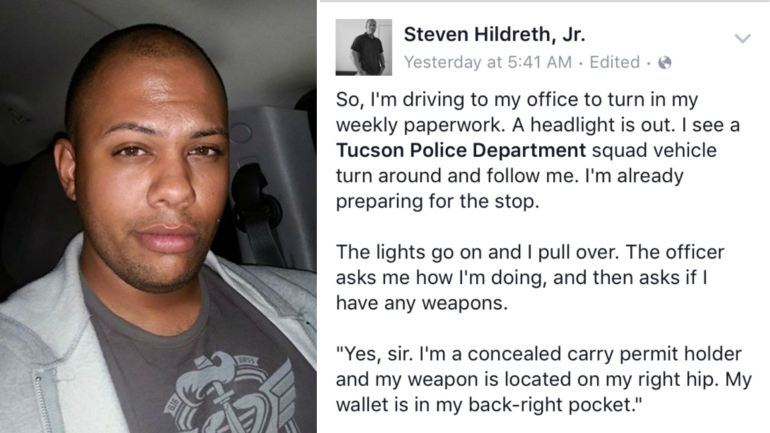 Multiple news outlets have circulated a viral Facebook post, dated October 27th, from author Steven Hildreth Jr. regarding a positive interaction with the Tucson Police Department. Hildreth describes being pulled over for a broken headlight. He informs the officers he has a concealed carry permit, and is currently armed. He cooperates showing them his weapon, and his permit card, which is out of date (though the permit is still valid). Ultimately, the police behaved courteously and let him off with a warning. He concludes the anecdote by saying:

I’m a black man wearing a hoodie and strapped. According to certain social movements, I shouldn’t be alive right now because the police are allegedly out to kill minorities. Maybe … just maybe … that notion is bunk. Maybe if you treat police officers with respect, they will do the same to you. I’d like to thank those two officers and TPD in general for another professional contact.

For Steven Hildreth Jr. and others sharing his lack of understanding of statistics: One positive anecdote does not negate the numerous testimonies of people who had the opposite experience. The police you interacted with were professional and displayed decency, but that in no way means there aren’t police who abuse their power and target racial minorities. There are, unfortunately, such police, and their (often deadly) mistreatment of minorities is a tragically common occurrence. Furthermore, have we really reached the point where cops doing their jobs without beating or killing those they interact with is a story worth sharing or celebrating? Should we really be congratulating the police for not killing us? Last I checked, protecting and serving the population was their stated job description. We should not be thanking them for carrying out their job in a calm and civilized fashion during a routine traffic stop.

Names of unarmed black individuals who were killed by police or died in police custody under suspicious circumstances are numerous. The Washington Post reports that this year, “blacks were killed (by police) at three times the rate of whites or other minorities when adjusting by the population of the census tracts where the shootings occurred”. A few recent high profile names come to mind: Eric Garner, Michael Brown, Tamir Rice, Walter Scott, Freddie Gray and Sandra Bland.

Even routine police work is often marred by racial bias. For example, prior to 2014, federal grants encouraged police to arrest and ticket as many people as possible for drug related crimes. Most of these arrests took place in minority communities. Black Americans are disproportionately arrested for drug use relative to their white counterparts despite similar usage and possession levels. In Los Angeles, minorities are more likely to be stopped and searched, despite having no more contraband than their white counterparts. Black men are also more likely to be wrongly convicted according to the Innocence Project.

This neglects to mention the racism inherent in drug prohibition, or the fact that many of the laws police choose to enforce (yes, they have discretion) disproportionately harm minorities and the poor. The police have a state sanctioned monopoly on violent force. Thus, I can’t help but be happy police have been under heightened scrutiny and criticism of late. Unlike most of those sharing Hildreth’s piece, I welcome the increased questioning of role that police and the laws they enforce play in our society. Questioning the status quo is the first step to finding better alternatives.

This post was originally published at the Center For a Stateless Society under the title “Congratulating Police for Not killing Us?” and was written by James C. Wilson . It is presented here unedited, aside from having some links added. If you enjoy his writing, you can support this author on Patreon.

So, I’m driving to my office to turn in my weekly paperwork. A headlight is out. I see a Tucson Police Department squad…