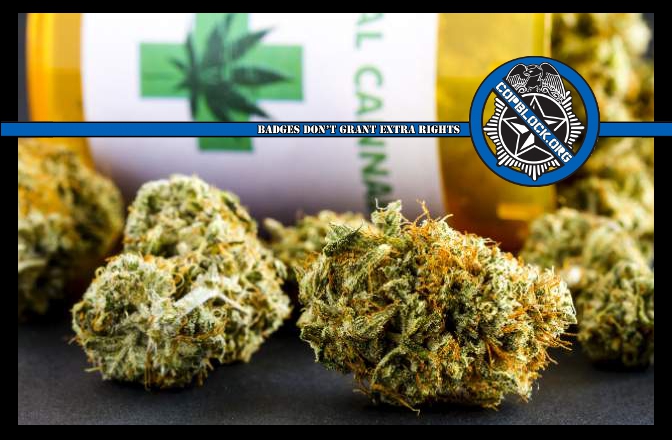 The Las Vegas Metropolitan Police Department (“Metro”) is being sued by two medical marijuana patients who were wrongfully arrested in 2013. According to the lawsuit, in spite of her being legally registered as medical marijuana patients and the arrest warrant actually stating that she was, several Metro detectives, including Detective Jeffrey Tabor, raided Courtney Rogalski’s home, confiscated her legal supply of marijuana; plants; and equipment used to grow those plants, and arrested her for possession of a controlled substance and possession of a controlled substance with intent to sell.

In addition, Westley McNeal, a California resident who was visiting Rogalski’s home at the time, was also arrested. Rogalski herself now lives in Canada. All the charges were later dropped.

The civil rights lawsuit was filed in August and also names the LVMPD as a defendant along with the detectives involved in the raid. Via the Las Vegas Review Journal:

According to the lawsuit, Las Vegas police detectives searched Rogalski’s home on Aug. 30, 2013, with a warrant signed by Justice of the Peace Cynthia Cruz…

Without such a waiver, Nevada law limits cardholders to 2.5 ounces of usable marijuana and 12 plants. According to the lawsuit, Detective Jeffrey Tabor authored the search warrant, which indicated that he established surveillance in May 2013 at a hydroponics business and watched as a 50-pound carbon dioxide tank was loaded into a vehicle registered to Rogalski.

About three months later, Tabor compared the power use at Rogalski’s home with three other homes in her gated community and found her home used an average of 3,698 kilowatts more per month than houses the same size.

In addition, Tabor drove past Rogalski’s residence on Aug. 27, 2013, and noticed that the windows on the east side of the home were covered with white plastic.

Tabor’s affidavit in support of the search warrant “is approximately 10 pages long and contains numerous paragraphs that have absolutely nothing to do with the criminal case” involving Rogalski, according to the lawsuit, which names Tabor as a defendant.

Attorney Cal Potter III, who represents Rogalski and McNeal, argues that Las Vegas police were not properly trained about the requirements of Nevada’s medical marijuana laws and “didn’t seem to care.”

Las Vegas police do have a history of harassing and even arresting medical marijuana patients, in spite of state law that allows for their possession and use of marijuana. Previous examples of that can be found on CopBlock.org here and here. The LVMPD and other Las Vegas area police also have a pretty long history of not being properly trained and not seeming to care about that. As well as a nonexistent history of accountability for their many abuses.