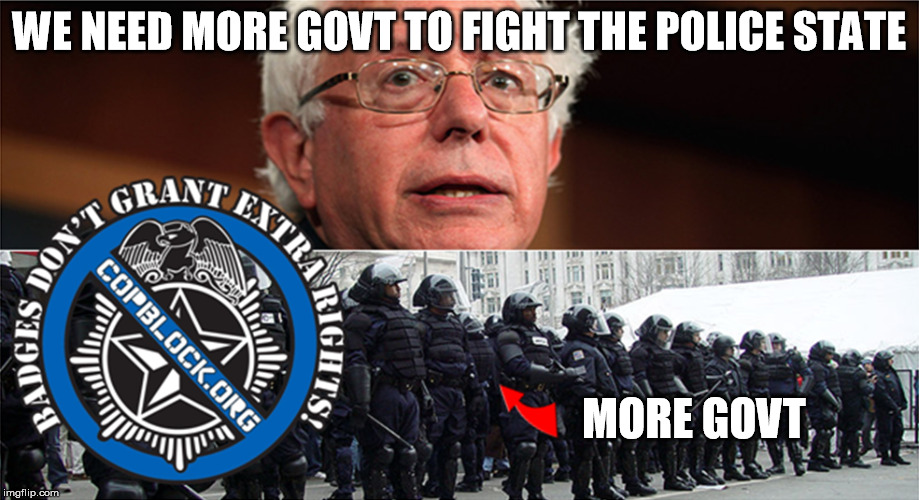 In a retort that drew dumbfounded looks from supporters, 2016 Democratic-Socialist Presidential Candidate Bernie Sanders admitted what many critics of the police state fail to understand: Police are a socialist institution.

When not promoting foreign wars, praising Fidel Castro, selling out bills to audit the Federal Reserve, or petitioning for policies that effectively price low income people, particularity minorities, out of the labor market – like minimum wage and occupational regulations – Sanders seems keen on pointing to “socialist” European nations as a justification for his draconian purposed economic controls and spending increases.

There’s just one problem. According to the Heritage Foundation/Wall Street Journal 2015 Index of Economic Freedom, so-called socialist countries like Denmark and Sweden have a similar or higher ranking than the U.S. in terms of how free their markets are.

This means these countries are not socialist at all, a troubling fact for “feel the Bern’ers” confirmed by Danish Prime Minister Lars Løkke Rasmussen who recently said in response to Sanders at Harvard’s Kennedy School of Government that, “Denmark is far from a socialist planned economy. Denmark is a market economy.”

Hailed by leftists of all stripes, greater government regulation of the economy is supposed to benefit the poor. The fact of the matter, as already alluded to however, is the exact opposite. Regulation has always historically been used by governments to oppress low-income minorities.

The first minimum wages in the U.S. were enacted by states seeing a large influx of newly freed slaves that were able to undercut white labor in terms of employment costs.

While some references to blacks being priced out of the labor market were made in state legislative drafts following the Civil War, George Mason University Economics Professor, Dr. Walter E. Williams, offers another example of how the mandated wages were utilized in his essay Minimum Wage Cruelty:

In the aftermath of a [1909] strike by the Brotherhood of Locomotive Firemen, when the arbitration board decreed that blacks and whites were to be paid equal wages, the white unionists expressed their delight saying, “If this course of action is followed by the company and the incentive for employing the Negro thus removed, the strike will not have been in vain.”

The minimum wage has had a devastating affect on black employment opportunities. Dr. Williams adds, in his essay, Racial Trade-Offs:

Today white teen unemployment is about 20 percent, while that for blacks is about 40 percent and more than 50 percent in some cities. In 1948, the unemployment rate of black 16-year-old and 17-year-old males was 9.4 percent, while that of whites was 10.2 percent. Up until the late 1950s, both black teens and black adults were more active in the labor market than their white counterparts. In fact, in 1910, 71 percent of black males older than 9 were employed, compared with 51 percent for whites. As early as 1890, the duration of unemployment among blacks was shorter than it was among whites, whereas today unemployment is both higher and longer-lasting among blacks than among whites.

It would be sheer lunacy to attempt to explain these more favorable employment statistics by suggesting that during earlier periods, blacks faced less racial discrimination. What best explains the loss of teenage employment opportunities are increases in minimum wage laws.

Occupational licensing has had a similar effect. This is important to consider in light of comments made by Sanders that he has “serious problems” with transportation service provider Uber, because it’s “unregulated.”

Wait, but I thought Sanders wants to help the poor? Aren’t business opportunities and cheap transportation alternatives just what poor people need? Without a large barrier of entry imposed via government licensing and regulation, every individual with a car is a potential small business owner. This is what regulation truly seeks to prevent – competition against established financial interests.

Regulations on transportation services are intended to protect consumers, but for the most part succeed only in raising prices and reducing quality of service, according to a report by the Mercatus Center.

The report’s authors, economics professors Stewart Dompe and Adam C. Smith, contend that ride-sharing services like Uber and Lyft are “revolutionizing taxicab and transportation services,” but have come under fire from “entrenched interest groups… [that] use government to protect their privileges and stifle market innovations”- a process known as ‘rent-seeking.’

“The goal of rent-seeking,” the economists explain, “is to create higher profits by lobbying politicians to impose costly regulatory burdens, such as licensure, safety prescrip­tions, and price controls, on their new competitors.”

It doesn’t take a lot of money to become a taxi owner-operator and earn more than $40,000 a year. One needs a car, an insurance policy and ancillary interior equipment to make a car a taxi. In New York City, to be a taxi owner you’d have to purchase a license – called a medallion – [which most recently sold for $740,000, down from over $1 million last year thanks to competition from Uber.] New York’s Taxi and Limousine Commission restrictions that generate such a license price outlaw taxi ownership by people who don’t have access to [$740,000.]

By contrast, in Washington, D.C., the annual fee for a license to own a taxi is [$475]. I’ll let you guess which city has more taxis per capita, cheaper fares and more black taxi ownership… There are vested interests who benefit from keeping outsiders out and therefore enrich both companies with large fleets and single taxi owners at the expense of would-be owners and the riding public through higher prices.

Like laws, regulations are enforced at the barrel of a gun by the socialized government policing industry – and Sanders seems proud of that recently saying, “When you call… the Police Department, what do you think you’re calling? These are socialist institutions.”

In 1920, the great Austrian economist Ludwig von Mises expanded on what is known as the “economic” or “socialist calculation problem” in his work, Economic Calculation in the Socialist Commonwealth. Mises describes the nature of the price system under capitalism and describes how individual subjective values are translated into the objective information (prices) necessary for rational allocation of resources in society.

Mises argued that the pricing systems in socialist economies were deficient because if a public entity owned all the means of production, no rational economic inputs could be obtained for capital goods as they were merely internal transfers and not “objects of exchange.” The same holds true for any line of production socialized by government.

As socialized industries like security (policing) and defense (military) have no genuine economic inputs – that is to say, no objective money prices as determined voluntarily on the open market established by how much individuals are willing to pay for such “services” – government is unable to properly discern, relative to demand, if what it is engaged in is of overall benefit.

Systems of private property and voluntary exchange however, enable consumers to compare – via a medium of exchange (money) – the costs of goods and services without having to obtain knowledge of their underlying factors of production.

As consumers rely on their own personal cost-benefit analysis – prices develop – which are contingent on how much voluntary paying consumers are willing to pay. The resulting price system therefore, promotes the economically efficient deployment of resources relative to demand.

This is called the signalling function of prices, as well as the rationing function which prevents over-use of any resource. Without this market process to fulfill such comparisons, Mises argued, there is no way to compare different goods and services and/or rationally calculate profits and losses. Absent this feedback, socialized industries like policing lack the means to relate consumer satisfaction to economic activity – which ultimately leads to surpluses and shortages.

Without a law enforcement industry that has been socialized by government, private companies would be competing on the open market to provide citizens with the lowest cost, highest quality service available. Among other things, this would reduce police misconduct because firms that employee violent law enforcers will loose market share as customers flee to their cheaper nonviolent competitors – a choice we simply do not have in the current state run system.

By no longer designating law enforcement a public good, private firms would have to foot the bill themselves for the abuses of their employees. This means, to avoid these costly pay-outs, firms would undoubtedly demand rigorous ethical and moral standards as outside arbitrators would hold their employees much more accountable than the state apparatus they once belonged to otherwise would.

This may seem like a radical idea to some but a government monopoly, in any arena, does three things: Restrict personal choice, draw up costs, and drive down quality. Certainly, having the individual liberty to choose who provides you with law enforcement services is preferable to a forced government monopoly that demands taxpayer money to not only pay for its abuses, but to function at all.

Don’t think so? OK Sanders supporters  – continue being a state-socialist sycophant that ignorantly rails against the police not knowing that it is the very policies that you support that perpetuates their brazen brutality.

Yes Sanders is good on the drug war and has said militarization of the police is a problem, but as already alluded to, just who do you think would enforce all of his new economic regulations? Don’t like children being harassed by cops for selling lemonade? Don’t like black men being killed for selling un-taxed cigarettes? Well, stop being a state-socialist dupe that supports candidates that will expand the regulatory leviathan.

For more on how socialized government policing monopolies can neither serve nor protect you, CLICK HERE. For more on how Bernie Sanders is wrong CHECK OUT THIS FREE E-BOOK.