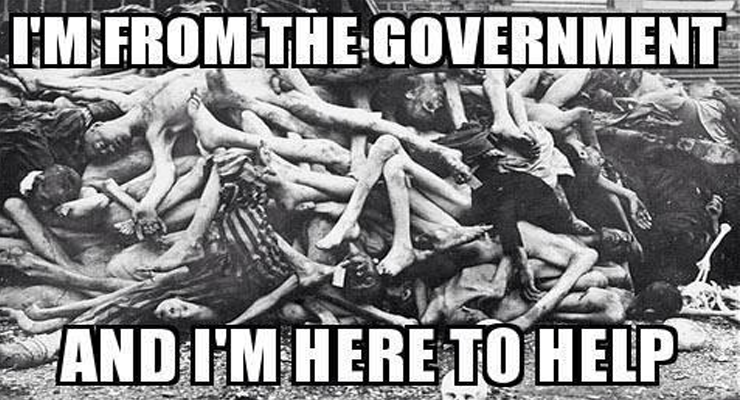 All over the World (more so in the U.S) the enforcement class is held in high regard. Whether they are law enforcement officers or members of the military, the general public has a propensity to place them on a pedestal. This is partially due to to well designed propaganda that portrays the members of these institutions as heroes and protectors. It also has to do with the fact that they work for the government. Government has a well known track record of labeling its henchmen as heroes and anyone who questions that narrative is considered unpatriotic. To make matters worse every 4-8 years the ruling body of government has the opportunity to shift and whoever can maintain a voting majority (or buy it) can maintain control of the machine. These constant shifts cause the laws to change, inevitably reshaping police, as the enforcers of the will of the ruling majority instead of protectors.

The police like many others employed by the government to fill the ranks of the enforcement class take solemn oaths to subjectively protect, defend and uphold the rights and freedoms agreed upon as the natural rights. At first glance this would seem like a very noble endeavor indeed. To willingly place yourself into danger in order to preserve the liberties of complete strangers is in fact a noble action. In fact when I told my friend David that I was going to join the Army, “noble” was the exact word he used. Looking back, if I’m honest, I didn’t protect, defend or uphold liberty in any fashion.

Unfortunately these noble desires are quickly removed through rigid training and indoctrination. There is no evidence that war, or ambiguous police operations, have ever made anyone safer or more free. More often than not the government restricts the rights of its citizens but rarely are they ever returned. We still are under restrictions from old legislation penned during the cold war and the powers of the police have been expanded, thanks to legislation penned to keep us safe from ambiguous middle eastern extremism.  Both of these actions force people who are unsupportive of the issues to fund them regardless of opinion.

The police enforcing the laws they can’t be held accountable for anything that happens to you even if you are in court ordered protective custody. They also are very public about the calls they will and will not respond to. Oakland police chief told the community to suck it when came to extortion, embezzlement, grand theft and plenty of other crimes. This could have been a bartering tactic in a deal with the city to keep from downsizing the department. Regardless people’s safety and freedoms are not something the people entrusted to protect them should be  gambling with. Chicago Police aren’t responding to burglaries as they have better things to do than try and find your stolen property. If they are so open about their selective enforcement policies, why do they overlook crimes with victims but go after those without?

It’s understandable that no one wants to believe that they are the monetary foundation of violence in their community, however it is not an excuse to follow the status quo and continue to perpetuate the existence of monopolies on protection. If there were market incentives the current police system would not be able to survive. No one in their right mind would voluntarily pay for a service that they are not guaranteed to receive. If you went through the drive through and there was no guarantee of receiving your order, it’s not going to be too long before you find another establishment that will hand you a bag of food every time you pay for them.

Not only are the police protected from protecting you, they will also happily take away your freedom. Historically the enforcement class has repeatedly removed the freedoms that they swore to defend and turn its guns on the people they claim to protect more than one. The national guard shot into a crowd of Vietnam war protesters in 1970 at Kent State University in Ohio.  In 1993 in Waco, Texas federal agents burned down a building belonging to the Branch Davidians, killing 82 of the very people whose freedom they claimed to defend. I can think of no greater deprivation of freedom than to take someone’s life. That can be seen as the ultimate loss of freedom and property. If the protection of these freedoms were so important that they would swear an oath to uphold and defend it; why would they follow orders or seek to act as the tool of someone who is looking to restrict them? Would they not be more satisfied in knowing that they chose to stand on the side of freedom regardless the consequence? Members and supporters of the enforcement class are quick to spout off poorly thought out excuses to justify their actions or existence. Often times phrases like “I’m just doing my job” or “I didn’t  make the laws, I just enforce them” are used by the states henchman and their supporters to justify immoral actions. The problem with these phrases is that they don’t mean anything, they are just excuses for the individuals who act violently against others and hide behind an order to avoid accountability for their actions. These excuses weren’t good enough for the Nazis and they are NOT for the current paradigm of law enforcement either.

Most of us grew up being told not to hit people, not to take stuff that wasn’t ours and to always tell the truth. The enforcement class is trained and conditioned to operate the opposite way. In fact, Sunil Dutta a 17 year veteran of the LAPD wrote an Op Ed offering advice to help survive a police encounter. The article was full of excuses for violence, victim blaming and paranoia. It was actually frightening to have this open of a look into the mindset of a cop.

Sunil Dutta is hero to a large demographic of thin blue line supporters. Both personally for his accomplishments as a policeman but also by holding status as a member of the enforcement class. This arbitrary affiliation grants him elevated status above the rest of the population.

I only have one question about this man’s hero status.

Would a hero respond with this advice when asked how to survive a police encounter?

DON’T ARGUE WITH ME, DON’T CALL ME NAMES, DON’T TELL ME THAT I CAN’T STOP YOU, DON’T SAY I’M A RACIST PIG, DON’T THREATEN THAT YOU’LL SUE ME AND TAKE AWAY MY BADGE. DON’T SCREAM AT ME THAT YOU PAY MY SALARY, AND DON’T EVEN THINK OF AGGRESSIVELY WALKING TOWARDS ME. – Sunil Dutta That sounds more like a violent authority figure drunk on his own power? I believe it would be safe to assume that no self respecting defender of your liberty would tell you to submit or face criminal charges and/or physical harm for exercising the freedoms they so proudly proclaim to defend on your behalf. By signing up for the enforcement class, scrutiny should be something that you are prepared for. When you take on the responsibilities of protector you should prepare yourself to answer for your actions and be held accountable. Hiding behind your badge and your gun only creates tensions between the enforcement class and the community, as well as, perpetuate an image that you not only don’t keep us safe, but also have no interest in even attempting to do so.

Which is why you can’t, and most of us don’t, count on the enforcement class to defend our freedoms.