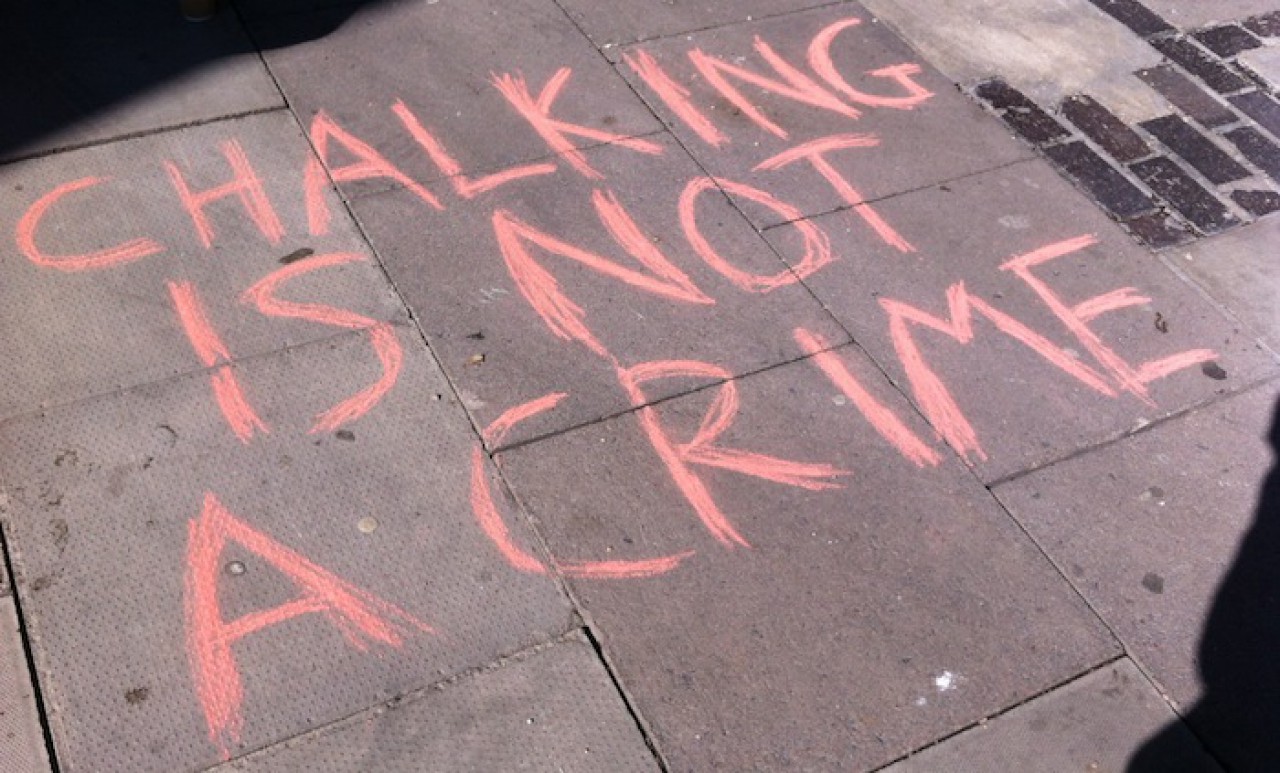 For the past two weeks Brian and myself have been attempting to clear our names of ‘criminal mischief’ charges issued to us by the Noblesville Police Department. We published the phone numbers and names of those involved (and will continue to do so) while encouraging folks who believe that “chalking is not a crime” to call flood these actors with hopes of persuading them to drop our charges. When that didn’t work Brian and I turned ourselves into the “authorities” and spent a week in jail hoping to force the state to drop the charges. Then Brian bailed out of jail because Hamilton County Jail officials took his phone privileges and put him in a two person cell that already had two inmates (meaning he’d be sleeping on the floor) – read his account of that here. Sadly, neither of those actions have been able to get the frivolous charges against us dropped.

Though we didn’t get the charges dropped we most certainly raised awareness and were a thorn in the side of the police, jail, and city officials since returning to Indiana. Also, we were able to get the police reports, pictures, and security footage detailing the case against us. For those unaware, Brian and I recently kicked off a seven month “Mobile Accountability for Cops” tour and one of our first stops was in Noblesville, IN where we chilled for the day and chalked the police station at night. Afterwards we were approached by several Noblesville Police officers and recorded our interaction with them – see below.

After our encounter was over, we headed out of town and on to our next stop. It wasn’t until a few weeks later that we found out that the Noblesville police had issued warrants for our arrest based off the chalking incident. The warrants didn’t have the details of the case, but Brian was provided with a discovery while in jail. For the past two days we’ve been looking over the (their) facts of the case and figured we’d share this information with you.

Included in the discovery was pictures of our chalking artwork, more pictures after the clean up, several police reports and the security footage from the police department the night we chalked it. We’ve uploaded the pictures to Imgur, the documents to Scrib and the video which all are embedded below. Below each is a short summary of how we feel about the evidence and as you comb through it don’t forget to ask yourself, “Who are they protecting!”

First off, I’d like to thank Officer Craig Denison for the pictures he took of our chalking masterpieces. Sure, they aren’t professional quality but we didn’t really take any since we never thought this would amount to what it has, so thank you Craig. Below are the pictures that Sgt McGovern took that show that the chalk still needed to be cleaned off after the fire department’s first attempt ‘failed.’

In the photos above taken by McGovern you can see a little bit of the Blue Liquid chalk but is that a reflection of the liquid chalks permanent nature or that of the quality of work done by city officials? For example, Brian wrote “How Many Will They Kill Before You Care?” In one of the after pictures you can still see it (very faintly), but that was written with traditional sidewalk chalk. The only reason this is still visible after the fire department’s attempt to clean it up is because they simply missed it!

And though the criminal mischief law does talk about damage, we highly doubt the state is going to argue that either variety of chalked created damage. No, instead they’ll argue that Brian and I defaced the public property but is that really the issue? Below are the reports, hosted via Scribd.com, and there are a few interesting quotes in them.

Aside from the complete and utter silliness of these charges from the start, the report has a few hilarious moments of it’s own. Not only does the city claim that it took two men with a power washer 3.5 hours to clean up the chalk for just over $400 worth of billable time (Brian and I smashed that time with a garden hose – see here), it also states that “some of the graffiti was still legible, specifically the phrase of “#BLUE LIVES MURDER” and “BADGES DON’T GRANT EXTRA RIGHTS.” In that same report by T. Hendricks, he declares the clean up a success by stating, “The cleanup was mostly a success, as all that remained was some faded colors that were no longer legible.”

So was the issue that we defaced the property or that the Noblesville Police Department officers didn’t like what we wrote. They clearly had the goal of making it ‘not legible’ and if that’s the case, seems they were more upset about what we wrote than what we wrote with.

Sadly it seems this will have to play itself out in court – at taxpayers expense – because none of the city prosecutors are willing to drop the case at this point. Though it didn’t work the first go around, we still appreciate anyone who’s willing to give the folks listed below a call and ask, “Who are you protecting?” I’m not expecting the city to bend at any of our actions to stop them from caging us. It’s probably a forgone conclusion that we’ll end back in a cage because a courtroom is the last place you find any common sense, let alone justice.