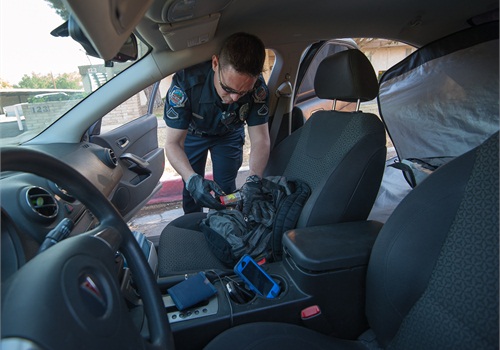 Police in East Rock Connecticut will be investigating local residents vehicles and confiscating valuables that are left in eye-view of unlocked vehicles under a new “caretaker program,” according to the New Haven Register.

Lt Sharp determined that this program is a great way to remind locals to lock up in his policing district and if something turns up missing while your car is accessible, your valuables may be in the New Haven police property room.

In a East Rock management meeting Sharp told residents “It’s called a caretaker,” and “When it comes to a car, if there is something in plain view that is of value, and the car is unlocked, law enforcement can go into the car and retrieve that item and take it into the property (room) and place it where it is safe.”

The process requires police to run the vehicles plates and attempt to reach it’s owner to remind them to lock up. If they can’t reach them, the officer will confiscate your property, lock your door and leave you a ticket letting you know when you can pick up your belongings from the police property room.

This comes a month after we confirmed Illinois police have been entering cars in a similar initiative to remind residents to lock up called Gotcha.

Lieutenant Sharp told the New Haven Register that “The bad guy is not going to break into the car and be able to take that item. It inconveniences the person to come down and pick up the property,” and “maybe next time they won’t leave their stuff in plain view.”

The process requires police to run the plate number of the vehicle to try to reach the owner. If they can’t, the police will take the property, lock the car door and leave a receipt informing them who has the item and what time to come and pick it up.

Not everyone is comfortable with the idea leaving some locals concerned, according to local news affiliate WTNH.

“It seems odd,” said Kristen Zalota who lives in East Rock. “It’s an interesting way to combat crime I guess.”

It seems a little invasive, I’m uncomfortable with the idea,” said Corey Hassell.

“There is an exemption in standard search warrant provisions to allow for this caretaker action,” said Grotheer.

According to NBC, the city attorney advised New Haven police to put the trial program on hold, according to New Haven Mayor Toni Harp’s spokesperson. Police were planning on piloting a program that involved officers taking valuables from unlocked vehicles in the East Rock neighborhood in the city.

Who comes up with these horrible programs?