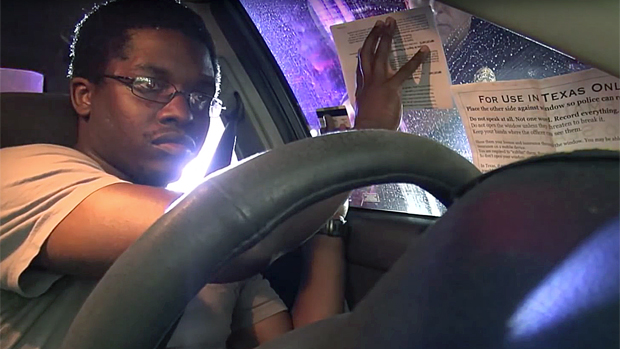 PINAC correspondent Phillip Turner was arrested tonight for video recording a Fallen Officer memorial in front of the Galveston Police Department in Texas.

The arrest was captured by his friend, Dave, who was not arrested, even though he stood about 40 feet away recording the arrest.

The cops apparently did not realize the two were together, even though they both were carrying cameras.

“The only difference is that I’m a clean-cut, older white man and he is a younger black man,” Dave explained in a phone conversation with Photography is Not a Crime Wednesday night.

Dave, 54, even had a conversation with one of the officers as he was recording.

The cop told him, “he was filming another police department earlier, so he was suspicious.”

But Dave was also at the Texas City Police Department with Turner, also recording. With one of Turner’s cameras nonetheless.

Turner’s arrest left Dave stranded about 25 miles from his home in  Kehma because Turner had driven them to the station earlier that day.

He says police tried to enter Turner’s car and may have even gained entry, even though they  did not have a warrant.

As of 9 p.m., Dave was still waiting for a friend to pick him up and take him back home.

He said he will download the footage and send it to PINAC by tomorrow morning.

Because it is Turner’s camera, he is not even sure if the video is on the camera’s hard drive or memory card as it has both capabilities.

He is mainly concerned about Turner’s safety and encourages readers to call the station.

“Everybody needs to call,” he said. ” Just to let them know we know he’s in there.”

He said about four cops came rushing out the building and  swooped him right up as he recorded.

“They saw me recording but didn’t ask me any questions,” he said.

And they didn’t even seem to mind when he asked them questions.

But during the phone conversation with PINAC, he said he was trying to keep out of police sight in case they viewed the surveillance video from earlier that day at the Texas City Police Department and realize he is Turner’s friend.

Turner, a proud Jeff Gray protege, runs the YouTube channel, The Battousai, which has been gaining popularity for his even-headed but bold style of video activism.

Last month, he recorded himself playing NWA’s Fuck the Police while being pulled over in retaliation for having video recorded the same cops moments earlier.

Dave, who is one of Turner’s 5,500-plus subscribers, was arrested himself recently after photographing a sign in front of the La Porte Police Department.

He sent that video to Turner, who posted it on his Youtube channel last month. The video is posted below.

If you leave a comment on their Facebook page, try to make a screenshot in case they delete, which will come in handy if we need to sue them over destruction of public records.