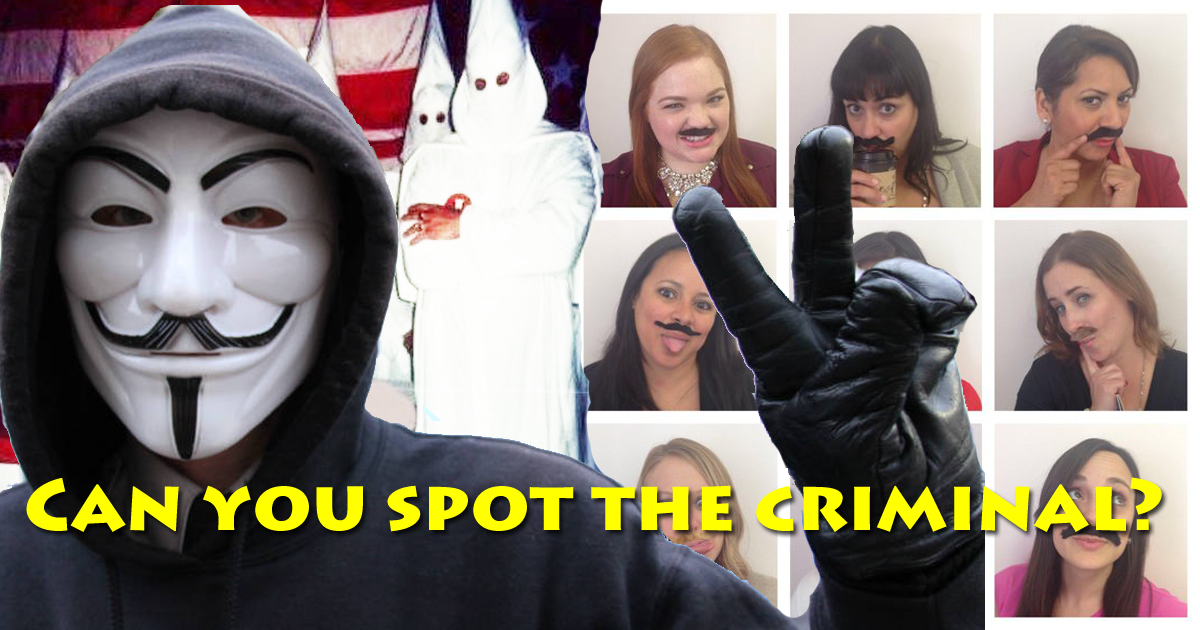 On November 5th, thousands of people will be donning Guy Fawkes masks and participating in the Million Mask March. If they do it in Virginia, however, they put themselves at risk of a felony conviction. From the Virginia code:

18.2-422. Prohibition of wearing of masks in certain places; exceptions.

It shall be unlawful for any person over 16 years of age to, with the intent to conceal his identity, wear any mask, hood or other device whereby a substantial portion of the face is hidden or covered so as to conceal the identity of the wearer, to be or appear in any public place, or upon any private property in this Commonwealth without first having obtained from the owner or tenant thereof consent to do so in writing. However, the provisions of this section shall not apply to persons (i) wearing traditional holiday costumes; (ii) engaged in professions, trades, employment or other activities and wearing protective masks which are deemed necessary for the physical safety of the wearer or other persons; (iii) engaged in any bona fide theatrical production or masquerade ball; or (iv) wearing a mask, hood or other device for bona fide medical reasons upon (a) the advice of a licensed physician or osteopath and carrying on his person an affidavit from the physician or osteopath specifying the medical necessity for wearing the device and the date on which the wearing of the device will no longer be necessary and providing a brief description of the device, or (b) the declaration of a disaster or state of emergency by the Governor in response to a public health emergency where the emergency declaration expressly waives this section, defines the mask appropriate for the emergency, and provides for the duration of the waiver. The violation of any provisions of this section is a Class 6 felony.

The legacy of Guy Fawkes and the 5th of November dates all the way back to 1605, but due to its current anti-government connotations, I doubt Virginia’s legal system would recognize it as a “traditional holiday costume.”

How did this outrageously draconian law come into being? As with most of the statutes that come to deprive us of our liberties, this one was crafted with good intentions – stopping the Ku Klux Klan from terrorizing black residents in the state. In fact, the Anti-Defamation League refers to these laws as Anti-Klan statutes, and there are as many as 15 states that still have them on their books. However, most other states that criminalize mask-wearing treat it as a misdemeanor offense.

While the KKK still exists, its members are not the ones getting caught up in this outdated law in Virginia these days. Seth Christman, a Marine veteran, unknowingly ran afoul of this law while out skateboarding with a Guy Fawkes mask on in Fairfax County. In addition to the felony mask charge, Christman says he was also subjected to an illegal search of his vehicle and even a strip search. His GoFundMe campaign describes the strain of facing a felony charge and an uncertain future: “Not only has this taken up a year of my life, and created huge financial struggle, but it also eats at me everyday.”

Christman captured part of his arrest on video.

Bicyclists have attempted several times to get the law amended to allow for protective cold weather gear such as balaclavas; A member of the Virginia Bicycling Federation even testified to the state legislature in 2013 about being threatened with a felony while out riding:

“I spoke in favor of the bill, and explained that I had been stopped and told I was in violation of the law punishable by a felony… I went on to note that although I had not been charged with a felony, the mere possibility was enough of an imposition [on liberty] for me to be unable to enjoy our beautiful Commonwealth, commute to work under freedom of choice of transportation, or even visit the historic battlefields without fear of becoming a felon.”

Another member describes the reaction from state legislators (emphasis mine):

“It seems that this Face Mask law goes back to Ku Klux Klan days, and the law enforcement people think it has real value in preventing hold ups. Del. Bell and the Committee members recognize the need for some exceptions, including for bicycling in the winter, and are willing to consider language that “will not open up Pandora’s Box and be an excuse used by hold up men”.

These sentiments were echoed in 2014, when residents tried and failed again to have the law amended:

“I’ve gotten some push back on the bill from the business community that is concerned about someone coming, wearing a mask and going into a store or a bank or something and robbing it.”

The stupidity of statists truly knows no bounds. That anyone believes an obscure law that hardly anyone in Virginia even knows about is actually keeping them safe is beyond absurd.

While fears of religious persecution have been raised, I haven’t see any cases of women being arrested for wearing burkhas or other religious garb. Cops and prosecutors are smart enough to realize that the law would be guaranteed

to be struck down if challenged in such a case. Everyone else, however, appears to be fair game, and this law provides a convenient tool to harass and disenfranchise protesters, and anyone else wearing a mask without any intention of engaging in criminal activity.

I have found a few news reports of the law being used against peaceful protesters:

It’s also possible that these statues are used to criminalize homeless people who try to protect their faces from the elements. However, it’s impossible to know how often people are actually arrested under this statute or in what context since Virginia’s court records are notoriously difficult to access. In fact, the state’s court clerks are being sued for refusing to release records to a local newspaper under FOIA. Even without knowing how many people are stripped of constitutional rights such as voting and owning firearms, or face financial hardships due to fines and court fees, and being cut off from employment opportunities as a result of this law, it’s obvious that this statute is seriously flawed and ripe for abuse, and Virginia’s legislators are perfectly fine with that.

Donate now to help keep a veteran from going to jail for wearing a mask!

Seth Christman has emerged victorious after battling to preserve his constitutional rights over the invented crime of wearing a mask in public. On November 17th, Christman went to court and was found not guilty by a jury of his peers, showing that reasonable people  view such a charge and subsequent prosecution as completely without merit and a waste of time and money.

Since first writing about Christman’s case, I learned that a prominent DC activist, was arrested under DC’s mask law while protesting a neo-Nazi meeting on Halloween. The DC Direct Action Network describes the incident (emphasis mine):

“On Halloween night, protests at the neo-Nazi National Policy Institute convention continued until the Nazis had to leave. At arount[sic] 10PM, all of the Nazis tried to flank the protesters by going around to the F st doors while protesters were on 14th st. Protesters saw this developing and charged over, getting there first. The resulting situation drew bike cops. Meanwhile, a few activists were still on 14th st. A white supremacist named Sam Dixon, former lawyer for the KKK, asked the police to arrest Sima for wearing a mask-and they complied…

…Police arrested a person of color for protesting Nazis, apparently at the request of a former lawyer for the Ku Klux Klan…

For most of the evening, the protest consisted of large banners calling out the fact that neo-Nazis were meeting at the National Press Club plus a sound system. The event was billed as a “costume party” for Halloween. Halloween being a night were people customarily wear masks, there was a werewolf mask and many “ninja” outfits. There are no reports of anyone else being arrested for wearing a mask on Halloween. Mask laws were originally written for use against the KKK, yet here we have a Klan lawyer insisting these laws be used instead on anti-fascist activists-and police accepting orders not from a judge, but a former KKK attorney. In addition, no activist perceived as white was targeted[sic] for arrest, but given that the orders came from a former Klan lawyer this is no surprise. Having MPD effectively taking orders from the Klan is unfortunately no surprise either. For decades people have said “the cops and the Klan work hand in hand” and here we have just such an example.”

Charges were dropped when Lee went to court on November 19th, but she of course still has the arrest record (just like Christman does) and according to DC Direct Action Network’s report, “evidence was found that police had tampered with her phone,” while she was in custody. That was likely cops fishing for info on Sima and other activists without obtaining a warrant as required by the Supreme Court.

Some people responding to this article when it was originally published decided to be deliberately obtuse and stuck on stupid— insisting that it was non-issue that this law was still on the books because charges for wearing a mask “wouldn’t hold up in court.” In other words, these idiots are OK with police using an obsolete law to target people for exercising their civil rights or merely because they need to meet their quota) because they think the disruption of being arrested and subsequently having an arrest record, taking the time off work to go to court, and representing or paying someone to represent you against a potentially life-altering felony charge (for having a f-ing mask!) is no imposition so long as it’s not likely to hold up in court.  The remedy for bad and unnecessary laws is repealing them, not leaving them intact as tools for police and prosecutors to jam people up simply because they feel like it.

1.7k
SHARES
FacebookTwitterGoogleRedditTumblr
DiggLinkedinStumbleuponMailPrint
You Can Support Cop Block by shoppping on Amazon using the banner below:
BANNERS ARE CLICKABLE