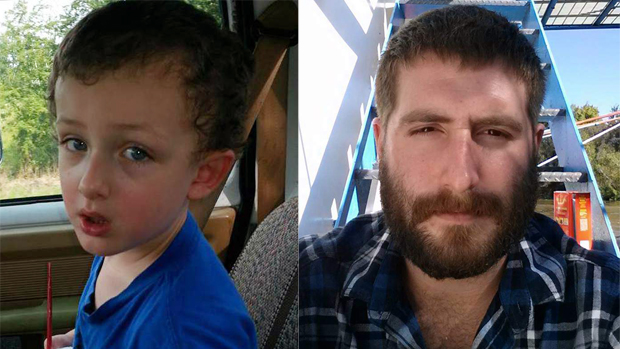 A six-year-old boy is dead after police shot him multiple times while pursuing his father for a warrant Tuesday night in Louisiana.

Marksville police say the boy’s father, Chris Few, tried to back up into one of their patrol cars after they had cornered him in a dead end.

So they opened fire through the drivers side window, killing the boy and injuring the father.

Jeremy Mardis, a first-grader at Lafargue Elementary, was shot multiple times in the head and torso.
Jeremy Mardis, a six-year-old first-grader, was shot by police trying to kill his father.
Few was transported to a hospital with a gunshot wound to his head. He is listed in stable condition.

Police say they pulled Few over around 9:30 p.m. and discovered he had warrants. They said Few drove off, initiating a high speed chase and eventually reached a dead end road. That was when he began reversing his vehicle, prompting Marksville police, who call themselves city marshals, to open fire.

The investigation was taken over by Louisiana State Police, whose spokesman, Daniel Moreau, stated the following in a Facebook post Wednesday morning:

“The state police indicated the preliminary investigation showed the marshals discharged their duty weapons at a vehicle at the conclusion of a pursuit.”

But Moreau later recanted his comments saying that it couldn’t be specified who fired the shots.

However, only one law enforcement agency was pursuing Few. And there has been no indication that Few had a gun.

Also, the current investigation shows that all shots were fired into the vehicle from the outside.

Details on Few’s warrant have not been released.

PINAC reported on a South Carolina case, where a teenage man tried to evade officers in his vehicle, and was shot and killed by officers. The officers claimed the teen was trying to hit them with his vehicle. The video refutes that.

Nevertheless, that officer was cleared of any wrongdoing.