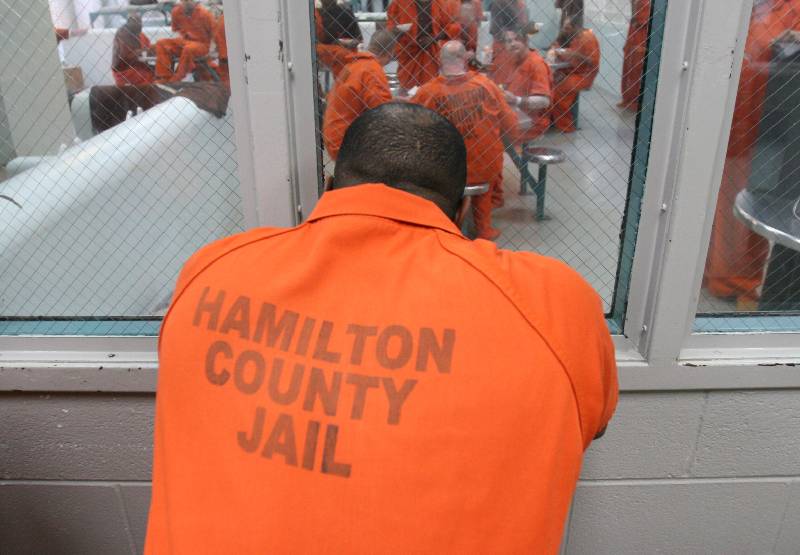 I spent 6 days in jail from October 25th through to the following Sunday night, October 1st. Ademo and I were arrested after we chalked the Noblesville police station for the second time out of protest of the warrants they issued for our arrest. These warrants placed us under the constant threat that armed men would take us to cages if we did not return to the state of Indiana or if we were caught somewhere in the ‘free’ world.

I was transported to the jail in the back of a cruiser just like every other criminal. While on the way there I had conversation with the cop who was transporting me about offering his services directly to the customer. He had been a cop for 5 years (if I remember correctly) and when I asked him what his best policing skill was he described himself as a “jack of all trades.”

I asked him if he thought he would be better off offering his services directly to the consumer? He didn’t quite understand and I elaborated by describing a company that could provide protection services directly to the customer – like all other businesses outside of government control. For example, if you need theft prevention and recovery a business would provide a detective who is good at finding stolen property. If you need someone to check on your home or business while you are out of town, someone can drive by and look for signs of forced entry. Who knows maybe you even want to hire a bodyguard to keep you safe. If they have someone or a team of people with those skills you can hire them as well.

All in all paying for the services you require from a company with an incentive (collecting the payday) to provide quality services, as opposed to being forced to fund an established monopoly that has no competition and therefore no market incentive, is far better because even if they fail to provide that service, you’ll be under no obligation to pay the bill for services NOT rendered (or outside the scope of your contract). And not many businesses can survive without income (like not one single business). Nevertheless, my words fell on deaf ears that night and I can only hope that I planted a seed.

After our little ride in the cop car I was brought into the first interview area and waited while the cop did some “administrative stuff” on the computer. A few minutes later Ademo was brought in and we joked that I had just about convinced the cop who provided me with a taxi ride, courtesy of the Bernie Sanders express, to quit his job and open his own private police force.

We talked a bit but the cop who drove me to the jail wanted to ask me questions. Normally I would not be talking to the police, especially if I am under arrest, or the only things I would say are, “Am I being detained or am I free to go?” I would also recommend not answering any questions without a lawyer present (remember anything you say can and will be used against you) especially if actually guilty. Yet, that wasn’t my case and he asked me about that night’s chalking. I told him everything I wrote, as well as, all of the colors I wrote it in because I knew what he was getting at. Then he asked me if I had written anything in chalk paint? I told him there was no such thing. It was either chalk or paint (and Ademo and I burst into laughter). There’s not really a happy medium. At the end he asked me if I wanted to add anything to it. I told him “I took personal offense to the fact the people who swore to protect my freedom of speech were now caging me for it” and into the jail we went.

While I got processed I asked the sheriff’s manning the booking station how they felt knowing that their boss was trillions of dollars in debt? They didn’t have an answer for me. I asked how they felt knowing the facility was going to be used to house people who write with chalk? Again, no answer. All in all they were just doing their jobs and following their orders. They gave me the impression that they gave little to no thought about the individuals who made up the population of their facility.

They frisked me, took my sweatshirt and ran me through a body scanner (that was a new experience for me) then they dropped me off in the holding tank. The holding area was cold, loud and they never turned off the lights. It was impossible to sleep, it was hard to talk due to everything, no matter how loud, echoing back. Even if you could doze off for a minute or two the second someone opened/closed a door or flushed a toilet you woke up.

One of the guys in holding was assigned to my cell block later. He got booked before me but moved to the medical ward due to illness. He showed up a couple days later, but was bailed out shortly after. He was in for only paying a potion of his child support. It was sad that a guy who is already struggling to make ends meet is then thrown into a cage because he can’t make ends meet, further inhibiting his ability to make ends meet. Last I checked cages weren’t built for the poor, nor were they the fast track to any form of employment.

Another dude who got out that night was in jail for being 5 minutes late to court. They put a warrant out and when he walked into court they arrested him for failure to appear. It didn’t make any sense that after he appeared, even though 5 minutes late, they still arrested him for failure to appear. Who knows maybe he got held up in the lobby? Last I checked cages weren’t built for the tardy either.

The third man in the holding tank had been booked over some MDMA that was found in his car during a search. He said the cops claimed to smell cannabis and searched his vehicle. The search didn’t produce any marijuana but they did find a single MDMA pill. He said a friend forgot it the night before. Whatever the reason cages weren’t built for recreational drug users.

During the time in holding they photographed my face, tattoos, and took prints of my fingers and hands. All of this is standard procedure but there’s nothing standard about it – it’s kinda creepy in fact. Eventually (hours later) I was told to shower and change into the jail uniform. For me it was tan scrub like bottoms, and a yellow t-shirt that had the word inmate on the back and my inmate number. Ademo was wearing the same tan pants but had an orange top to signify that he was a medium security inmate (yellow was minimum security).

We were shuffled through the halls in a single file line, given our sleeping mats, a tub of toiletries, as well as, our commissary starter kits (if you are going to be doing some time, and these are an option to purchase, I would suggest getting at least one). After that they placed us into our respective cell blocks where Ademo and I were going to be spending the foreseeable future…

Stay tuned for the next episode of Brian’s Hamilton County jail blog and get caught up on Ademo’s and my Chalking Case by clicking here.