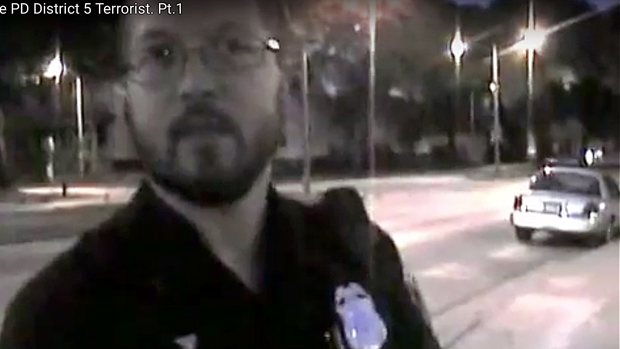 Claiming their precinct had come under recent terrorist threats and destructive acts of vandalism, a group of Milwaukee police officers surrounded a man standing outside their building with a camera, telling him they had the right to detain him for a warrant check for “safety reasons.”

“In light of things that have happened recently, it just kind of raises our suspicion,” said a cop who identified himself as “Officer Miller.”

“I have no malicious intent,” assured the videographer, who goes by Superrick568 on YouTube.

“We just kind have to make sure because you never know, people are doing some crazy things nowadays,” Miller said.

“I’m not one of them at all,” Superrick568 said, but that was not enough to assure the cop, who was quickly joined by seven more officers, who then surrounded the videographer.

Officer Miller asked for his identification, which he refused to provide on the basis that he was doing nothing more than standing on a public sidewalk video recording.

One commandeering officer identified as Webber kept placing his hand in front of the lens, claiming his camera could be a “facsimile firearm,” which apparently don’t carry enough firepower to penetrate a human hand.

“What you have to understand is we’ve had people come in here and bust out every window of our squad car,” Webber claimed. “We’ve had people follow officers home.”

“We have had a terrorist threat within the last month, somebody threatened to blow up this district.”

Webber went on to say that they were going to conduct a “field interview,” which apparently is cop lingo for an illegal detainment.

It was the usual textbook cop bullshit where they knowingly lie to a citizen.

Webber kept referring to the previous threats to their district, but we have reached out to the police department to get more details on these alleged incidents, and have not heard back.

We’ve also searched for any press releases or news reports about these incidents – which is something they surely would have capitalized on to bolster the Police PR Spin Machine – but have found nothing.

Instead, we came across an article where Milwaukee Police Chief Ed Flynn was interviewed on Fox and Friends about the shooting death of an Illinois police officer in September.

“Every cop in America is looking over their shoulder right now. There`s no doubt about it. They don`t believe America has got their back,” Chief Flynn said.

But the shooting death of the Illinois cop was most likely a suicide, except the Lake Forest Police Department refuse to confirm it because they initially played the death up to the fictionalized War on Cops.

The paranoia ran deep during the 20-minute detainment, but Superrick568 never gave up his identification.

The cops only allowed him to be on his way after they stuck a camera in his face and photographed him.

At one point during the detainment, he asked how long ago did someone break out all the windows of their patrol cars.

“Not very long ago,” a cop responded. “I don’t remember exactly but it’s happened several times.”

In the video, Superrick568 said they tried to follow him to his car to get his license plate number, but he said he did not allow it to happen.

But that incident will be detailed in part 2 of his experience that night, which he has yet to post.

Also below is another video where he was questioned and asked for identification for recording outside a police building.