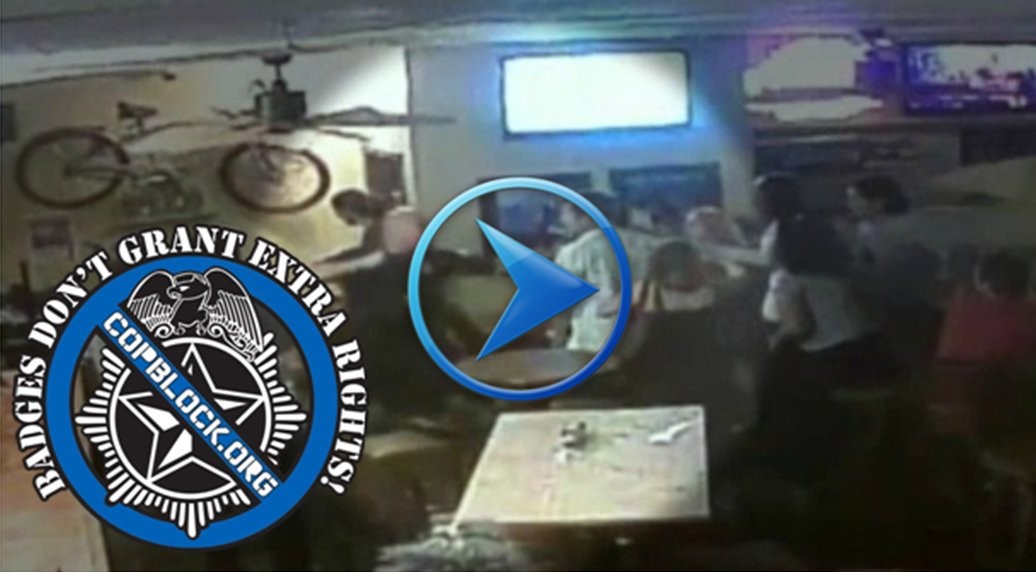 Video has surfaced showing an Oceanside, California police officer punching a man in the face and breaking his ribs with a baton after charging into a bar and nearly knocking over his wife.

The incident occurred on the night of Sep. 26 as patrons were imbibing at Tony’s Sports Bar and Grill on the Oceanside Harbor. Police were called to the area outside the establishment after two men got into an altercation and broke a window at a nearby shop.

Police reports say witnesses had claimed one of the men had gone inside Tony’s. Surveillance footage from inside the bar shows responding officer Michael Sabino talking to a handful of people in the bar before a man in a black shirt begins arguing with him.

Sabino can be seen quickly moving around a table and begins wrestling with the man in an attempt to take him to the ground. As he struggles, Officer Nicholas Nunez comes bounding in through the back door.

On his way in to aid Sabino, Nunez can be seen bumping into patrons, including Chris Vadnais’ wife Dana. In response, Chris can be seen tapping the officer on the arm – and according to his lawyer – said, “hey, you knocked my wife down.”

That’s when Nunez turns around and clocks the man in the face.

“[The officer] knocked him to the ground,” Chris’ attorney, Keith Rutman said. “Chris got up, was justifiably enraged, but restrained. The officer turned around and saw that Chris had gotten up and was mad and took him down again, hit him with his nightstick, and broke, fractured two ribs.”

Both Chris and his wife were arrested, but neither were formally charged with a crime.

Oceanside police maintain they have launched an internal investigation to review the incident and say they are still interviewing more than 20 witnesses that observed what transpired.

“I’m not saying this officer is a bully or a violent person. I don’t know the man,” Rutman said. “I’m not passing any judgment on him, but if he made a mistake in the way he acted towards my clients, the law says they’re entitled to redress.”

The attorney says he is in communication with city prosecutors but that no legal action against Nunez or the department has been filed yet. Officers Sabino and Nunez remain on full duty.