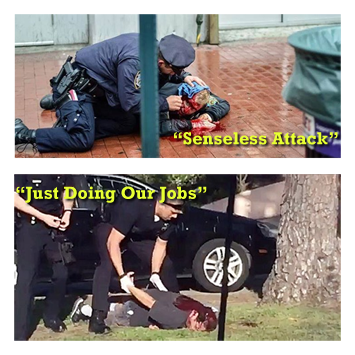 This photo was shared on a police Facebook page (that I am not sending any traffic to) the other day, along with the following text: “Sometimes it bothers me when people i (sic)know say how much they dislike cops, how most cops are assholes and how we get away with so much. Then I remind myself their hatred and ignorance is a measure of our success. They have no idea what a terrible world lays in wait outside their doorsteps, because we keep the terrible away. They sleep safely in their beds because we’re awake in places they’d never want to be. We have so far removed them from the realities of what we see and who we deal with, they live clueless, blissful lives thinking we’re the problem. If we’re your biggest gripe at the end of the day, then we’ve done our job. We’ve kept the bad guys you don’t think exist from taking everything you have. We’re willing to give up everything we have – up to and including our lives – for you, regardless of how unaware and unappreciative you are. So thank you for the occasional unsupportive comments and snide remarks about an occupation you know nothing about. It shows how relatively crime free your life is, a service my brothers and sisters will continue to provide in spite of your attitude.”

I could barely get through that steaming pile of self-congratulatory BS without gagging. The only reason I even looked at the post was because I was struck by how similar the photograph (of NYPD Officer Kenneth Healey who survived a hatchet attack by a muslim extremist) was to the one below of Walter DeLeon, the man who was left horribly disfigured, partially blind and deaf,  and paralyzed after LAPD cops literally blew half his head off when he flagged them down in June. Not only did they nearly kill this man for nothing, they rolled over his critically wounded body, perhaps causing further injury, to handcuff him as his brains seeped into the grass.

While cops are always quick to credit their militarized and broken windows policing for the near-record low levels of crime that we have been experiencing for years now, criminologists have not been able to definitively identify what’s really responsible. They do agree that there are many factors at play here, though.

“It could be that we have less crime now not because of any brilliant anti-crime initiatives dreamed up by academics and politicians but because civil society has quietly churned out benefits independent of those policies. Maybe the real lesson of the last two decades is that anti-crime policies at best have little effect on the crime rate. When you factor in the drug war, they may make it worse.”

An article on PoliceOne.com unintentionally illustrates that police recognize their tactics are harmful and wrong…at least when it comes to people they relate to. Kansas City, Missouri cop, Octavio “Chato” Villalobos shares an epiphany he had about his work [emphasis mine]:

“I went in with a good heart and came out with a cop brain,” he said in Memphis Tuesday during a workshop aimed at strengthening relationships between Latinos and law enforcement. “I used my Spanish to arrest people, because that’s how I’m going to be a good cop … I had to prove that I was a good officer by their standards.”

After a few years, he wanted to work in the neighborhood he grew up in. He had great arrest numbers and even worked as a homicide detective. But he realized that wasn’t the way to police his community. Villalobos explained that community policing and target-oriented policing works better in communities of color because police officers need to engage the community to become “partners in fighting crime and not an occupying force.”

The article doesn’t really delve into when it is appropriate for police to be an occupying force.

I’m not going to cover how police routinely engage in criminal activity on the job. Just read 5 random articles on this site for an idea of that. Cops also legally victimize the communities they are sworn to serve through practices like abusive ticketing schemes and civil asset forfeiture. One especially parasitic city in Missouri relentlessly tickets its residents for petty offenses such as having mismatched window coverings, cosmetic cracks in their sidewalks, and walking on the left side of a crosswalk. I can already hear the cop apologists bleating that cops don’t make the laws. No, they just sign up to enforce them, and directly benefit from the ill-gotten funds that come from their tickets. Noting this does not in any way negate the guilt of the crooked court and government officials in Pagedale, Mo.

Police across the nation have demonstrated they have an appalling willingness to end the lives and liberty of innocent citizens without cause, and often without provocation. See Larken Rose’s article for an excellent discussion of how the notion that “police lives matter more” infects everything cops do. Some examples of how this works out for citizens are below.

Rather than cops doing shooting at cars out of legitimate safety concerns, it’s become clear that many police officers are using “he’s coming right for us” as blanket permission for murder.

In 2014 the U.S. Border Patrol banned agents from shooting at moving vehicles after a review found they were intentionally jumping in front of fleeing cars to justify shooting and killing their occupants. It’s a pattern we’ve seen elsewhere:

Notice how Lt. Mark Tiller tears through the parking lot in this video, recklessly going around a blind corner in the parking lot of a fast food restaurant where you would expect pedestrians to be present. Tiller was a danger to everyone in the area the night he killed Zachary Hammond.

Just this week we witnessed another horrific incident of cops shooting at fleeing cars when city marshals in Louisiana killed 6-year-old Jeremy Mardis as he sat in his father’s car on Tuesday. At first, police claimed that Jeremy’s father had tried to reverse over the marshals at the end of a car chase, and that they were not sure whether the bullets that struck the child multiple times in the head had come from inside or outside of the car. Interesting considering that the marshals involved had still not been interviewed as of Thursday night, and there was no gun in the car. (Update: Two of the marshals have now been charged with murder.)

Police narrowly avoided killing an infant in an earlier high-profile incident in Washington, DC. In 2014, Miriam Carey was killed by US Capitol Police and Secret Service agents who pursued her after she made a U-turn out of a security checkpoint. Police fired 26 bullets at Carey’s vehicle, striking her 5 times. It’s never been disclosed if the cops who had come close enough to see inside the vehicle the multiple times it came to a stop during the incident ever saw Carey’s 13-month-old daughter in the back seat before firing into the car.

We do, however, know their policies about firing at moving vehicles:

A Capitol Police order dated 1989 barred shooting at moving vehicles except to defend against an attack that could cause death or serious injury; or to prevent the escape of a person whom the officer has witnessed commit a felony. A former Capitol Police officer says those principles were still in effect as of several years ago. A 2004 Department of Homeland Security memo to the Secret Service and other enforcement agencies within DHS said “deadly force may not be used solely to prevent the escape of a fleeing suspect.”

Additionally, a prominent law enforcement organization, the Police Executive Research Forum has been urging police to ban shooting at or from moving vehicles for years.  If police departments truly care about preserving life and encouraging their officers to behave responsibly, why don’t they do this?

While cops give themselves carte blanche to kill us in our cars, they also terrorize us in our homes. I’ve written previously about the scourge of no-knock raids and the danger they pose to both police and citizens. It’s already outrageous that these dynamic entry raids are acceptable to use against non-violent low level drug offenders; It’s inexcusable once you see how often police conduct these raids on the wrong address or on false or incorrect information:

Some of the tragic incidents we see are honest mistakes rather than intentional malice or careless negligence, but even then cops demand that their own mistakes be held above reproach while allowing zero margin of error for citizens who find themselves in stressful potentially life and death situations with law enforcement. In fact, they, and lawmakers, expect regular citizens to somehow have the superhuman awareness to know that they are dealing with law enforcement even when cops are in plainclothes and haven’t properly identified themselves:

In short, cops routinely fleece poor people, terrorize and kill innocent citizens, and demand ultimate authority over us while rejecting any accountability for their actions, and then delude themselves about why some of us don’t thank them for their service.