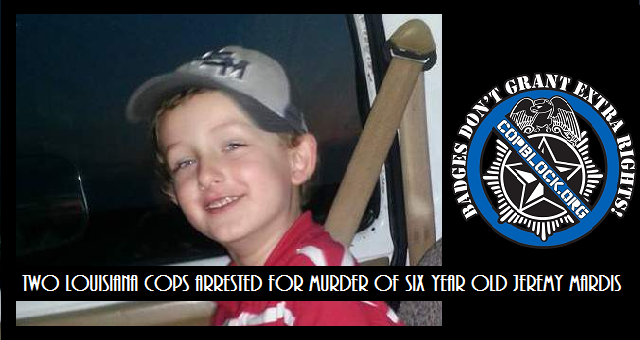 Earlier today we reported on the incident, which happened on Tuesday. Officers pursuing Chris Few regarding a warrant fired into his vehicle, which also was occupied by the man’s six year old son. Both occupants were hit, and the child died from the injuries on the scene.

The two officers involved were initially cleared of wrongdoing in the incident, which happened in Marksville, Lousiana.  Chris Few was not armed and it is not known why officers fired upon him, considering that he presented no immediate danger to officers or fellow citizens.

“Jeremy Mardis, 6 years old; he didn’t deserve to die like that,” Louisiana State Police Col. Michael Edmonson said of the incident which left the child with five bullets in his lifeless body.

His father is still in the hospital.It is not known whether the officers knew there was a child present when they tried to murder his father. There has been a lot of buzz and outrage regarding the killing which likely forced authorities into the rare position of charging their own with their crimes. What do you think, is the momentum for justice in police killings starting to catch up to cops, or is this just an incident to placate the public who are becoming fed up with the ever-increasing number of killings by law enforcement?