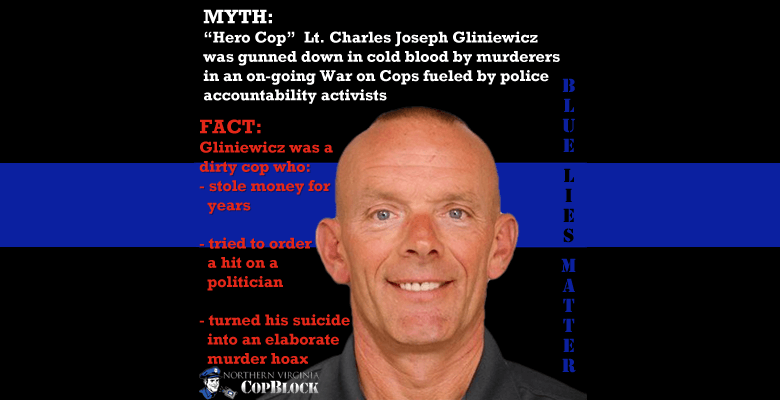 After months of speculation, the ugly truth about Lieutenant Joseph “GI Joe” Gliniewicz has come pouring out. The hero millions mourned nationally as a “War on Cops” martyr murdered by unknown assailants who were alleged to be affiliated with the police accountability movement has turned out to be:

By the time this investigation is finished, it will probably be easier to list the crimes Gliniewicz hasn’t committed. That list gets shorter with each new report. What we now know is that Gliniewicz had been embezzling from the department’s explorer program for years, had cocaine packets in his desk, and attempted to arrange a murder-for-hire on a city administrator to prevent her from discovering his theft. We also know the grieving widow who was promised to receive 75% of Gliniewicz’s salary for the rest of her life (which may still happen) is one of the people Gliniewicz exchanged incriminating texts messages with regarding his embezzlement and assassination plot. His son is believed to have entered into a sham marriage with Gliniewicz’s mistress that “GI Joe” arranged to get increased benefit payments from the Army. His wife and son are currently under criminal investigation.

This elaborate hoax had Fox Lake, Illinois on lockdown as police conducted an intense manhunt for two white men and one black man who were actually in the area at the time of the suicide, and who investigators now think Gliniewicz likely spotted and then deliberately tried to set up as the fall guys for his final crime. In fact, these three men were taken into custody and questioned, and could easily have found themselves sitting in prison if they hadn’t had an alibi from a restaurant. That Gliniewicz was willing to send three innocent people to prison to save his reputation shows the depth of his depraved indifference to others. Who knows how many people he might have set up over the course of his long career?

What’s more, city officials and those looking into his death knew Gliniewicz was no hero at the outset, but they still deceived and manipulated the public with a War on Cops false narrative, lowered flags, and a funeral procession that again shut down Fox Lake streets. An Illinois news station obtained a copy of Gliniewicz’s personal file through a freedom of information request.

The file portrays him as a chronic womanizer who enjoyed sexual harassment and a chronic drunk. He was also labeled as a brutalizer of suspects and co-workers and someone who misused police department resources.

A 2009 letter from Gliniewicz’s fellow officers to the village mayor included bullet points of his wrongdoing – some allegedly criminal – including:

Even though his fellow officers said they could “no longer stand by and watch Lt. Gliniewicz violate the rules and regulations, policies and procedures, and state statute, and remain silent,” nothing was done.

Buried after numerous commendations, the file contains many incidents of absenteeism and tardiness, reprimands for negligent and substandard work (and even one for not making his ticket quota), and incidents where coworkers accused Gliniewicz of making overt and implied threats of bodily harm. There is also this remarkable incident of public intoxication. Right now police apologists are reeling from this news,feeling at least some of the sting we all felt when we realized “protect and serve” wasn’t worth the paper it’s written on. Perhaps some of them may have even permanently woken up from their sweet statist slumber, finally realizing that they may be as wrong about the fundamental truths about policing as they were about the character of this police officer.

At any rate, this story would make one hell of a movie. I think someone should pitch it to Quentin Tarantino for his next project.