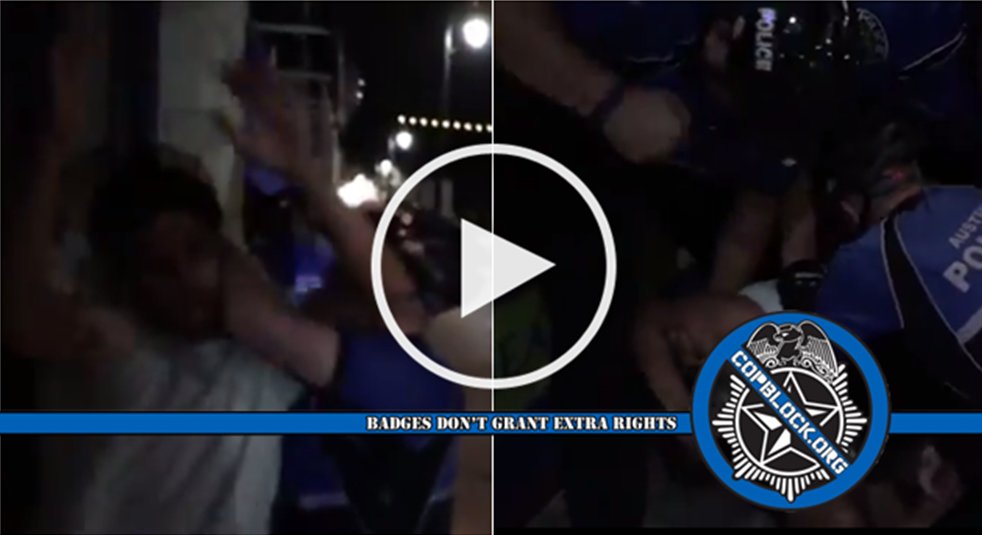 Video has emerged showing Austin, Texas police officers shoving, punching, and kneeing two nefarious jaywalkers before arresting them – and then also arresting a female bystander who was protesting their actions.

The footage, which was posted on Facebook on Friday, shows the gang of thugs pushing two men up against a wall along 6th street in Austin as the “suspects” and dumbfounded onlookers scream, “What the fuck!?”

Like brain-dead automatons being driven by some force outside of themselves, the officers can be seen brutalizing the men with punches and knee strikes as they tell them to “get on the ground.”

One of the men has been identified as 22-year-old Jeremy King, who had come to the city from San Antonio to attend a music festival.

Jeremy says he and his friends had crossed the street before being given a walk signal, and when the cops approached, made the mistake of uttering an insult under their breath.

Apparently that’s all the officers needed for an excuse to pounce like a pack of hyenas onto their unsuspecting prey.

“What are y’all gonna do with him?” the female bystander asks the officers after they cuff and gain control of one of the men.

“Take him to jail,” an officer responds.

“For what? What did he do?” the woman pleads. “What crime did he commit?”

“Crossing against the light,” the cop unbelievably says.

The footage then shows some of the cops slam another man face down in the street before the woman is also handcuffed and detained while condemning their actions.

The man who recorded the footage, Rolando Ramiro, says the incident occurred after the group crossed a street that was barricaded making it impossible for any traffic to be on it.

He says the walking light changed as they were crossing, prompting the officers to demand their IDs and accuse them of jaywalking – despite the street being cordoned off.

Apparently the under the breath “insult” described by Jeremy was one of the men responding to the order to provide their papers to the officers with a “Fuck no,” as he pointed out that the street was barricaded with no traffic – according to Ramiro.

Austin police have offered few details about the arrests but said they have launched an internal investigation to evaluate what transpired.

“As is standard protocol, the Chain of Command will review the Response to Resistance and the incident to determine what led up to the events captured in the video and whether the officer’s actions were in compliance with APD policy,” a statement said.