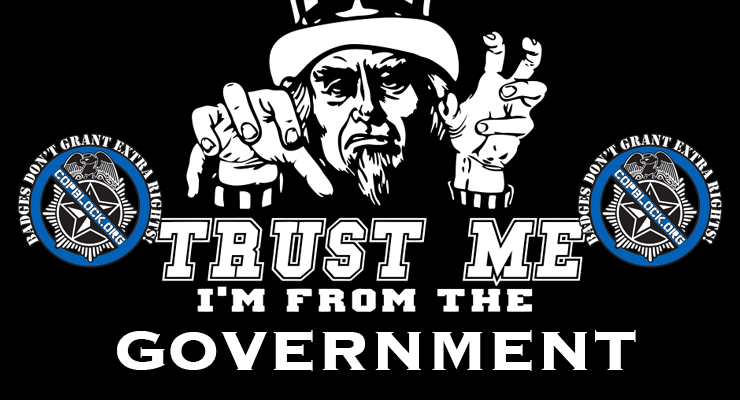 *Authors Note* This article was published over a year ago. I ran across it while researching another post I am currently working on. After reading it, I felt compelled to share it. It was shocking to me that this advice is provided to make sure that you survived a police encounter. The fact that it is coming from the mouth of a 17 year police veteran, has me thinking that we should take a closer look at the mindset of a policeman.

After all arguing, insulting, and threatening to sue are not viable reasons for people regardless of their job title to assault, or kill you. When you are authorized to discern and enforce right and wrong, you should prepare yourself to be under a microscope and be used having your actions questioned regularly by the people who you are entrusted to protect.  In fact, the very institution of law enforcement should be constantly questioned absolutely in an attempt to find efficient and effective ways to remove and replace it.

When blind faith and trust in organizations are perceived as the norm, it doesn’t take long for a shroud of secrecy to eclipse any transparency that existed.

Sunil Dutta, Ph.D., is a 17-year-veteran police officer in Los Angeles. His book, “Blood Lines: the Imperial Roots of Terrorism in South Asia,” will be released in February, 2015. These are his personal opinions.

A teenager is fatally shot by a police officer; the police are accused of being bloodthirsty, trigger-happy murderers; riots erupt. This, we are led to believe, is the way of things in America.

It is also a terrible calumny; cops are not murderers. No officer goes out in the field wishing to shoot anyone, armed or unarmed. And while they’re unlikely to defend it quite as loudly during a time of national angst like this one, people who work in law enforcement know they are legally vested with the authority to detain suspects — an authority that must sometimes be enforced. Regardless of what happened with Mike Brown, in the overwhelming majority of cases it is not the cops, but the people they stop, who can prevent detentions from turning into tragedies.

Here is the bottom line: if you don’t want to get shot, tased, pepper-sprayed, struck with a baton or thrown to the ground, just do what I tell you.

Working the street, I can’t even count how many times I withstood curses, screaming tantrums, aggressive and menacing encroachments on my safety zone, and outright challenges to my authority. In the vast majority of such encounters, I was able to peacefully resolve the situation without using force.

Cops deploy their training and their intuition creatively, and I wielded every trick in my arsenal, including verbal judo, humor, warnings and ostentatious displays of the lethal (and nonlethal) hardware resting in my duty belt. One time, for instance, my partner and I faced a belligerent man who had doused his car with gallons of gas and was about to create a firebomb at a busy mall filled with holiday shoppers. The potential for serious harm to the bystanders would have justified deadly force. Instead, I distracted him with a hook about his family and loved ones, and he disengaged without hurting anyone. Every day cops show similar restraint and resolve incidents that could easily end up in serious injuries or worse.

Sometimes, though, no amount of persuasion or warnings work on a belligerent person; that’s when cops have to use force, and the results can be tragic. We are still learning what transpired between Officer Darren Wilson and Brown, but in most cases it’s less ambiguous — and officers are rarely at fault. When they use force, they are defending their, or the public’s, safety.

Even though it might sound harsh and impolitic, here is the bottom line: if you don’t want to get shot, tased, pepper-sprayed, struck with a baton or thrown to the ground, just do what I tell you. Don’t argue with me, don’t call me names, don’t tell me that I can’t stop you, don’t say I’m a racist pig, don’t threaten that you’ll sue me and take away my badge. Don’t scream at me that you pay my salary, and don’t even think of aggressively walking towards me. Most field stops are complete in minutes. How difficult is it to cooperate for that long?

I know it is scary for people to be stopped by cops. I also understand the anger and frustration if people believe they have been stopped unjustly or without a reason. I am aware that corrupt and bully cops exist. When it comes to police misconduct, I side with the ACLU: Having worked as an internal affairs investigator, I know that some officers engage in unprofessional and arrogant behavior; sometimes they behave like criminals themselves. I also believe every cop should use a body camera to record interactions with the community at all times. Every police car should have a video recorder. (This will prevent a situation like Mike Brown’s shooting, about which conflicting and self-serving statements allow people to believe what they want.) And you don’t have to submit to an illegal stop or search. You can refuse consent to search your car or home if there’s no warrant (though a pat-down is still allowed if there is cause for suspicion). Always ask the officer whether you are under detention or are free to leave. Unless the officer has a legal basis to stop and search you, he or she must let you go. Finally, cops are legally prohibited from using excessive force: The moment a suspect submits and stops resisting, the officers must cease use of force.

But if you believe (or know) that the cop stopping you is violating your rights or is acting like a bully, I guarantee that the situation will not become easier if you show your anger and resentment. Worse, initiating a physical confrontation is a sure recipe for getting hurt. Police are legally permitted to use deadly force when they assess a serious threat to their or someone else’s life. Save your anger for later, and channel it appropriately. Do what the officer tells you to and it will end safely for both of you. We have a justice system in which you are presumed innocent; if a cop can do his or her job unmolested, that system can run its course. Later, you can ask for a supervisor, lodge a complaint or contact civil rights organizations if you believe your rights were violated. Feel free to sue the police! Just don’t challenge a cop during a stop.

An average person cannot comprehend the risks and has no true understanding of a cop’s job. Hollywood and television stereotypes of the police are cartoons in which fearless super cops singlehandedly defeat dozens of thugs, shooting guns out of their hands. Real life is different. An average cop is always concerned with his or her safety and tries to control every encounter. That is how we are trained. While most citizens are courteous and law abiding, the subset of people we generally interact with everyday are not the genteel types. You don’t know what is in my mind when I stop you. Did I just get a radio call of a shooting moments ago? Am I looking for a murderer or an armed fugitive? For you, this might be a “simple” traffic stop, for me each traffic stop is a potentially dangerous encounter. Show some empathy for an officer’s safety concerns. Don’t make our job more difficult than it already is.

DON’T ARGUE WITH ME, DON’T CALL ME NAMES, DON’T TELL ME THAT I CAN’T STOP YOU, DON’T SAY I’M A RACIST PIG, DON’T THREATEN THAT YOU’LL SUE ME AND TAKE AWAY MY BADGE. DON’T SCREAM AT ME THAT YOU PAY MY SALARY, AND DON’T EVEN THINK OF AGGRESSIVELY WALKING TOWARDS ME.

Community members deserve courtesy, respect and professionalism from their officers. Every person stopped by a cop should feel safe instead of feeling that their wellbeing is in jeopardy. Shouldn’t the community members extend the same courtesy to their officers and project that the officer’s safety is not threatened by their actions?

*Authors note* I wanted to bust this wide open and rip open the statements full of logical fallacies and victim blaming as there are many. Hopefully you will comment your opinion on what part of this advice was the worst. Read more of my work from my personal blog and other websites. Fresno Peoples Media author page