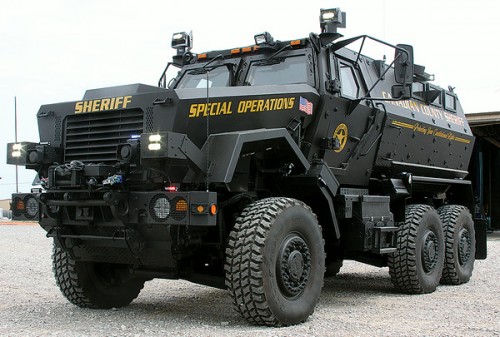 Vermont’s Burlington Police department announced they will be withdrawing from the Pentagon’s questionable 1033 military surplus program. This will mark the first time a police department has ever willfully withdrawn from the Department of Defense’s (DOD) federal program, according to the NY Daily news.

The controversial program is responsible for the militarization of local police departments across the United States, often arming them with left over equipment including advanced surveillance technology, MRAP’s, grenade launchers, tanks and numerous other left over war accessories.

The Burlington Police Department’s official statement over their separation with the DOD’s 1033 program voices their concerns over the warlike training and gear:

“The militarization of local police departments is a genuine concern in our nation,” said Burlington Chief of Police Brandon del Pozo. “There are times when military-style equipment is essential for public safety, but they are very rare.  Between our partners in the Vermont State Police and the Vermont National Guard, as well as the other federal and local agencies the Burlington Police Department partners with, we have the resources to handle all but the most inconceivable public safety scenarios.  Amassing a worst-case scenario arsenal of military equipment results in officers seeing everyday police work through a military lens. When I realized what a small role the military played in equipping our police, I concluded it was better to return the items and let our 1033 Program memorandum of understanding expire.”

Mayor of Burlington, Miro Weinberger praised del Pozo’s decision encouraging police departments to avoid use of military equipment, “Today’s announcement cements the Burlington Police Department’s long-standing practice of avoiding the use of military equipment, in contrast to many other police departments. Our focus instead is on the basics of good policing in the 21st century: foot patrols, strong relationships between the officers and the community, and the use of modern tools to increase public transparency and police effectiveness.”

The Burlington PD reaffirmed residents that they have “no plans to acquire tactical or military items beyond the types of conventional policing equipment it already possesses.”

Will other local police departments begin to sever ties with the Pentagon’s 1033 military surplus program?

2.4k
SHARES
FacebookTwitterGoogleRedditTumblr
DiggLinkedinStumbleuponMailPrint
You Can Support Cop Block by shoppping on Amazon using the banner below:
BANNERS ARE CLICKABLE