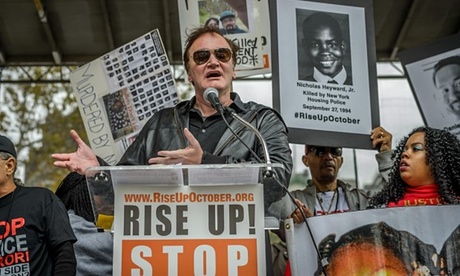 An online pledge at Change.org was created to support QuentinTarantino against tactics of the Fraternal Order of Police. Recently they have called for a national boycott of “The Hateful Eight” directed by Quentin Tarantino because of his comments about Tamir Rice and several other victims of police violence at a New York rally in October. This is an excellent way to send a message to the FOP from the people. We need more people in the public view to bring awareness to the issues of police brutality and racism within the system. One must consider the implications of boycott and what exactly they stand to gain from it. I think the answer is silence.

Here is what made the police so upset:

“I’m a human being with a conscience,” said Tarantino to protesters, according to the New York Post. “And if you believe there’s murder going on, then you need to rise up and stand up against it. I’m here to say I’m on the side of the murdered. When I see murders, I do not stand by … I have to call a murder a murder and I have to call the murderers the murderers.”

This is his response to the boycott:

“They’re implying that I meant that all cops are murderers, and I wasn’t. But the thing that’s really sad about it is we actually do need to talk to cops about this. We need to get to the problem. We need to bring this to the table.”It is obvious that Quentin doesn’t hate all cops, he has an issue with the institution.

Support Tarantino and the voice of other celebrities and stand up to bullies. Sign the pledge HERE.