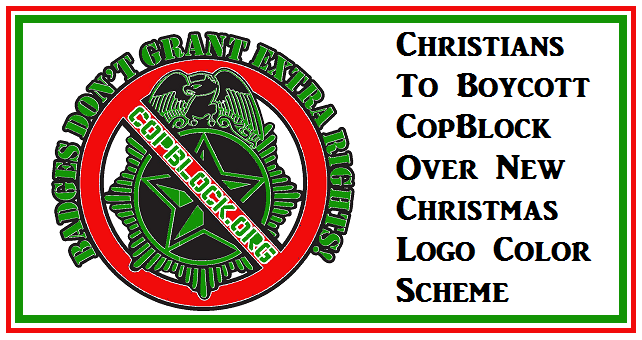 One day while high on pepper sauce and brick cleaner, I decided to digitally deconstruct and reimagine the CopBlock.org logo, a design based upon the Keene, NH Police Department badge, which is the central location of the Free State Project. I did not do an exceptionally great job with all of the designs, as I was more concerned with variety and the tedious process of ‘safely’ ingesting industrial solvents for enjoyment and enlightenment.

The image sat in my ever-growing nest egg of questionable image files until I recently uploaded some of them to an image storage website. I woke up the other morning to a number of angry comments in my email related to the Christmas themed CopBlock.org image.

“Dear CopBlockDunce,
I find this image to be a cultural appropriation of Christian aesthetics made and shared without tact or respect. While the Lord had guided me to your organization in the wake of so much needless death and suffering, I will now be petitioning fellow Christians to boycott your organization, as the co-opting of Christmas symbols without reference to Christ is just another mortar in the war against Christians.”

There were dozens of more letters just like this one. Without knowing it, I had set off a shitstorm of Abrahamic rage. They kept pouring in.

“Satan’s Graphic Designer,
If you truly want the Army of Christ to support your cause, you will cease from adding to the meaningless theft of Christ’s birth by refusing to connoiter the design elements that symbolize his glory. Red and green is for the God-fearing, not fun and games.”

Perplexed as I was, I could not forget what a simmering pot of insanity the world had recently become. Since all women are into women, everybody is actually a vegan and Christians tried to get the Shroud of Turin to become the new flag image, I thought the recent craziness might slow awhile. But I guess not.

So now, despite a long interfaith relationship with all critics of the police state, our visual tactics are coming under fire from a religious group that largely supported us.

On behalf of CopBlock.org I would like to apologize for the tasteless acts of image manipulation I participated in. If I would have know that it was going to interfere with a social paradigm that promotes mindless consumer materialism and revolves around lying to children, I would have been far more harsh.