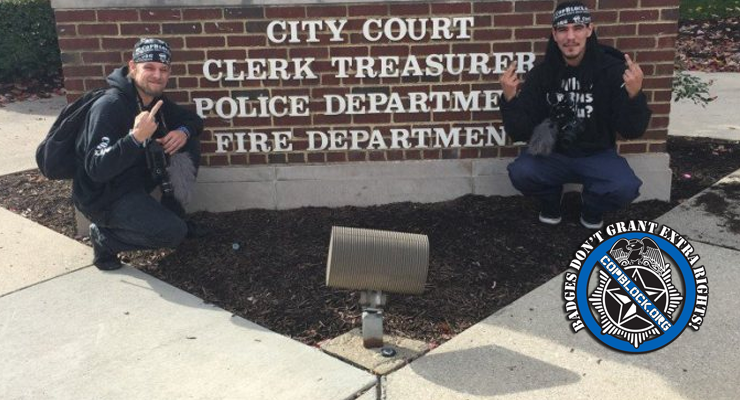 Brian and I have been out of the Hamilton County jail for a little over a week. How we ended up in the county jail is a long story so we’ve detailed how the charges came to be, why we turned ourselves in and why we bailed out at the meta post title, “City of Noblesville vs MAC Crew & Chalk.”

For the purposes of framing the two videos below I’ll say that Brian and I did in fact use children’s chalk outside of the Noblesville Police department in protest of the government monopolized business of protection (ie; the police). Furthermore, we both used traditional sidewalk chalk but I also used another form of chalk we recently acquired from Wal-Mart called, “Liquid Chalk.”

The liquid chalk is alleged to be what hurt the feelings of several Noblesville Police employees who became upset – see them that night in this video – and lead them to push for warrants to be issued for our arrest. Since Brian and I believe these charges to be absurd (especially in Brian’s case, as he NEVER used liquid chalk) we decided to head back to Noblesville, Indiana and turn ourselves in. We did so not by calling the police or walking ourselves into a jail but by once again chalking the Noblesville Police department. You can read the coverage from our ‘capture’ here.

After being transported to the Hamilton County Jail we were booked in and sent off to our cells. Later in the day, around 1 pm, both of us were taken to a room where a video camera and computer monitor were set up. After about a five minute “know your rights” (but not the good kind) video the three other people in the room spoke with a magistrate about their charges (none of which had any victim either, go figure).

Once the room was cleared of the other ‘criminals’ I was called up to the table to speak with one of the King’s men. Below is the 14 minute interaction I had with the local “magistrate.”

My interaction was more like another round of “Who’s On First.” It wasn’t my best courtroom rant but the basic point I was trying to make to “the magistrate” was that they should either sentence me right now or release me at once. The case isn’t that complicated and I openly admit what I’ve done. Now jails were either built for people who chalk public sidewalks or they weren’t. It obviously didn’t work but Brian also had a shot at the King’s man, see video below.

Brian did better than myself, IMO, and his ending was freaking epic – if you missed it click here. In short Brian told the magistrate that if he felt cages were built for chalkers and not rapist, thieves and murderers than may god have mercy on his soul. Of course that didn’t phase the magistrate and he merely ended the hearing, finding that both of us understood our charges and that we should be shuffled off to the next government “justice by assembly” personnel (I say this because each person does a little part, like a few bolts on a car assembly line, and passes you off to the next person).

And that’s where the case is at now, stuck in the slowest, most worthless system the government controls – the justice system. Where anyone would be extremely lucky to find any hint of justice and I know where this is going. We’ll most likely be kept in limbo while we wait for our next pointless court date of December, 8th and then our worthless trial in January. These are worthless because if the charges aren’t dropped before hand (and they like to wait til the last minute) than we’ll be found guilty. Then the County prosecutor will argue that both of us need to be jailed for at least some time to deter us from doing such actions again. They might ramble a little about some restitution that should be paid to the city or some crap about sending a message but none of that will really happen. Brian and I aren’t going to stop chalking police stations and we’re not going to give them money in restitution (which is a bogus bill in the first place – more on that another time).

So what are we doing? IMO, we’re waiting for “justice theater” to play out so that those who’ve never stepped foot into the system, or that believe heavily in it (like those who like Civilians Against CopBlock), can believe that due process, a fair trial and legal sentence were provided to us. The reality is much different than those who are pulling us into this game lead those outside of it to believe. As I noted in my hearing above, the court had already helped the prosecution by issuing warrants for our arrest, the men who will testify us all work for the city (state) and so do those with the court we’ll be judged in. With all of those factors working against us the guilty verdict is a forgone conclusion and since Brian and I can’t stop that, we can only point it out as they run us through it.

This won’t be the last courtroom video of us asking questions and calling out the ‘justice system’ for the rigged game it really is, it’s just the first one. I personally hope they do let us go to a trail. Being able to highlight this corrupt and backwards system is the only justice I’m going to get out of this. Stay tuned for more from Noblesville vs #MACtour.

PLAYLIST OF ALL VIDEOS NOBLESVILLE RELATED: