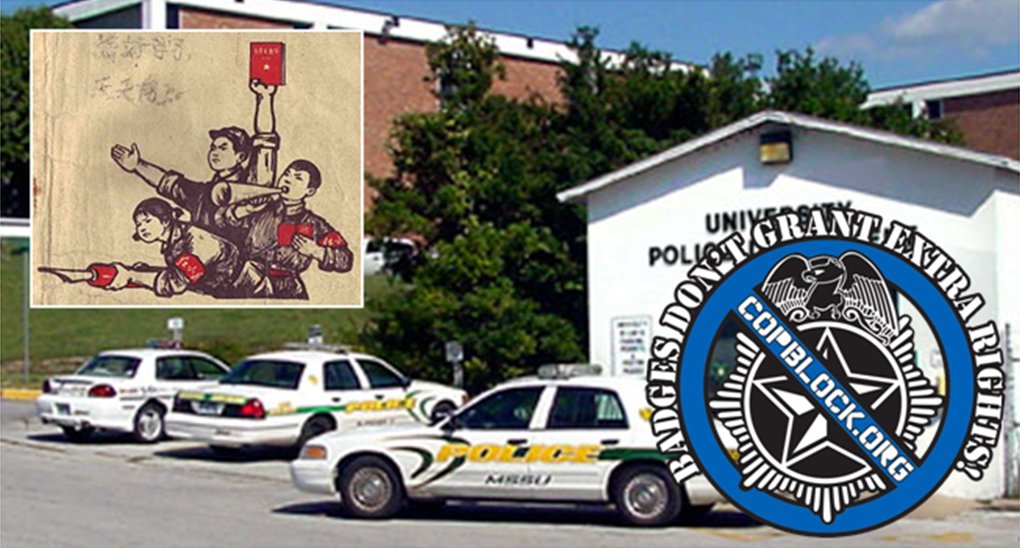 In an epic display of the totalitarian nature of political correctness, “protests” at the University of Missouri have culminated with an email being sent out by campus police urging students to call the cops if they experience “Hateful and/or Hurtful Speech.”

The protests were spurned after the African-American student government president claimed that in September, people in a passing pick-up truck shouted racial slurs at him which prompted other black students to come forward and make similar reports – and black football players to go on “strike” until demands to address racial intolerance at the school were met.

Then, a “poop swastika” was allegedly found smeared across a campus bathroom. Despite no tangible evidence the swastika even exists, the report further emboldened students to speak out against school administrators.

As Milo Yiannopoulos points out in a recent report:

The swastika thing is just an allegation, of course — and anonymous swastikas on campus do have an unfortunate history of turning out to be hoaxes. There have been a lot of campus hoaxes involving black students, of course – though for the sake of politeness you’re not supposed to say so. Normally it involves students who have been ginned up by race hustlers. The most notorious case involved fake rape allegations from Tawana Brawley. What’s remarkable about Missouri is that mere allegations have been enough to topple [the University’s president and a chancellor…]

Some of the alleged racial incidents at Missouri occurred with multiple witnesses. The students at Missouri, in other words, may have legitimate concerns… The chief black activist group on campus, Concerned Student 1950, published an extraordinary list of demands last month…. Among the items on the list, which can be read in full here, was a demand for the (now-former) president, Tim Wolfe, to hold a public press conference to read out a “handwritten apology” to students, and publicly “acknowledge his white male privilege…”

There were also demands for more affirmative action… [with a] greater focus on hiring “persons of color” at the school’s mental health and social justice centres. Because never mind who’s the best qualified to help: what matters is that nurse is a black woman. Indoctrination is also on the agenda. The group demands that the University of Missouri “creates and enforces comprehensive racial awareness and inclusion curriculum throughout all campus departments and units, mandatory for all students, faculty, staff and administration.”

In other words, they want astrophysics students — who should be focusing on exploring and explaining the solar system — to be focused on the politics of racial grievance instead. Oh, and naturally, white people aren’t allowed to decide what’s on the agenda. The demanded curriculum “must be vetted, maintained, and overseen by a board comprised of students, staff, and faculty of color.”

Interesting to note, turns out that Jonathan Butler – a black graduate student and central figure in the protests who went on a hunger strike until Wolf stepped down – is the son of a railroad vice president who made $8.4 million last year, according to filings with the Securities and Exchange Commission.

Now, there is much I could say regarding the disparity of outcomes associated with certain racial minority groups in the U.S. – but to keep you from having to seek out a “safe space” to shield you from things like biological and socioeconomic facts – I’ll just point you to this lecture titled, “How Much Can Discrimination Explain?” by esteemed African-American George Mason University Economics Professor Dr. Walter E. Williams – if you are interested in a more nuanced explanation than just “racism.”

Anyway, where have we seen such student tactics – like the ones being utilized at the University of Missouri before? Where did they originate? I have expanded on this question previously within the broader context of Cultural Marxism in my article, Political Correctness Means A Draconian Police State, but for a more recent historical precedent, we need only look to Maoist/Communist China.

According to award-winning journalist and editor of Whistleblower Magazine David Kupelian, Chairman Mao was the “world’s most politically correct mass murderer.”

“Not to have a correct political point of view is like having no soul.” …those are the words of Mao Zedong, the Chinese communist leader with the extreme distinction of having caused more deaths than any person in human history – 50 to 70 million, more than Stalin and Hitler combined.

Mao was a rabid believer in “political correctness.” In fact, he wrote the book. Mao’s 1967 book – officially titled “Mao Zedong on People’s War” (though better known as Mao’s “Little Red Book”) – became the ultimate authority for political correctness during the 1960s…

A few excerpts from the once-ubiquitous [book (which contain his collected works)] demonstrate just how fanatical Mao was about political correctness – which, whether on an American university campus or a communist dictatorship, amounts to the gradual, long-term conditioning (brainwashing) of the population:

The Red Guards were a mass paramilitary social movement mobilized by Mao in 1966 and 1967 during the Cultural Revolution, but they started out as campus thought police attacking and shouting down anyone that didn’t hold the “correct views.”

The first students to call themselves “Red Guards” in China were a group of students at the Tsinghua University Middle School who were given the name Red Guards to sign two big-character posters issued on 25 May – 2 June 1966. The students believed that the criticism of the play Hai Rui Dismissed from Office was a political issue and needed greater attention. The group of students, led by Zhang Chengzhi at Tsinghua University Middle School and Nie Yuanzi at Peking University, originally wrote the posters as a constructive criticism of Tsinghua University and Peking University’s administration, which were accused of harboring “intellectual elitism” and “bourgeois” tendencies.

However, they were denounced as “counter-revolutionaries” and “radicals” by the school administration and fellow students, and were forced to secretly meet amongst the ruins of the Old Summer Palace. Nevertheless, Chairman Mao Zedong ordered that the manifesto of the Red Guards be broadcast on national radio and published in the People’s Daily newspaper. This action gave the Red Guards political legitimacy, and student groups quickly began to appear across China.

Due to the factionalism already beginning to emerge in the Red Guard movement, Liu Shaoqi made the decision in early June 1966 to send in Communist Party of China (CPC) work teams. These work groups were led by Zhang Chunqiao, head of China’s Propaganda Department, and were the attempt by the Party to keep the movement under its control. Rival Red Guard groups led by the sons and daughters of cadres were formed by these work teams to deflect attacks away from those in positions of power towards bourgeois elements in society, mainly intellectuals. In addition, these Party-backed rebel groups also attacked students with ‘bad’ class backgrounds (these included the children of former landlords and capitalists). These actions were all attempts by the CPC to preserve the existing state government and apparatus.

Mao, concerned that these work teams were hindering the course of the Cultural Revolution, dispatched Chen Boda, Jiang Qing, Kang Sheng, and others to join the Red Guards and combat the work teams. In July 1966, Mao ordered the removal of the remaining work teams (against the wishes of Liu Shaoqi) and condemned their ‘fifty days of White Terror’. The Red Guards were now free to organise without the restrictions of the Party and, within a few weeks, on the encouragement of Mao’s supporters, Red Guard groups had appeared in almost every school in China.

In other words, students in places like Missouri and Yale University – where they were recently filmed shrieking at a professor who refused to denounce Halloween costumes, are willful dupes in the Cultural Marxist/Red Guard program to denounce all opponents of the socialist narrative of institutional victimization.

These people actually think they are fighting the establishment. Truth is however, they are the establishment. One might think “progressives” who once heralded the slogan “question authority,” and claim to be promoters of diversity, would welcome diversity of thought – but as we can see from recent footage recorded in Missouri, they will literally call for police to arrest you – even if you are a journalist just trying to document their protest.

Obviously, cops are fine with that. In response to the feigned outrage at the University, campus police sent out an email to students on Tuesday stating the following:

To continue to ensure that the University of Missouri campus remains safe, the MU Police Department (MUPD) is asking individuals who witness incidents of hateful and/or hurtful speech or actions to:

Delays, including posting information to social media, can often reduce the chances of identifying the responsible parties. While cases of hateful and hurtful speech are not crimes, if the individual(s) identified are students, MU’s Office of Student Conduct can take disciplinary action.

As the email points out, “hateful” or “hurtful” speech is not a crime. So what business do police have harassing students every time someone gets their feelings hurt?

So campus cops aren’t going to arrest anybody, they will only be utilized to pass reports on to the university – which can take action under its Code of Student Conduct that may effectually ruin students careers by expelling them if they offend someone.

This will obviously have a chilling affect on speech at the campus and is just what the Maoist Red Brigades want. It would seem that the promotion and calls for tolerance from Missouri students really mean no tolerance at all. Read this ACLU report for more on why campus speech codes undermine free-speech and civil-liberties – and are not a good idea.